The Best FIFA Football Awards 2019: Lionel Messi won the Men's Player of the Year award while Megan Rapinoe bagged the top honours in the women's side.

The Best FIFA Football Awards 2019 HIGHLIGHTS: Catch all the live updates from FIFA’s The Best Awards, which is being held at La Scala in Milan, Italy, through News18 Sports’ live blog. Lionel Messi and Megan Rapinoe picked up the top honours at the star-studded ceremony in Milan’s famous opera house. Messi beats Virgil van Dijk and Cristiano Ronaldo to win The Best Men’s Player award while Rapinoe beat Alex Morgan and Lucy Bronze to win The Best Women’s Player award.

Messi won the La Liga with Barcelona last season and reached the semi-finals of the Champions League, where his team was defeated by Virgil van Dijk’s Liverpool. Liverpool eventually won the Champions League. Rapinoe, on the other hand, won the Women’s World Cup 2019 with the United States and also bagged the Golden Boot and Golden Shoe for being the best player and the top scorer of the tournament.

"Can't tell how good this feels. Messi can give me a heads up, had it so many times. I am at loss of words, that rarely happens."

She thanks her parents, her twin sister, her girlfriend. She dedicates the award to Jill Ellis and her US team. "Thank you for putting up with my s*it."

"The crowd we had (at the World Cup) was amazing. Raheem Sterling and Koulibaly, amazing performances on the field, but the way they have taken on the disgusting racism they have had to deal with. The Iranian woman who eventually set herself on fire. The LGBQT players. These are the stories that inspire me but also make me sad. If we want change, people other than Sterling and Koulibaly, would be as outraged about racism. People other than LGBQT outraged about homophobia. To all people here, use this beautiful game to actually change the world for better. We have incredible power in this room."

The United States icon Megan Rapinoe wins The Best Women's Player award. Rapinoe, who won the World Cup with US, also bagged the Golden Ball and Golden Shoe at the mega event in France.

Gianni Infantino said they have assurances from Iran that women will be allowed inside the stadiums in Iran for men's football as early as the next international matches.

FIFA president Gianni Infantino has come to the stage to announce the Men's Player award and takes this opportunity to speak against racism. He spoke about racism incidents in the Italian league and says they have to fight it.

Cristiano Ronaldo has not attended FIFA's The Best award and so his name was not announced on the stage while everybody stood behind and came to the forefront as their names were called out.

Congratulations to all! Well deserved! 👏🎉🎊

The World Cup winner Jill Ellis wins The Best Women's Coach award. She guided the United States to back-to-back victories in the World Cup and is the first coach ever to win two Women's World Cup.

She thanked her parents and credited them for entering this field. She called winning the award after two back-to-back World Cups a  "crazy ride".

Liverpool and Brazilian goalkeeper Alisson Becker has won The Best Men's Goalkeeper award. Along with his laurels with Liverpool, he also won the Copa America with Brazil.

Congratulations to all! Well deserved! 👏🎉🎊

In her acceptance speech for The Best Women's Goalkeeper award, Sari van Veenendaal said that from a young age she wanted to be one of the world's best footballers. Now she has the hardware to prove it. 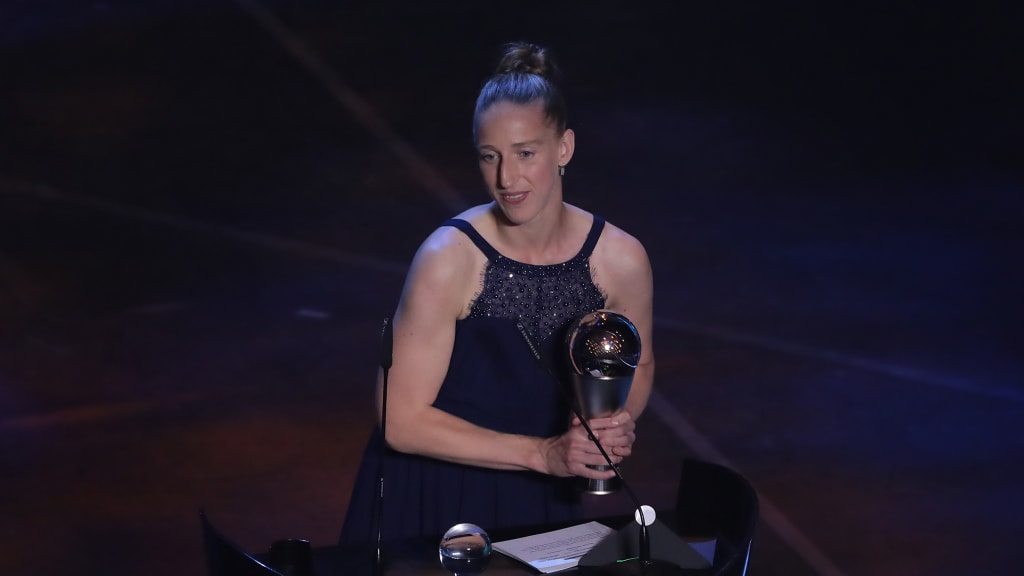 A classical music performance just got over at the Milan's Opera House. We will return to the awards now.

Marcelo Bielsa and Leeds United squad wins the FIFA Fair Play award. During their Championship match against Aston Villa, they needed a win to qualify for the Premier League. With an Aston Villa player down, Leeds had scored a goal but understanding the situation, they let Aston Villa score back and the match ended 1-1.

Sari van Veenandaal wins The Best Women's Goalkeeper award. She was one of the integral parts of Netherlands' Women's World Cup campaign, where they reached the final.

The Best Fan award goes to Silvia Grecco. She is the Palmeiras fan who narrates the matches to her blind son Nicolas.

Juergen Klopp thanks his family first. He remembers the Champions League final and said it was close and Liverpool won it, which is why Pochettino was not standing with the award. He went on to congratulate Pochettino for a great season. He had only words of praise for his team Liverpool.

Klopp led his team to Champions League win and second in the Premier League.

The FIFA Puskas award, which is won by the best goal of the year, goes to Daniel Zsori. He scored the scintillating bicycle kick on his Hungarian league debut, just minutes after coming on as substitute.

One of the presenters thanks Megan Rapinoe for her speech after the US team returned home with the World Cup, where Rapinoe preached the ideal of 'love more, hate less'.

Megan Rapinoe and Alex Morgan shone together at the Women's World Cup in France earlier this year and with both of them nominated for The Best Women's Player award, they are at the awards together as well.

The award function begins with an opera performance at Milan's Opera House. There was no better way to begin the show. It is followed up by a ballet performance.

Lionel Messi poses for a photograph with his family. Messi is nominated for the The Best Men's Player award and he arrived at the venue a few minutes ago.

Brazilian star Marta, who has won the women's player of the year five times, met a nominee in the FIFA Fan Award.

Silvia narrates matches at the stadium for her blind and autistic son Nikollas. #TheBest | #FIFAFootballAwards pic.twitter.com/AOvByd2TMg

Virgil van Dijk even said it on the green carpet that Liverpool are a team and they do everything together and so the man is happy to be in Milan nominated along with his manager Juergen Klopp and goalkeeper Alisson Becker.

“It’s also very special to be here with the gaffer and Alisson. And we’ll see what it’s going to bring us."@VirgilvDijk intends to soak up every moment of #TheBest #FIFAFootballAwards tonight 🙌

Roberto Carlos had some nice words for the Women's World Cup 2019: "It was the same level as the men's World Cup and the quality at display was amazing."

This year's Women's World Cup was the most successful in history and was won by the United States, starring the Women's Player nominees Megan Rapinoe and Alex Morgan.

The Best Men's Player award nominee Virgil van Dijk says his team (Liverpool) manager Juergen Klopp should win the award. "He should win it. He is the best manager in the world and he knows it."

The Best Women's Player award nominee Megan Rapinoe was asked to sum up the Women's World Cup 2019 in a few words and she had this to say: "Are you entertained!" In a typical Rapinoe style, one can almost imagine her say this in her iconic pose. Here are all the nominees of all the categories in FIFA's The Best Football Awards:

Brazilian legend Ronaldo is at the Green Carpet and he picks Virgil van Dijk for The Best Men's Player award. He says van Dijk has had an incredible year and according to him, the defender deserves the award.

The Best Men’s Coach award went to Juergen Klopp for leading Liverpool to the Champions League victory. Jill Ellis was awarded the Best Women’s Coach award for leading the US to their second consecutive World Cup win. She also became the first coach to win back-to-back Women’s World Cup. Daniel Zsori won the FIFA Puskas award for scoring a stunning bicycle kick in the Hungarian league.

The Netherlands’ Sari van Veenendaal won the Women’s Goalkeeper award for her heroic World Cup performance, that took the Dutch to the final. Liverpool’s Alisson Becker was awarded the best Men’s Goalkeeper honour. Along with his achievements with Liverpool, he also won the Copa America 2019 with Brazil.

Since The Best award was created in 2016, the winner has gone on to also lift the coveted Ballon d’Or, which will be unveiled on December 2. Real Madrid and Croatia midfielder Luka Modric won both awards last year to end Ronaldo and Messi’s ten-year domination. In the past three years the podiums for both awards have been almost identical apart from Egyptian Mohamed Salah’s third place in The Best in 2018, a spot occupied by France’s Antoine Griezmann in the Ballon d’Or.