UEFA Euro 2020 Highlights, England vs Germany: Raheem Sterling scored in the 75th minute as Harry Kane netted the second in the 86th as England avenged decades of hurt at the hands of Germany at Wembley.

England reached the quarter-finals and will take on the winner of Sweden vs Ukraine.

FULL TIME! England beat Germany 2-0 to book their place in the quarter-finals!

Goals from Raheem Sterling and Harry Kane does it for the Three Lions! Wembley is overjoyed. All the years of hurt and emotions have culminated in this...

Fans in the stands belt out 'It's Coming Home!'

The England skipper nods home! Luke Shaw steals the ball from Serge Gnabry as passes it onto Jack Grealish on the overlap. The substitute puts in a teasing centre, as Kane tucks it home.

81' - Thomas Muller misses! What a poor pass from Raheem Sterling as Germany are on the break. Muller is one on one with Jordan Pickford but the German forward shoots wide.

78' - Harry Maguire goes into the referee's book and from the free-kick, which is taken by Thomas Muller, it is blocked by John Stones!

Some fine two-touch passing from England's Sterling and his strike partner Harry Kane, Jack Grealish and Luke Shaw. The Left back threads a low cross into the area for the 26-year-old, who guides it past the Germankeeper and into the corner of the net from close range.

72' - England have gotten into a nice passing rhythm down the right as Robin Gosens breaks up play with a late challenge on Kieran Trippier. The referee pulls out the yellow card.

Bukayo Saka is off and one comes Jack Grealish for England.

Harry Kane have so far been dominated by the German backline... can the England skipper score his first goal of Euro 2020? 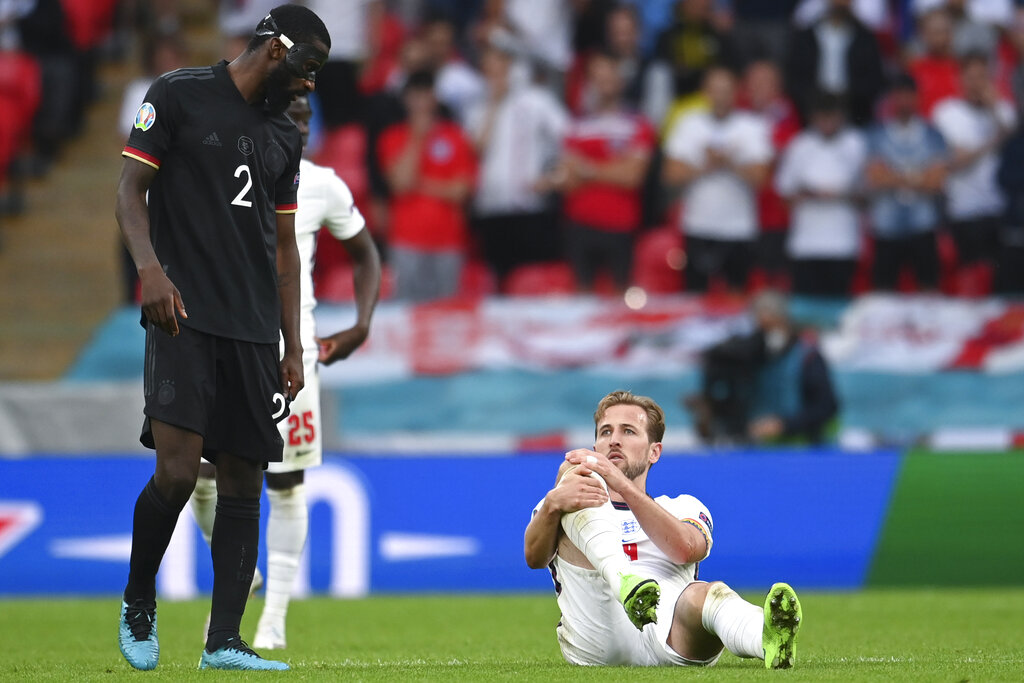 58' - End-to-end action now as Raheem Sterling goes on a meandering run which is thwarted by Thomas Muller on the edge of the box as Kai Havertz goes on the counter and feeds the ball to Timo Werner, as John Stones clears.

53' - Robin Gosens with a beautiful header but he does not get a proper connection even though he got nice height into that jump. Pickford comes out and punches the ball to safety.

England fans are vociferous in their support... 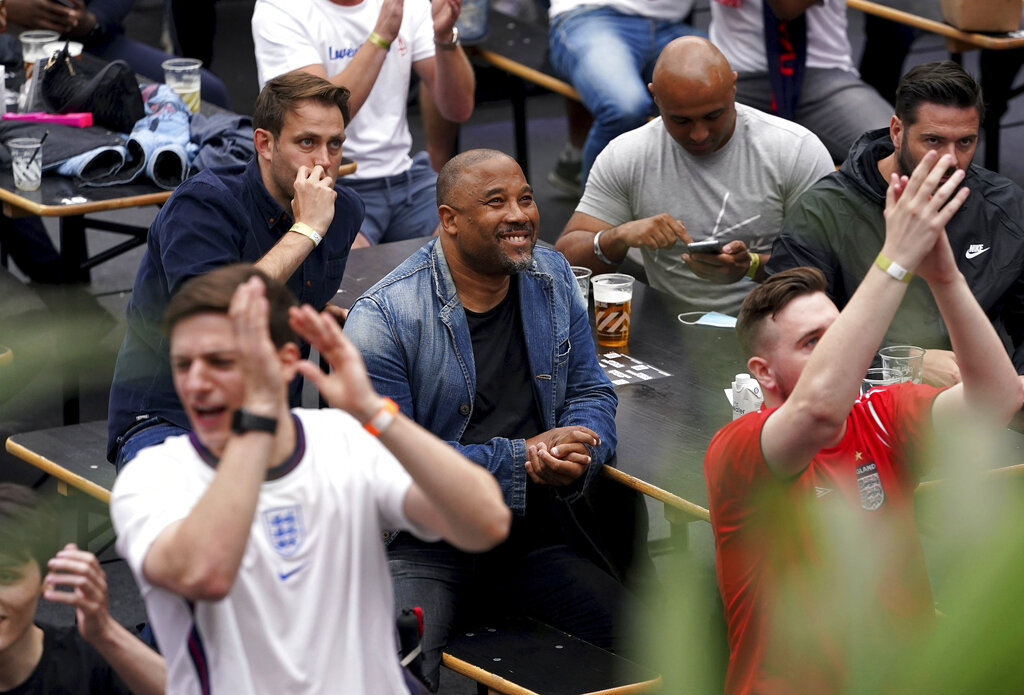 48' - Jordan Pickford with a stunning save from a stinging shot from Kai Havertz. Germany was prodding and probing in and around the England penalty box. Warning signs?

2nd HALF! We are back underway for England vs Germany at Wembley in London!

Who will break the deadlock...

Some really attacking options on the bench for either team.

Some advice for Gareth Southgate

Time to bring on Sancho...

HALF TIME! It is goalless between England and Germany at Wembley in London!

45' + 1' - What an opportunity in the dying seconds of the first half. Harry Kane with a glorious chance but his touch is heavy and Germany fans across the world sigh relief.

45' - Kalvin Phillips goes into the referee's book for his lat tackle on Toni Kroos.

44'- Leon Goretzka brings down Harry Kane from behind after getting on his wrong side to defend.

Kieran Trippier dinks in an early ball from the free kick for Harry Kane but Mats Hummels is alert and heds it out for a corner... from which nothing comes.

39' - Kai Havertz and Kyle Walker get into a race for the ball after it ping-pongs in the mid-field. The Englishman win as Jordan Pickford comes out of his goal to pick it up safely. The referee calls for a free kick though.

32' - Kai Havertz drops deep to collect a pass before turning and splitting the England defence with an incisive through ball for Timo Werner, as he gets in behind the high line of England defence but his shot is saved by Jordan Pickford.

31' - Germany on the front foot after some time as Joshua Kimmich fake shots on his right and crosses the ball into the box with his left but Robin Gosens on the far post can't get to it.

25' - Matthias Ginter goes into the referee's book for tugging at Luke Shaw's shirt.

23' - Bukayo Saka draws a foul from Leon Goretzka in a very promising position...

England's Bukayo Saka has been a handful for the German defence so far down the right... 17' - Raheem Sterling with a decent shot on goal after some quick feet took the ball into the but Manuel Neuer is up to the task!.

From the corner by Kieran Trippier, Harry Maguire thumps a header on target but the Germany keeper makes another save.

13' - Germany's Antonio Rudiger is penalised for a challenge on Bukayo Saka! But nothing much comes from the free kick.

10' - From the resulting free-kick, after some deliberation, Kai Havertz takes a shot laid out by Toni Kroos but Declan Rice, charging out makes the block and it is saved.

8' - Leon Goretzka gets on his bike and drives at the English defence but is cut down on the edge of the box by Declan Rice. The referee books him for the foul.

Britain's Prince William, Catherine Duchess of Cambridge, and their son Geroge in attendance at Wembley! 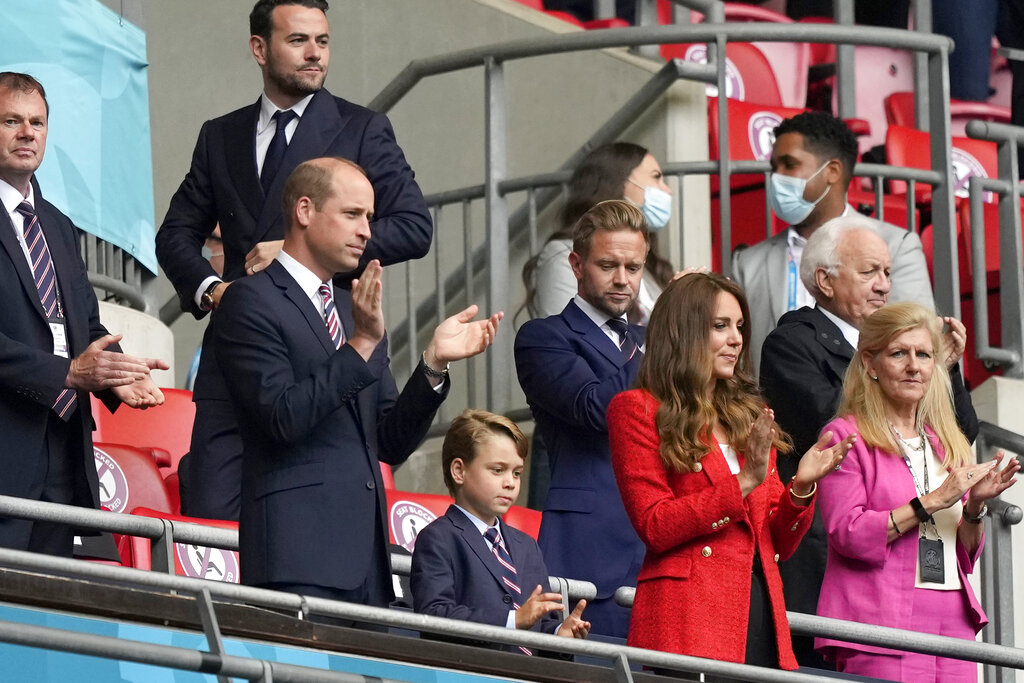 1' - First attack of the match as Thomas Muller concedes a free-kick for a foul on Harry Maguire.

Luke Shaw takes it but it is easily cleared away...

And as soon as Germany get the free-kick cleared, Muller urges his team-mates out of their defensive shape and forward.

It was England‘s first knockout round tournament victory over Germany since the 1966 World Cup final and their first ever knockout round win at the Euros inside 90 minutes.

The goals came after midfielder Jack Grealish was introduced in the 69th minute when the entire tempo and mood of the game changed.

Six minutes after Grealish came on he was involved in a flowing passing move which ended with left wing-back Luke Shaw slipping the ball across the face of the goal for Sterling to slide in his third goal in four Euro 2020 games.

But shortly after scoring Sterling almost gifted the Germans a leveller when he gave the ball away on the halfway line and Kai Havertz sent Thomas Mueller through on goal.

The experienced World Cup-winner had only England keeper Jordan Pickford to beat but dragged his shot wide of his right-hand post, leaving Sterling, who watched in anguish on his knees, to leap to his feet in relief.

After that reprieve, and with the crowd roaring England on, Grealish turned the direct provider for the second goal, crossing from the left for captain Kane to beat keeper Manuel Neuer with a stooping header.

It was Kane’s first goal of the tournament and his return to scoring ways will be another positive for England manager Gareth Southgate as he looks ahead at a potential route to the final.

Southgate’s decision to play a five-man defence and two holding midfielders was a cautious one but England did start the game brightly.

Sterling tested Neuer in the 16th minute, cutting in from the left flank and finding room to unleash a drive towards the far corner which the German keeper did well to get across to.

Much of England‘s probing was coming from Kieran Trippier down the right and he found Harry Maguire in a promising position with a lofted ball to the back post but the centre-half’s header was over the bar.

Germany were enjoying plenty of possession in midfield with England sitting deep but they provided a warning of their threat when Kai Havertz slipped through Timo Werner, although Pickford was out quickly to smother.

Just before the break Matt Hummels had to intervene quickly to clear as Kane looked to pounce after Sterling’s burst into the box had caused chaos.

After the interval Germany sensed England had lost their way and came close when Havertz’s powerful drive was superbly tipped over by Pickford.

The game was in the balance but then came Grealish, whose name had been sung by the England fans throughout the game and who lived up to those hopes and expectations by providing the spark England had been missing.

The visitors’ defeat marked the end of Joachim Loew’s time as Germany coach after 15 years in charge, during which he guided them to the 2014 World Cup title in Brazil.