UEFA Euro 2020 Highlights, Scotland vs Czech Republic, Poland vs Slovakia and Spain vs Sweden: Spain dominated their opening Euro 2020 Group E game against Sweden but could only come away with a 0-0 draw after Janne Andersson’s side showed little ambition in going forward. The Spaniards outclassed Sweden in possession and Alvaro Morata fired a great chance just wide, but it was the Swedes that came closest to scoring as Alexander Isak’s shot was deflected onto a post by Marcos Llorente just before halftime. The second half had even less in the way of creative attacking football as the Swedes did their best to run the clock down while making the occasional break, and Spain could not find a way through the massed yellow ranks of defenders. 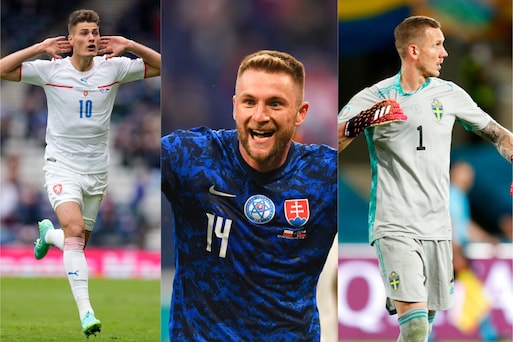 The chances came and went but neither Spain nor Sweden managed to put any of them in the net in a 0-0 draw at Euro 2020.

90' - Robin Olsen is the man of the match! He makes saves another save! Pedri's dink finds the glancing header from Gerrard Moreno was goal-bound but the Swede is there in goal to make a crucial save.

Koke is off and Fabian Ruiz comes on for Spain.

84' - Last roll of the dice from Jan Andersson as Kristoffer Olsson is brought off and Jens-Lys Cajuste as Pierre Bengtsson is on in place of Emil Forsberg.

Sani Olmo and Ferran Torres are brought off as Gerrard Moreno and Mikel Oyazzabal come on for Spain.

Sweden's Mikael Lustig is forced off as Emil Krafth is introduced.

73' - Danielson stands like a rock in front of the Sweden goal and blocks a Daniel Olmo shot after a few intricate passes from Spain.

69' - Marcus Berg and Alexander Isak are off and Viktor Claesson and Robin Quaison come on.

66' - Alvaro Morata and Rodri are off and Pablo Sarabia and Thiago Alcantara come on.

61' - It is now the turn for Marcus Berg to miss as Alexander Isak holds up play and runs deep into the Spain penalty box. he scuffs up the finish and the shot goes harmlessly over.

50' - The memes have started to come in already after Spain's Alvaro Morata misses yet another chance...

Alvaro morata if the goals were 1 feet wider pic.twitter.com/JMeljn2KVY

We are off in Seville for the second half... who will break the deadlock - Spain or Sweden? Meanwhile, Pedri Gonzalez has become the youngest Spaniard to play in a European Championship.

It was only the fifth international appearance for the 18-year-old Pedri, who plays for Barcelona. The previous youngest player for Spain at the continental tournament was Miguel Tendillo. He was 19 years old in the 1980 edition.

Goalless at Half Time! Spain have had the possession and the chances but Sweden had arguably the best opportunity to get ahead.

The score though still reads 0-0.

What changes will Luis Enrique make? Alexander Isak gets the ball with a run down the right channel and gets past a defender to take a shot that ricochets off a Spanish keeper and hits the pot and goes safely into the hands of Unai Simon in goal.

40' - Robin Olsen has faced a few shots and attempts on goal but the Swede stand stall.... for now.

Sweden finally get forward with Marcus Berg holding up the ball and forcing a throw with results in a corner. Emil Forsberg takes it and Albin Ekdal tries to take a shot at the goal from the cleared ball but only manages to hit Pau Torres, who clears.

26' - Spain have been relentless with the pressing as they get the ball almost instantly when they do lose it. Sweden have found it hard so far to get away from their own half.

16' - What a save! Daniel Olmo, his near-perfect timed runs meets the cross from deep from Koke but Robin Olsen in the Sweden goal makes a superb save diving down to his right.

Right-back Mikael Lustighead Ferran Torres' cross behind for a corner, which is taken by Koke. The initial header away falls to Daniel Olmo, whose shot flies over the bar.

Kick-Off! Spain and Sweden get us underway in Seville!

Teenage midfielder Pedri was a surprise inclusion in Spain's starting team for their Euro 2020 Group E opener against Sweden as coach Luis Enrique opted for the flair of the Barcelona playmaker over the experience of Thiago Alcantara and Fabian Ruiz.

The coach stayed loyal to Alvaro Morata in attack, the centre forward keeping his place in the side despite being booed by home supporters in the last warm-up friendly against Portugal.

Sweden coach Janne Andersson's main dilemma was picking a strike partner for the experienced Marcus Berg and he went for Alexander Isak over Robin Quaison, banking on the striker's prolific form for Real Sociedad last season. 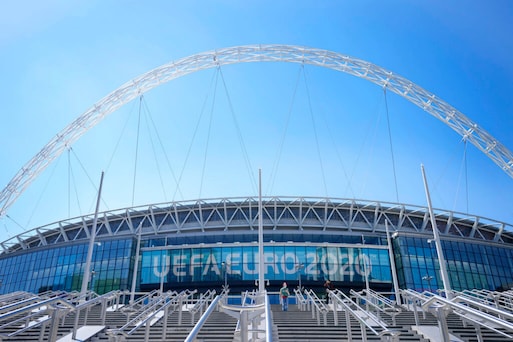 Euro 2020 semi-finals and final at Wembley will form part of the government's 'Events Research Programme' that gives them flexibility to have the rules on public gatherings to be suspended.

🗒️ Danielson in the centre of defence with Lindelöf for Sweden; Berg is joined by Isak up front...

The Inter defender had plenty to do in front of a line of Poland players between him and the goal as he turned sharply and blasted a low strike that was out of the goalkeeper's reach and went inside the right-hand post.

Skriniar beat Wojciech Szczesny with a low drive in the 69th minute, capitalising on the sending-off of Polish midfielder Grzegorz Krychowiak following a second booking for a challenge on Jakub Hromada.

Poland’s woes began in the 18th minute when a strike by Robert Mak bounced off Szczesny’s near post and slipped into the net after hitting the goalkeeper. The Poles equalised seconds after halftime through Karol Linetty, a surprise starter in Paulo Sousa’s team.

Patrik Schick gave the Czech Republic the lead in the 42nd-minute and then doubled it in the 52nd with a stunning strike as they beat Scotland 2-0, who are playing their first major international tournament after 23 years at Hampden Park in Glasgow.

Patrik Schick scored twice, including an extraordinary 45-metre effort from just inside the halfway line, to give the Czech Republic a 2-0 win over Scotland in their European Championship opener at Hampden Park on Monday.

Schick put the Czechs in front three minutes before half-time as he towered above two defenders to power home a header, but his second goal seven minutes into the second half will almost certainly be one of the tournament’s greatest.

A blocked effort in midfield saw the ball fall to Schick, who spotted Scotland goalkeeper David Marshall off his line and fire an audacious long-range left-footed lob that curled through the air with unerring accuracy to thunder into an empty net.