Euro 2020 Quarter-final Highlight, Czech Republic vs Denmark: Thomas Delaney handed Denmark the lead in the fifth minute as Kasper Dolberg added the second in the 42nd and Patrik Schick pulled one back in the 49th minute for Czech Republic in the Euro 2020 quarter-final at the Baku Olympic Stadium. The Czechs defeated the Netherlands 2-0 in the Last 16 as Denmark thrashed Wales at the same stage.

Denmark will take on the winner of the last quarter-final: Ukraine vs England.

FULL TIME! They have done it... they have held on. Denmark beat Czech Republic 2-1 to book their spot in the semi-final!

Thomas Delaney and Kasper Dolberg scored a goal each to give Denmark a 2-1 win over the Czech Republic and a spot in the European Championship semifinals.

Denmark has developed into a surprise contender at Euro 2020 after its tournament began with midfielder Christian Eriksen suffering cardiac arrest on the field in the team’s opening game.

Denmark hasn’t gotten this far at a major tournament since winning the European title in 1992.

Delaney scored with a header in the fifth minute and Dolberg made it 2-0 in the 42nd. The Czechs got one back from Patrik Schick in the 49th. It was Schick’s fifth goal of the tournament.

Denmark will play either England or Ukraine in the semifinals on Wednesday at Wembley Stadium in London.

86' - The game has become a bit violent in the challneges as both teams get desperate.

Tomas Kalas is booked for his flying challenge on Christian Norgaard.

81' - Anything you can do... as Denmark also make two more changes!

Thomas Delaney and Andreas Christensen are replaced by Mathias Jensen and Jaochim Andersen.

80' - Two more changes for Czech! Patrik Schick and Petr Sevcik are brought off and on come Matej Vydra and Vladimir Darida.

78' - The two Danish substitutes, Yussuf Poulsen and Daniel Wass, combine! Wass passes \the ball at the edge of the Czech penalty box as Poulsen takes a shot but it is saved by a flying Tomas Vaclik.

Many Czechs took a break amid cleanup efforts following a tornado to watch the Euro 2020 quarterfinal match between the Czech Republic and Denmark.

Dozens of local residents and volunteers were sitting mostly on the ground in front of the damaged school in the town of Moravska Nova Ves watching the game on a big screen and drinking beer.

A rare tornado believed to be the most devastating in the Czech Republic’s modern history tore through the country’s southeast last week. Six people were killed and hundreds injured. 71' - Jens Stryger Larsen is brought off and Daniel Wass is introduced by Denmark. Three changes made by either side so far...

65' - Ondrej Celustka is forced off, with the aid of Vladimir Coufal and Antonin Barak, and in comes Jakub Brabec.

Tomas Soucek too has his head bandaged after Yussuf Poulsen's tearing run into the Czech penalty box from the other half of the field.

60' - With the introduction of the new players, after the break, has changed the complexion for the Czechs.

Denmark too make two changes as Kasper Dolberg and Mikkel Damsgaard coming off and Yussuf Poulsen and Christian Norgaard are brought on.

49' - GOAL! Patrik Schick pulls one back for Czech Republic against Denmark!

What a first-time finish!

Vladimir Coufal's fine delivery from the right is expertly guided into the net by the Schick and that too through the legs of a Danish defender.

Can Czech Republic make a comeback against Denmark... they trail by 2 goals!

The flag was visible in the Danish fan section during warm-ups before two security personnel moved in and one of them took hold of the flag.

UEFA said Friday that advertising boards from a sponsor using a rainbow motif would not be shown at quarterfinal games in Baku and St. Petersburg.

UEFA said it “requires its sponsors to ensure that their artwork is compliant with local legislation.” 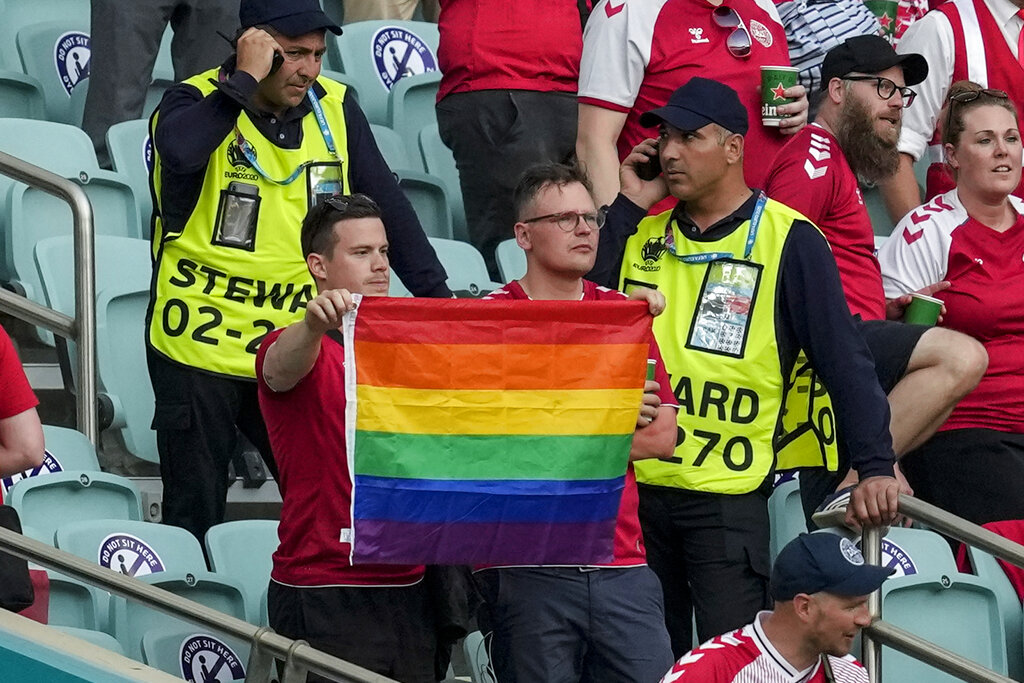 HALF TIME! Goals from Thomas Delaney and Kasper Dolberg the difference as Denmark lead Czech Republic at the break!

Joakim Maehle scampers down the left and puts in a sumptuous curling ball into the middle with the outside of his right foot. Martin Braithwaite fails to make contact but Dorlberg guides it into the roof of the net.

35' Tomáš Holeš in another shooting opportunity after a cross by Coufal but Schmeichel was prepared and saved the shot.#CZE 🆚 #DEN #EURO2020

34' - What play from both sides as Czech Republic have been putting on a lot of pressure, especially down the right, without much to show for... but as soon as Denmark get the ball, they break. The final ball in behind is a bit too heavy and Tomas Vaclik gathers.

Christian Eriksen's name is displayed before the start of quarterfinal match between the Czech Republic and Denmark at the Baku Olympic Stadium in Baku!

26' - Tomas Soucek with a powerful header as he climbs the highest to meet the corner but the effort is wide. The Czech are growing in confidence after the early goal. 22' - Kasper Schmeichel makes a mistake and then makes up for it. He tries to play out of the back but ends up giving it to Tomas Holes, who takes a few touches to run into the 6-yeard box. The Danish keeper scampers out and smothers the effort.

17' - Jens Stryger Larsen and Thomas Delaney combine again down the right but the goalscorer mistimes his kick and his effort goes harmlessly wide.

13' - Pierre-Emile Hojbjerg sends in a beautiful long pass for Mikkel Damsgaard, as the Danish forwards chases the ball towards goal from the right, but is unable to apply the final touch and a combination of the advancing Tomas Vaclik and Vladimir Coufal manage to deflect his effort away from danger!

12' - It has all been Denmark on the attacking front for the opening moments as the Czechs look shell-shocked after conceeding a goal so early in the match.

Jens Stryger Larsen sends in an inch-perfect corner as it lands to Delaney near the penalty spot, who smashes a thumping header that bounces off the turf and into the corner of the net.

3' -  A strong start with both teams not willing to lose an even inch. Czech Republic's Antonin Barak is penalised for a foul on Mikkel Damsgaard of Denmark.

KICK-OFF! Czech Republic and Denmark get us underway at the Baku Olympic Stadium! Denmark fans cheer ahead of the Euro 2020 quarterfinal match against Czech Republic at the Baku Olympic Stadium in Azerbaijan!

They have been a treat at the European Championships! 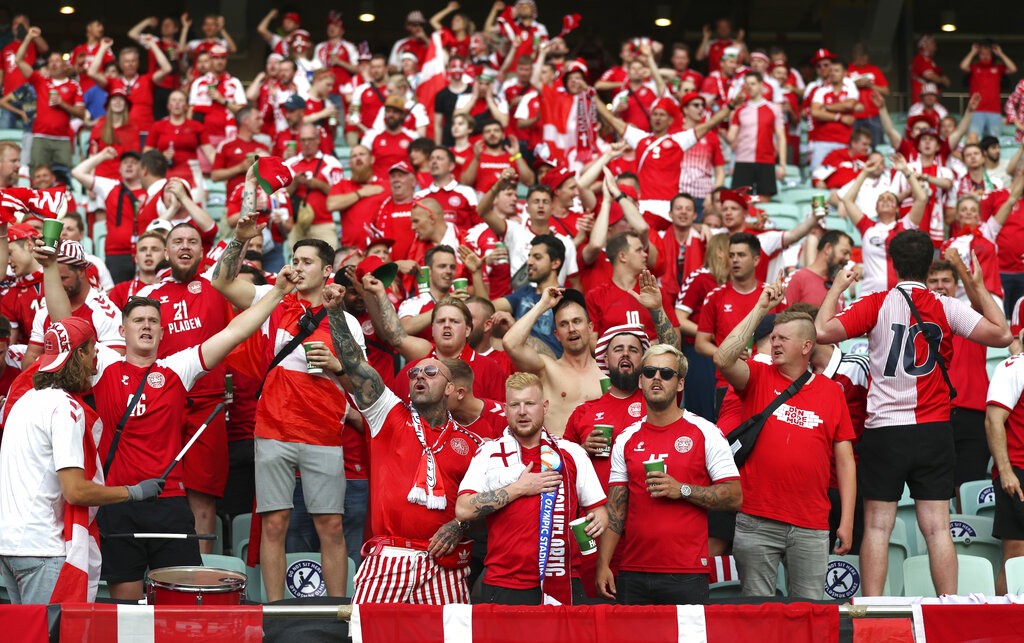 Kasper Dolberg was rewarded for his double against Wales a week ago by retaining his place in the Denmark side for Euro 2020 quarter-final against the Czech Republic in Baku.

Kasper Hjulmand named an unchanged side from the 4-0 thrashing of Wales in Amsterdam despite the return of RB Leipzig forward Yussuf Poulsen from injury.

Czech boss Jaroslav Silhavy makes just one change from his side's impressive 2-0 win over the Netherlands in the last 16 with Jan Boril coming in at left-back for Pavel Kaderabek.

"Denmark are really strong as a team, their style is similar to ours. We have to match them in commitment and approach. One simple mistake can decide the whole match. I believe that it will be us who can take advantage of some of our opponents' mistakes. I think it will be a very tight match and the little things will decide it."

"I can't look anywhere without getting motivated. We're doing it for the whole of Denmark and we have two dreams: to win something and to inspire and excite. We have a framework and philosophy that we stick to but, inside that, there is also space for tactical things, positions, and the skill of the individual players. We always try to find the right framework for the players to work in and, of course, it's the same way with the Czechs."

Patrik Schick scored his fifth goal of the tournament to become the joint-top scorer with Portugal’s Cristiano Ronaldo.

The result avenged Denmark’s 3-0 defeat by the Czechs in the last eight of Euro 2004 and meant they reached the semi-finals for the third time, taking them closer yet to adding to their unlikely triumph at Euro ’92.

Denmark got off to a flying start when Delaney took advantage of slack marking from a corner to head home in the fifth minute, although replays showed the corner should never have been given as the ball had come off a Danish player when it went out.

The Czechs struggled to respond and Denmark missed several chances to double their lead, with Mikkel Damsgaard, Delaney and Martin Braithwaite all spurning decent opportunities.

They eventually scored again at the end of the first half when left back Joakim Maehle delivered an inviting cross with the outside of his right foot which Dolberg side-footed in on the volley, adding to his double in the 4-0 win over Wales.

Denmark had ridden the wave of a raucous home crowd in their three group games in Copenhagen and also enjoyed strong support against Wales in the last 16 in Amsterdam, capturing the hearts of many neutrals after Christian Eriksen suffered a cardiac arrest in their opening game with Finland.

Even though there was a sizeable and noisy Danish contingent in Baku there was a less of a festive mood than in previous games as the players were separated by an atmosphere-sapping running track and sparse crowd in Azerbaijan, where locals have been largely less than enthusiastic about the tournament.

After a poor first half, the Czechs made a double change which instantly gave them more purpose in attack and one of their substitutes Michael Krmencik forced Kasper Schmeichel into a save immediately while moments later Antonin Barak made the keeper make a full-stretch save.

But they failed to build on the momentum and Denmark woke up and defended well for the remainder of the half, ending the Czech Republic’s hopes of reaching a first Euros semi-final since 2004 and a first final since 1996.

They should have put the game to bed as substitute Yussuf Poulsen failed to beat Tomas Vaclik and Maehle was also denied by the keeper at point-blank range but their first-half goals proved just enough to see them through, the Czechs coming closest to levelling when a Barak strike flew just wide.