UEFA Euro 2020 Highlights Croatia vs Spain: Spain have finally conceded a bizarre own goal as keeper Unai Simon missed a pass back to him in the 20th minute as Pablo Sarabia equalised in the 38th minute and Cesar Azpilicueta gave them the lead in the 57th and Ferran Torres netted the third in the 77th against Croatia, but Mislav Orsic got one back in the 85th minute and Mario Pasalic scored in added time, in the Euro 2020 Round of 16 at Parken Stadium in Copenhagen. Alvaro Morata and Mikel Oyarzabal scored in the extra time to make it 5-3.

Spain will face either France or Switzerland in the quarter-final.

FULL TIME! Spain beat Croatia 5-3 in Extra Time to advance to the quarter-finals!

Spain will face France or Switzerland!

What a game! Played at the highest tempo possible and swinging momentum from either team... definitely a spectacle for the neutral fan.

1st Half of Extra Time over!

Is this over or are there more goal in this game...

100' - GOAL! Alvaro Morata gives the lead to Spain against Croatia! What a time to score!

Mikel Oyarzabal with time on the right but his shot is straight at Dominik Livakovic.

92' - Mislav Orsic with a beautiful shot that is just over the crossbar!

Croatia and Spain will play extra time in the round of 16 at the European Championship.

Mario Pasalic scored for Croatia in injury team to make the score 3-3 in Copenhagen.

85' - GOAL! Mislav Orsic gets one back for Croatia against Spain!

The goalline technology alerts the referee as the ball had crossed in the melee at the goalmouth.

84' - Sergio Busquets with a beautiful ball over the top and onto the path for Dani Olmo to run at. He does and tries to score over the onrushing keeper.
Dominik Livakovic though makes a save!

77' - GOAL! Ferran Torres makes it three for Spain against Croatia!

Croatia had almost gone to sleep as play resumed after a break...

72' - Not a Goal! Alvaro Morata puts the ball in the back of the net but the referee calls for offside.

Even when he scores... he doesn't! 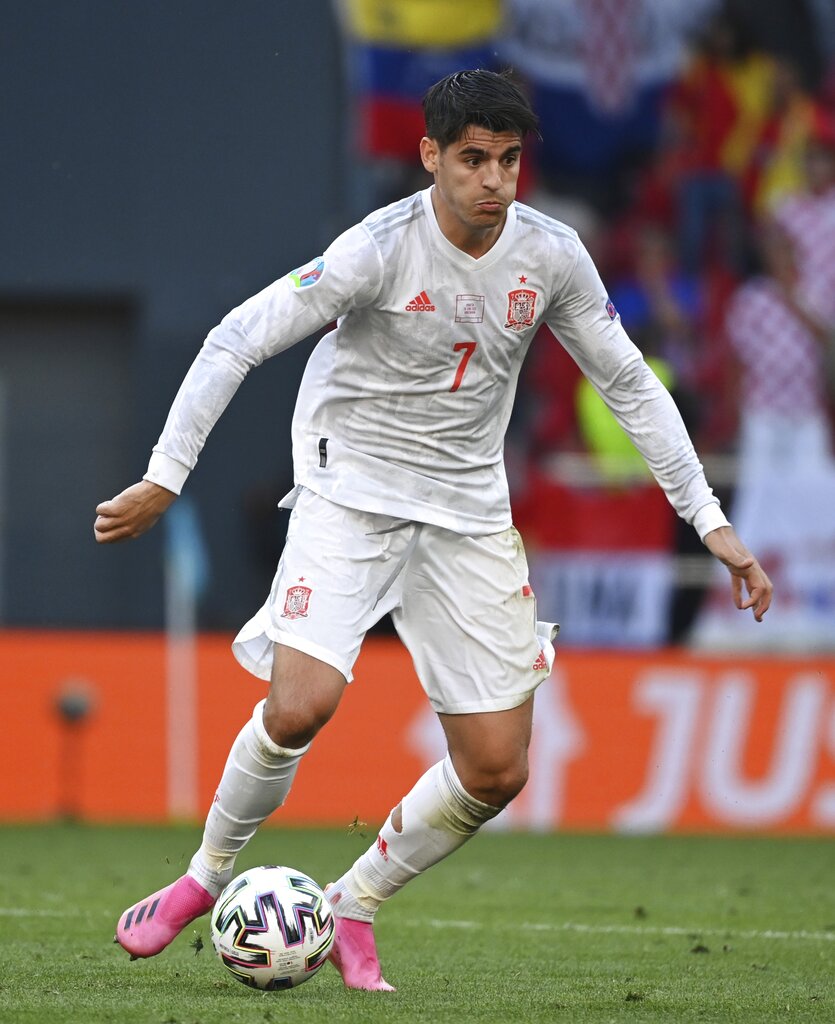 67' - Unai Simon makes a good save getting down to his right with Josko Gvardiol getting a snap shot through as he was being closed down.

Pedri breaks through to the centre, threatening to shoot as the defenders of Croatia are unsettled, which allows Ferran Torres ample space and time to whip in an inviting cross onto the head of Azpilicueta, who makes no mistake and get Spain ahead in the game for the first time in this game.

2nd HALF! We are back for the second 45 for Croatia vs Spain!

It has been Spanish domination for most of the first half but a mistake gave Croatia the lead and then made amends with a superb team goal.

More of the same or will Spain feel the heat from Croatia?

HALF TIME! Pablo Sarabia's equaliser for Spain cancelled out the bizarre own goal that gave Croatia the lead! 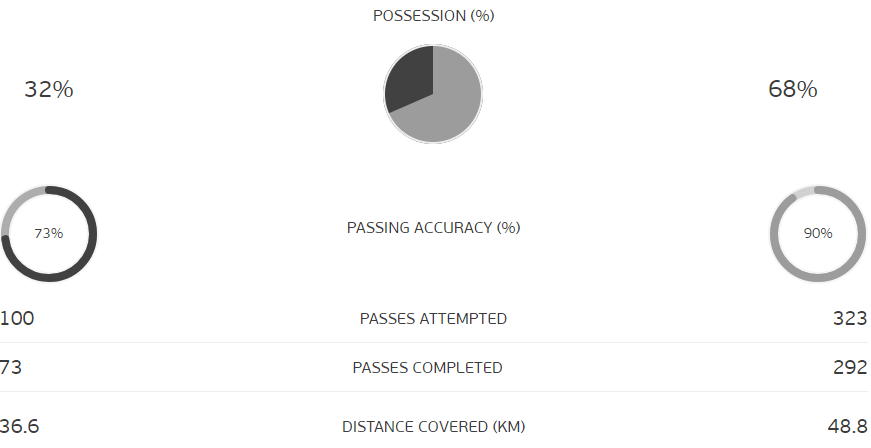 La Roja draw level, as Koke, Pedri and Sarabia combine with quick, intricate passes. Jose Gaya drills in an angled shot from the left that Livakovic only manages to parry as Sarabia blasts the ball into the net from close range.

A mistake is the difference!

29' - Croatia have been far more adventurous after the own goal that gave them the lead. Spain are understandably deflated and their passing too has been wayward since this happened... 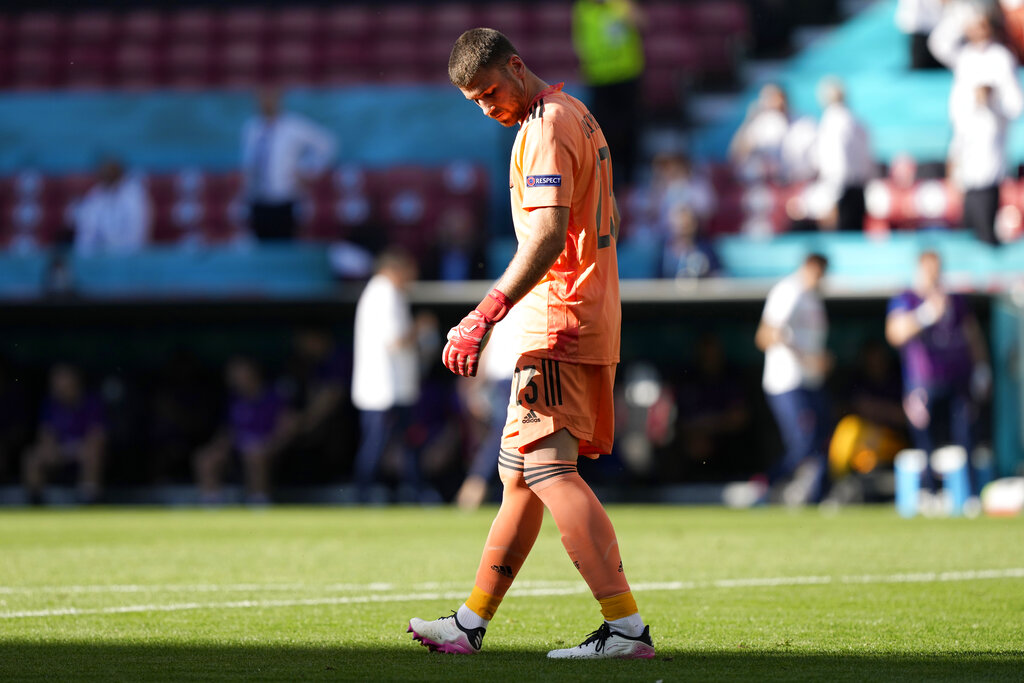 20' - OWN GOAL! What a freak goal as Croatia gets an unlikely lead against Spain!

Unai Simon can't believe his luck! He barely had to do anything up until now but a simple pass back to him costs him. He now has to pick the ball out of his net.

19' - Another chance for Spain! Ferran Torres crosses it in the danger area as Alvaro Morata is the intended taget but he messes it up as Domagoj Vida deoe enough!

16' - What a chance! Koke gets the ball from a beautiful run but his finish is left wanting as Dominik Livakovic again runs out of his goal and makes himself big. The shot hits the keeper and is wide.

13' - Alvaro Morata gets in behind the defence and then back heels the ball to Pablo Sarabia, who takes a first-time shot that ruffled the wrong side of the net.

9' - La Roja have been on the front foot in the opening exchanges of the contest, as Croatia have found it hard to get the ball away from their own half. Interestingly, most of the loose ball has so far landed at the feet of the Spaniards. 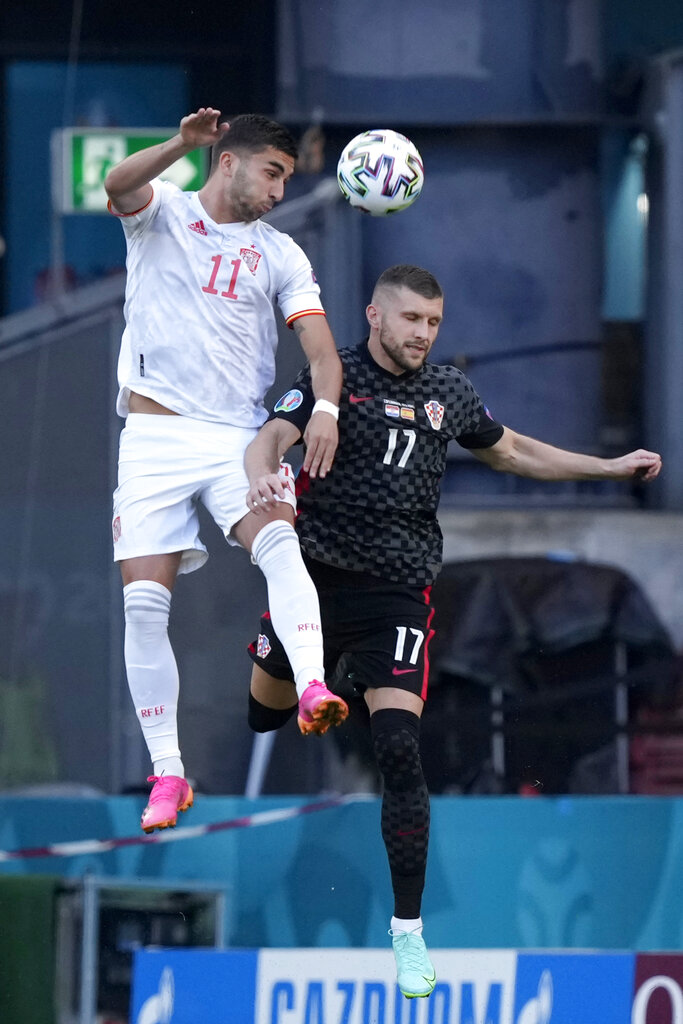 3' - Aymeric Laporte with a beautiful ball over the Croatian defence for Pablo Sarabia but Dominik Livakovic is out of his goal line and catches the ball assuredly.

KICK-OFF! Croatia and Spain get us underway at the Parken Stadium in Copenhagen!

We have a really mouth-watering clash on our hands.

Another record for Pedri!

Spain manager Luis Enrique made two changes to his starting lineup for their Euro 2020 last 16 clash with Croatia from the side that hammered Slovakia 5-0 in their final Group E match.

Ferran Torres, who netted against the Slovakians, replaces Gerard Moreno up front and will play alongside Alvaro Morata and Pablo Sarabia, while Jose Gaya comes into the left back slot instead of 32-year old stalwart Jordi Alba.

Captain Sergio Busquets will continue to pull the strings in a three-man midfield including Koke and Pedri.

Ante Rebic starts on the left flank for Croatia, replacing Ivan Perisic, who is in self-isolation after contracting COVID-19 following their 3-1 win over Scotland in the final Group D match.

Duje Caleta-Car replaces the suspended Dejan Lovren in the centre of defence and attacking midfielder Nikola Vlasic gets the nod again as coach Zlatko Dalic deploys an adventurous formation to face the Spaniards.

🚨 OFICIAL | ¡¡YA TENEMOS NUESTRO ONCE INICIAL!!

Spain fell behind in the first half to a Pedri own goal from near the halfway line after an incredible error from keeper Unai Simon but they looked on their way to a comfortable victory with goals from Pablo Sarabia, Cesar Azpilicueta and Ferran Torres.

Yet Croatia staged an unthinkable comeback with goals from Mislav Orsic in the 85th minute and a Mario Pasalic header in added time to force the extra period.

Spain showed tremendous character though and prevailed thanks to Morata’s superb strike in the 100th minute and a goal from Mikel Oyarzabal in the 103rd.

Spain celebrated a first knockout win in a major tournament since winning Euro 2012 to set up a quarter-final against France or Switzerland in St Petersburg on Friday.

Croatia head home with their heads held high but are still waiting to win a knockout game at a Euros.

Morata has been the centre of attention of Spain’s campaign amid inconsistent performances and criticism from his own supporters, which took an ugly turn during last week’s 5-0 win over Slovakia.

His wife and children were threatened by supporters in Seville and he complained of facing death threats before the game, prompting coach Luis Enrique to urge police action.

Morata has been accused of having a fragile disposition but showed real leadership when Spain’s confidence was on the floor, controlling a Dani Olmo cross with one foot before blasting into the roof of the net.

His team mate Simon also compensated for his first-half howler, making a superb save to thwart Andrej Kramaric early in extra-time.

Substitute Oyarzabal struck moments later to increase Spain’s lead and this time Croatia had no response.