Euro 2020 Semi-final Highlights: England beat Denmark 2-1 in Extra Time and will take on Italy in the final.

Euro 2020 Semi-final Highlights England vs Denmark: Mikkel Damsgaard handed the lead to Denmark in the 30th minute with a beautiful freekick as Simon Kjaernetted an own goal in the 39th as Harry Kane gave England the lead in the extra time in the second semi-final at Wembley stadium. England had defeated Ukraine 4-0 in the quarter-final as Denmark got the better of the Czech Republic 2-1 at the same stage.

England will take on Italy, who beat Spain via penalties, in the final.

They have done it!

England book spot in Euro 2020 final vs Italy with 2-1 win over Denmark in extra time!

England captain Harry Kane’s penalty kick was saved by goalkeeper Kasper Schmeichel but the forward scored from the rebound in the 104th minute.

Denmark played the second half of extra time with 10 men because substitute Mathias Jensen came off injured and the team couldn’t make anymore changes.

England will face Italy in the final at Wembley Stadium on Sunday.

The #ThreeLions are EURO finalists for the first time! 🤩 pic.twitter.com/AYddcT0xJt

115' - As England look to just keep the ball, Denmark get a shot away through Martin Braithwaite which Jordan Pickford gets down to save. A corner is given, which is also cleared away to safety.

106' - Last 15 minutes of Extra Time begins... Keiran Trippier replaces Jack Grealish, who himself came on as a substitute in the second half in regulation time.

England going to a back three.

HALF TIME in EXTRA TIME!

Harry Kane's goal from the penalty spot has handed the lead for England the lead against Denmark! 104' - GOAL! Raheem Sterling is brought down by Joakim Maehle and the referee calls for a penalty.

Harry Kane steps and slots it past Kasper Schmeichel.

98' - England are throwing the kitchen sink and more at the Danish goal. Kasper Schmeichel is there to block everything as he saves a shot from Jack Grealish.

95' - Two changes for England! Mason Mount and Declan Rice are brought off as Phil Foden and Jordan Henderson come on.

94' - What a ball from Kyle Walker down the right channel for Harry Kane to chase and then take a snap shot at goal. Kasper Schmeichel gets down to his left to make a save from a tight angle for the England captain.

Six minutes added on... enough time for a goal and winner in regulation time!

88' - A final push from Denmark... Thomas Delaney is replaced by Mathias Jensen!

87' - Is this game going towards extra time? 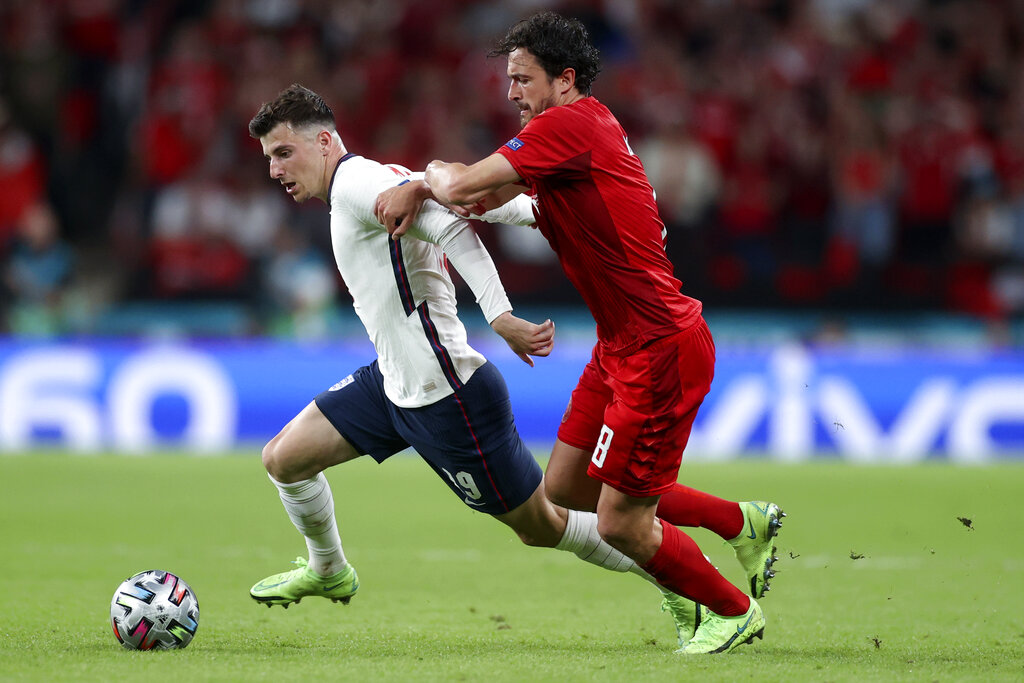 79' - Andreas Christensen makes an important block but stays on the ground. He has to be replaced by Joachim Andersen.

74' - Harry Kane falls to the ground but the referee gives a free kick to Denmark. A VAR check later and the decision still stands.

72' - Yellow Card! Daniel Wass goes into the referee's book for his challenge on Jack Grealish.

69' - England too make a change! Bukayo Saka is brought off as Jack Grealish makes his way onto the pitch! The fans are delirious and are letting the manager know of their approval.

64' - Bukayo Saka and Raheem Sterling tried a one-two as Denmark get the ball clear but only as far as Mason Mount on the penalty area. His curling, right-footed effort is straight into the midriff of Kasper Schmeichel.

59' - Martin Braithwaite's clever stepover allows the ball to reach his fellow forward Kasper Dolberg on the edge of the box. He turns and shoots, but his low effort is straight at Jordan Pickford, who stoops to collect.

55' - Kasper Schmeichel claws out the header from Harry Maguire. Harry Kane was fouled by Joakim Maehleon the right flank by as Mason Mount sends in the free-kick.

52' - Jordan Pickford makes a stunning save, diving down to his right to stop Kasper Dolberg's stinging shot fro mthe adge ofthe penalty box. In the end, it amounts to nothing as the off-side flag is raised.

49' - Yellow Card! A set-piece in a promising position for England out on the right flank, after Jannik Vestergaard impedes the run of Bukayo Saka.

From the free-kick, Harry Maguire is penalised for his arm in the face of Simon Kjaer. The English defender protests but the referee is unmoved.

2nd HALF! England and Denmark get us underway for the second 45 minutes at Wembley!

HALF TIME! All square between England and Denmark!

Denmark midfielder Mikkel Damsgaard gave his team the lead from a free kick in the 30th minute. England equalized when Denmark captain Simon Kjær scored an own-goal in the 39th while trying to stop a cross. 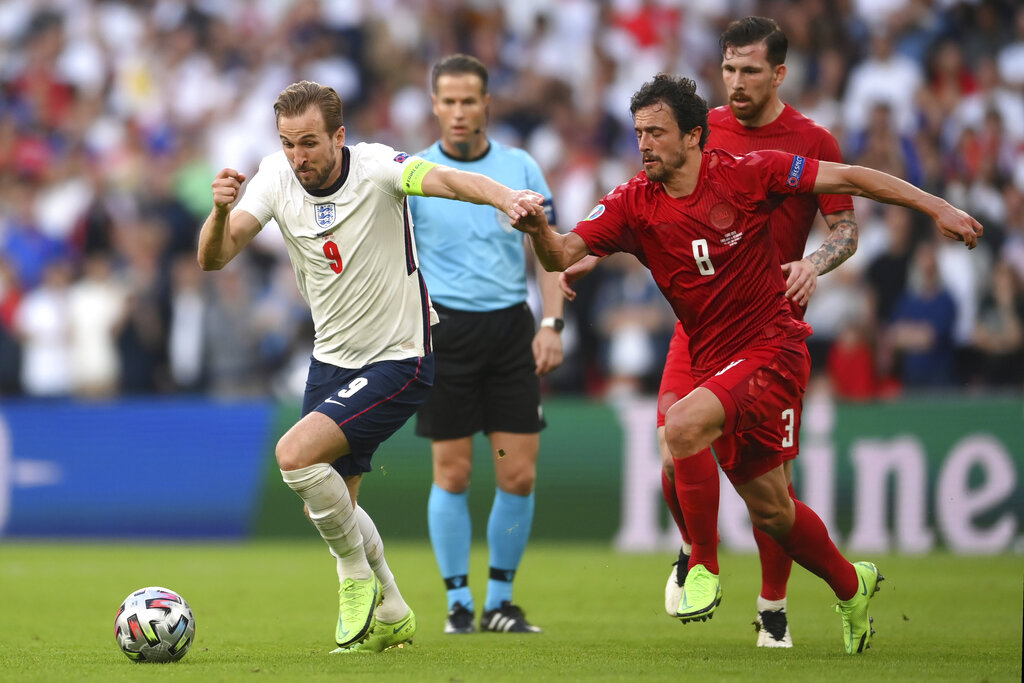 39' - GOAL! Simon Kjaer nets an own goal as England equalise for England against Denmark!

Harry Kane's pinpoint pass dissects the Danish back line for Bukayo Saka to race onto down the flank and he cuts it back for Raheem Sterling, but it hits the Danish skipper and flies into the net.

Barely a minute, 48 seconds actually, earlier, Kasper Schmeichel made a match-winning save as Kane centres the ball for Sterling samshes it but straight to the Danish keeper.

From around 22 metres out and just to the left of goal, Damsgaard steps up and side-foots a curling strike that clears the wall. The flying Jordan Pickford can only get the slightest of touches to the effort, as it sails into the roof of the net.

23' - It has been a midfield battle so far, who will come up on top will be decided by who is the victor in the middle of the field... 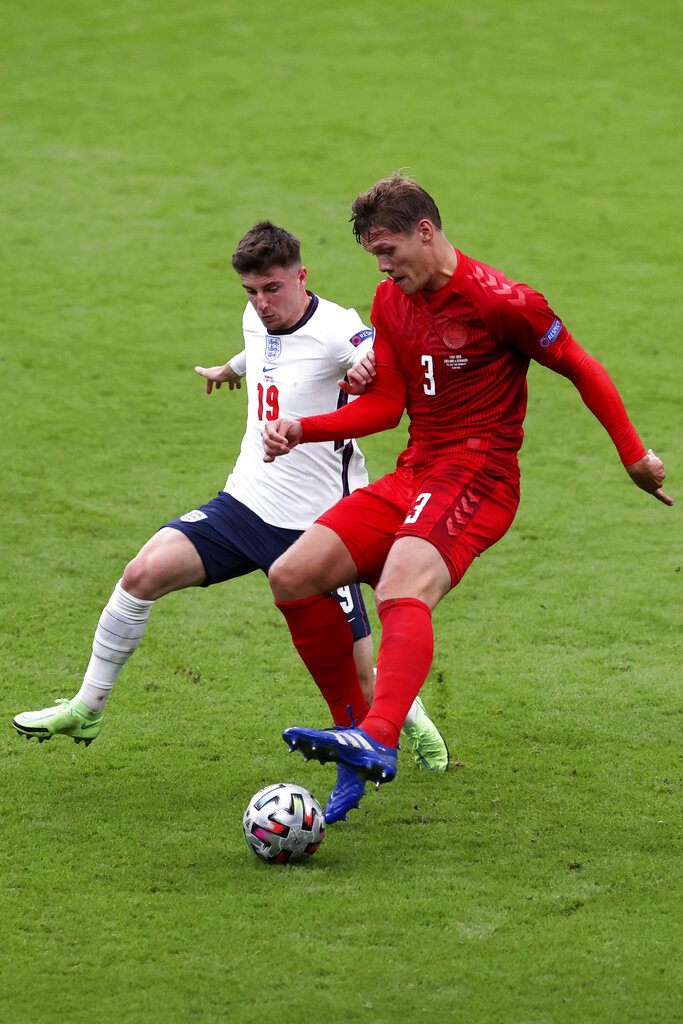 13' - Raheem Sterling collects a pass from Harry Kane on the edge of the penalty box to the left of goal, before cutting into the box and unleashing a low, right-footed drive, which is straight at Kasper Schmeichel.

12' - Mason Mount runs his magic on the right flank, combining brilliantly with Kyle Walker and Bukayo Saka. Denmark though got it away from a corner and cleared from that too.

England won their first semi-final since the 1966 World Cup when Harry Kane’s extra-time goal, following up after his penalty had been saved, earned a 2-1 victory over Denmark on Wednesday that sent them into Sunday’s Euro 2020 final against Italy.

On a night to remember in front of almost 60,000 fans, most of them delirious with joy, England reached the European Championship final for the first time, though they had to come from behind as a Simon Kjaer own goal cancelled out Mikkel Damsgaard’s superb free kick for the Danes in the first half.

The home side were on top throughout but struggled to break down the battling Denmark defence, until they were awarded a penalty in the 103rd-minute after Raheem Sterling went down with minimum contact to allow captain Kane to decide it.

It was a tough way for Denmark to end their emotional ride from the fear and distress of Christian Eriksen’s opening game collapse to their first semi-final since their shock Euro 92 win, but their exhausted players left Wembley with socks rolled down but heads held high.

England will return on Sunday, 55 years after lifting the World Cup there, but they did it the hard way.

They had reached the semis without conceding a goal and it needed something special to pierce their rearguard as Damsgaard fired a powerful, dipping 25-yard free kick over the wall and beyond the diving Jordan Pickford — the tournament’s first goal direct from a free kick — after 30 minutes.

The crowd were stunned, that had not been in the script, and the question of how England would respond to their first real taste of adversity would now be addressed.

The answer was calmly and patiently, as they passed their way back into the ascendancy. Raheem Sterling was denied at point-blank range by Kasper Schmeichel before the 39th-minute equaliser, when Bukayo Saka hit the byline and fizzed over a low cross that Kjaer bundled over his own line in his attempt to stop the ball reaching Sterling.

Schmeichel was on hand again with an excellent diving save to palm away a Harry Maguire header and England began to turn the screw.

However, despite all the pressure and relentless passing and probing around the box, England struggled to carve out a clear opening and the match rolled into extra time.

Sterling continued to drive into the box and was eventually brought down by Joakim Maehle for the VAR-reviewed penalty that Kane stuck poorly and Schmeichel blocked, only for the captain to tuck home the rebound.

England then had to negotiate the last 15 minutes and managed it to spark the loudest, and surely most confident rendition of “Football’s Coming Home”, ever to ring around Wembley.