UEFA Europa League Draw: Manchester United have a seemingly tough semi-final if they win their Round of 16 and quarter-final matches with the draw concluding.

Manchester United's path to the final of the UEFA Europa League will not be easy after they received an easy quarter-final draw but a tough one in the semi-finals. The Europa League draw took place at the UEFA headquarters in Nyon, Switzerland on Friday.

The second leg of Round of 16 is still left but Manchester United are expected to ease past LASK into the quarter-finals. In the last eight, United are drawn to take on either Turkish club Istanbul Basaksehir or Denmark's Copenhagen.

Despite the seemingly easy one in quarter-finals, if United get to the last four, they could have a roadblock.

United, who play Quarter-final 2, will be up against the winner of Quater-finals 4, which involves Olympiacos, Wolverhampton Wanderers, Sevilla and AS Roma. All four can prove to be a handful for the English club.

Inter Milan, on the other hand, will be up against Rangers or Bayer Leverkusen if they get past Getafe into the quarters.

ALSO READ | UEFA Champions League Draw: Cristiano Ronaldo Could be Up Against Real Madrid in Quarter-finals

If they go through to the semi-finals, they are slated to face either of these four - Wolfsburg, Shakhtar Donetsk, Eintracht Frankfurt and FC Basel.

Here is the full draw: 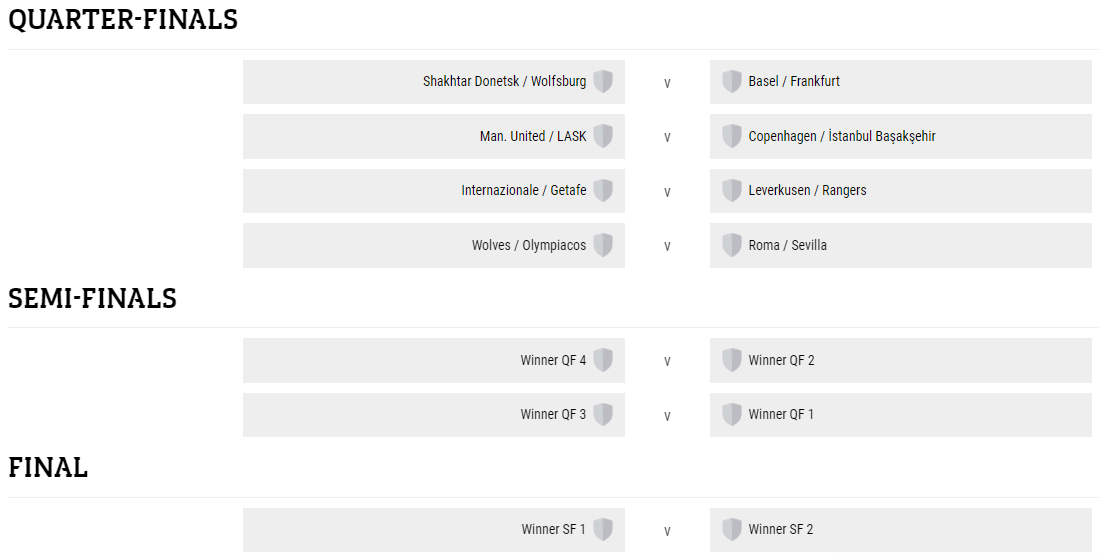 This season's quarter-finals, semi-finals and final will be played as a straight knockout tournament in Germany in August. All these ties will be single-leg fixtures. The games will be split between the following four venues: