Anti-racism demonstrators in Bristol, in the wake death of unarmed black man George Floyd in police custody in Minneapolis, of the pulled down the statue of Edward Colston before throwing it into the harbour.

Six-time Formula One world champion Lewis Hamilton has backed the anti-racism protesters who toppled the statue of a 17th-century slave trader in the English port city of Bristol, and urged governments across the world to take similar action.

In the wake of the death of unarmed black man George Floyd in police custody in Minneapolis, anti-racism demonstrators in Bristol on Sunday pulled down the statue of Edward Colston before throwing it into the harbour.

Across three posts to his Instagram story, Lewis Hamilton wrote: "I challenge government officials worldwide to make these changes and implement the peaceful removal of these racist symbols.

"That man's statue should stay in the river just like the 20 thousand African souls who died on the journey here and thrown into the sea, with no burial or memorial. He stole them from their families, country and he must not be celebrated!" 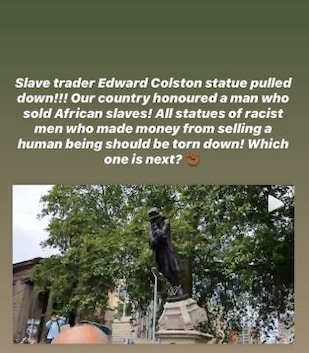 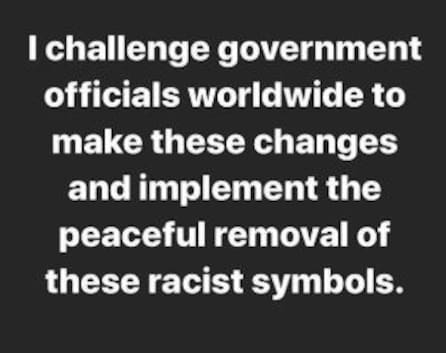 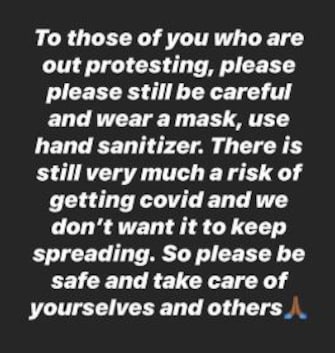 Hamilton, 35, has actively supported the Black Lives Matter movement, calling out his own sport's initial silence over the killing of Floyd, who died after a white U.S. police officer knelt on his neck last month.

He even posted a video of the statue being toppled with the caption: "I do not condone violence or criminal acts but you have had plenty of time to do this yourself and haven't. Power to the people."

Formula One managing director Ross Brawn has backed Hamilton's comments on racial injustice and said the sport was working towards improving diversity at every level.

"Lewis is a great ambassador for the sport and his comments are very valid," Brawn told Sky Sports' The F1 Show. "We support him completely."

Hamilton also strongly criticised the UK government over its handling of the COVID-19 crisis.

Britain has the second-highest death toll in the world from the pandemic, reaching over 40,500 as of Sunday, behind only the United States.

"You should have closed the borders months ago. How you can let people fly in from countries without being tested is baffling," the Mercedes driver said. "You could have saved thousands of lives. We need better leaders."