Desi, self- made popstars who are on a mission to spread their words of wisdom have given rise to India’s newest genre of music—Hindutva Pop. Not quite politics, and not yet a movement. These are songs about Hinduism, nationalism and cow politics. But there is a slight twist: the songs are accompanied with, what they call, 'DJ Music'.

When Laxmi Dubey gets on stage, she often wears a silk turban. A bright red coloured tika is smeared on her forehead. “That’s my signature style,” she says, as she readies for her show in Chhattisgarh. The Bhajan singer from Madhya Pradesh has been performing almost every day in various parts of the neighbouring state that held its Assembly elections last week. “The chief minister had invited me to perform,” she says.

Dubey is the new singing sensation in the country. With a 28-member troop of musicians, dancers and background singers, she is winning the game both online and offline. She gets invited to perform at religious festivals, inauguration ceremonies and often during elections. A video song of Dubey-- Har Ghar Bhagva Chhayga-- posted on YouTube in July last year has nearly 20 million views. The video shows men donning saffron scarf, with a visibly bold ‘Om’ printed on them, around their necks. In flashes, Dubey makes her appearance as she sings, “Bharat ki abhiman hai Hindu, matrumbhumi ki shaan hai Hindu… Gau hatya ko band karenge yeh sankalp hamara hai...” If you aren't paying attention to the lyrics, you will probably headbang to it. Of the 11,000 comments that are posted below the video, almost each of them says, “Jai Shri Raam”.

This musical cocktail of religion and nationalism has been labelled by many as ‘Hindutva Pop’, Dubey calls it, ‘Rashtra Bhajan’. “I was 7 years old when I started singing bhajan. In the last few years, I realized I wanted to work for Hindutva and change the mindset of young people,” she says.

Dubey, who hails from a family of musicians in Bhopal, had never thought that classical bhajans that her grandfather taught her could be combined with beats and ‘DJ music’ to create dance numbers. “But there’s so much demand for this kind of music. The audience loves it. When I start performing, they don’t want me to end the show. The entire crowd dance and sing along with me,” she says.

For Dubey, it was ‘calling of the God’ that made her make an entry in this new genre. Dubey doesn’t work with any particular political party, but she is not shy of wearing her politics on her sleeve. “I am a proud Hindu,” she declares before saying that she is a big fan of Prime Minister Narendra Modi and the Bharatiya Janata Party (BJP) government. Dubey often gets invited by right-wing politicians to perform at shows and feels that she has paved the path for many Indian musicians.

Back in the capital city, two musicians along with their producer, a Hindu Sena worker, have gathered at a small, new recording studio situated in Greater Noida.

Just days after the Supreme Court turned down requests for an early hearing in the Babri Masjid-Ram Janmabhoomi title dispute, twenty-six-year-old Sourav Santani, a member of the fringe right-wing group for over a year, decided to take up the mammoth task of finding musicians, shooting spots, and a studio to record and launch an album titled, “Karo Ram Mandir”. 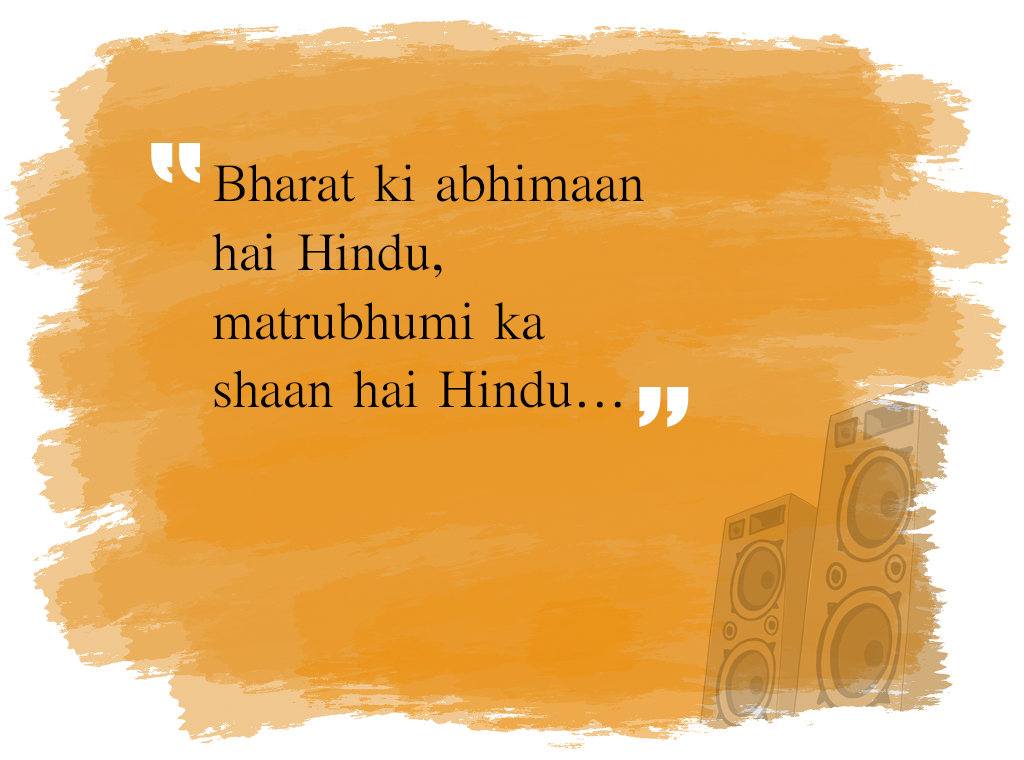 Apart from ‘Gau raksha’ and ‘Raam Mandir’, the album also has a song dedicated to the Hindu Sena. “I am paying for everything,” Sourav says, adding that it will burn a hole of Rs 3 lakh in his pocket.

The two singers that Sourav has found are from his neighbourhood. “They are not charging anything for their work. They are doing it for our country,” he says, smiling at one of the singers, Arya Pawan Pagal. Pawan nods in agreement. “If I can’t do anything for my dharam, my life is a waste,” he says.

The idea, he says, is to create music that will reach the new generation. “The youngsters will reject our songs unless we innovate,” he says. The latest innovation- an entire album on the controversial Ram Mandir is “Our words, their music,” he says, adding that the priority is to ensure that the youngsters dance to their tune.

While Amit Puri Shikohabad, the other singer for the album, has been a fan of classic Bollywood songs – he feels that the time has come to inject change. “If Munni Badnam and the likes can be popular, why can’t these songs be? This is important for the country,” he says.

Hindu Sena chief, Vishnu Gupta, who has courted arrest several times and has most recently demanded that Tipu Sultan Express be renamed, is equally excited. ”It’s time we have a DJ song,” he says, adding that other groups like Bajrang Dal launched their ‘DJ song’ last year. The song has over 100 million views on YouTube and features an animated Lord Ram, Hanuman fighting Ravana while lightning and thunder rage in the background. The music: a combination of techno beats and an intervening ‘Everybody put your hands up’. Unless you hear the rhythmic alternation between ‘Jai Shree Raam’ and ‘Bajrang Dal’, you could very well be dancing to it at a nightclub. 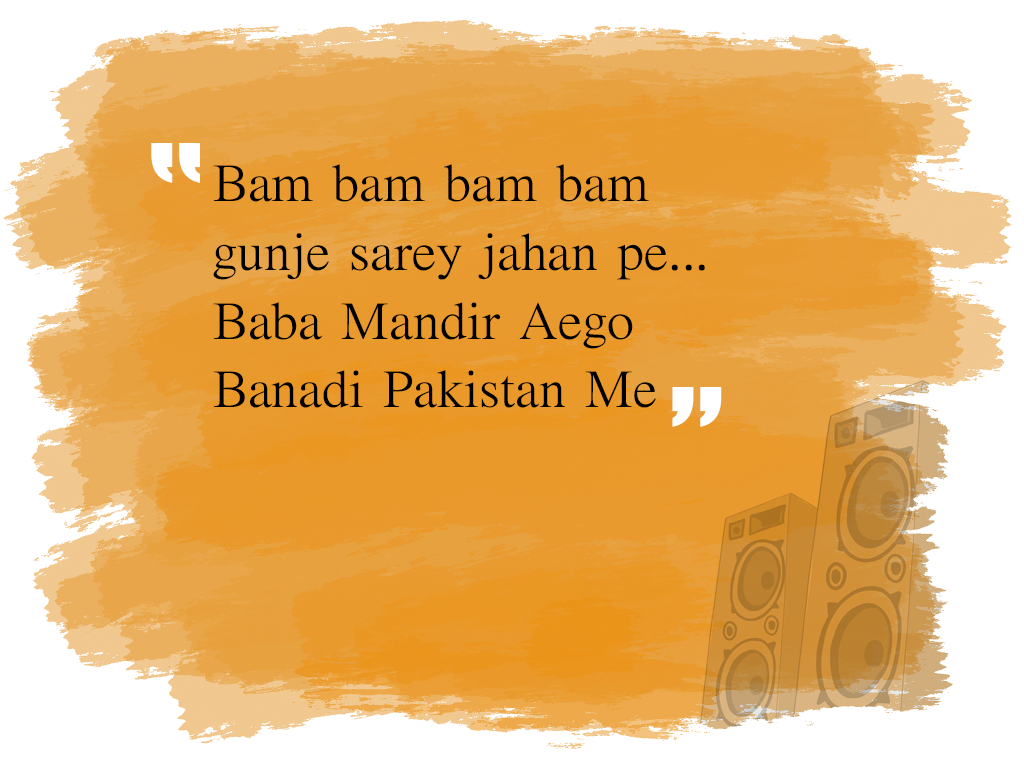 Another right-wing group, Hindu Vahini from Telangana came up with a song earlier this year for their annual Hanuman Shobha Yatra. The song on YouTube has shots of queues of cows, and men holding saffron coloured flags with Lord Hanuman’s face printed on them.

A quick search on YouTube reveals that various songs about Hindu Gods and kings have found a new flavour with ‘DJ music’, techno beats, combined with animation and graphics.

Based out of two floors in a mall in Pitampura area in north-west Delhi, a recording company, Wave Music has become the pioneer in the genre. With over 18 million subscribers on YouTube, its chief operating officer (COO) Parmeet Lamba says, “We will give T-series a tough competition.”

Launched as ‘Sono Tech Casettes’ in 1978, the company would initially produce bhajans and bhakti music. That changed in the next two decades, with a shift towards devotional music with Bollywood tunes. “When a Bollywood song of Abhijit or Alka Yagnik became a hit, the tune would be stuck in people’s minds. We took advantage of that,” he says.

In the last few years, Wave Music has produced songs that fall in the category of ‘Hindutva Pop’ with some of the most celebrated artists in the industry including Akshara Singh, Ritesh Pandey, and Dinesh Lal. Many of them now live in Mumbai and often visit other cities like Bihar, Uttar Pradesh, and Madhya Pradesh to perform. Akshara Singh, one of the celebrity musicians that Wave Music dedicatedly works with, is "nothing less than a superstar," says Lamba. Singh, 25, has grown up in Patna and is quite a rage in the Bhojpuri film industry. Her popularity can be somewhat measured through the sheer number of Instagram followers she has. Four hundred thousand and counting.

Two years ago, Singh had her breakthrough moment with a Bhojpuri song called 'Khola ye rajaji blouse ka button', in which she is seen performing suggestive aerobics in a blouse and a half-draped sari. In another song called 'Tohar Dhodi Ba Phulaha Katori Niyan', Singh dances around in a made-up field while her co-star circles his finger, quite disturbingly, around her navel. At some point, he even pinches here. The video has 30 million views-- that's seven million views more than what one of the biggest channels on YouTube India-- AIB's most popular video, a song called 'Udd Gaye', got.

All of this was till Singh decided to sing as well, only a year ago.

Last year the actor-turned-singer's Bhojpuri bhajan became one of the biggest hits of Wave Music. The video that garnered over 3 million views on YouTube shows Singh dancing to a number that goes like this- "Mandap mein akey, DJ lagake, bhajan bajake.... gawa thumka lagake, nache kamar hilakey..." Amid the choreographed steps, there are shots of Goddess Sherawali and her devotees. Every time Singh sings "thumka lagake" the apparent bhakti video turns into a scene from a pub in Delhi's Hauz Khas area.

When Singh sang the same song at a religious gathering, it was shot again and this time, with a starry effect-- there were pink, blue and green stars shimmering across Singh's face. That song got 296k views on YouTube. 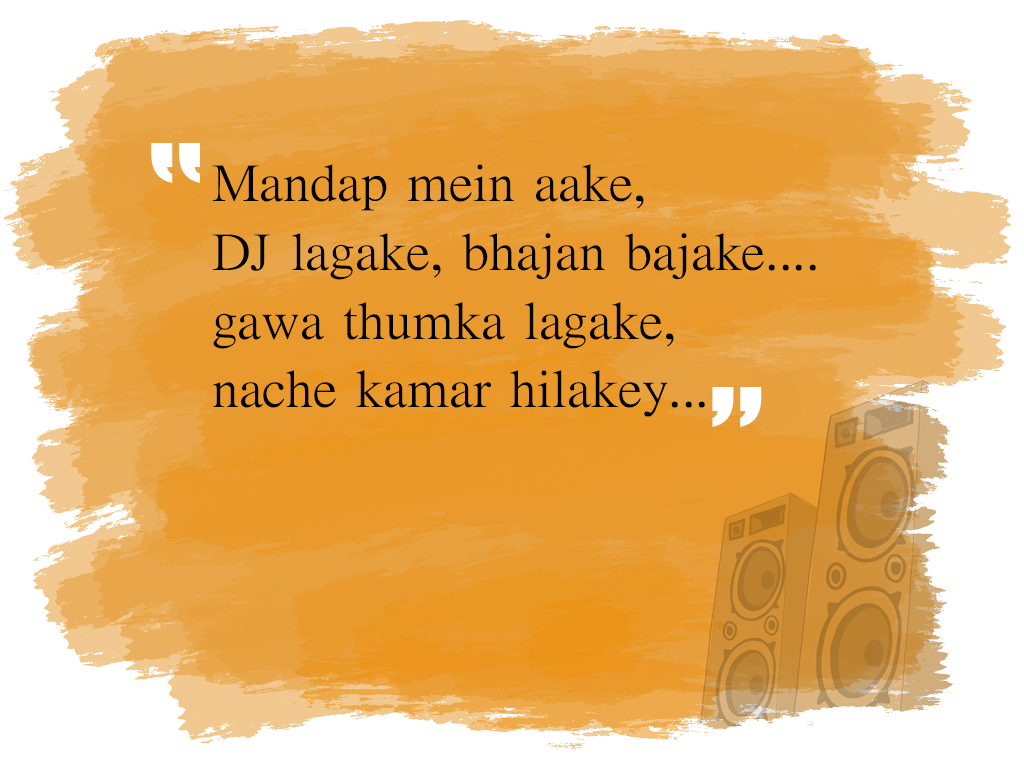 Lamba feels that the reason the genre of Hindutva pop has picked up is because of the penetration of internet in the Tier II and Tier III cities and the low data cost. The recording company’s main audience comes from smaller cities. “It’s about loyalty, devotion and the holy fear,” Lamba says, adding that his uncle has had the same caller tune of ‘Mahamrityunjay mantra’ for 11 years. “He fears that if he changes it, something bad will happen,” Lamba says. It’s the same with Hindutva pop music.

Lamba is ambivalent of the politics of the music. “It’s not about what you like. It’s about what they like,” he says, drawing a parallel with the popularity of Honey Singh and Badshah among politically aware listeners. “Hindutva pop works,” he adds.

However, fame isn’t without pitfalls.

Girdhari Sharma, 25, has been trying his luck to become a Bollywood playback singer for the last three years. But with little success, barring a few YouTube videos and invitations to poorly attended shows, he is convinced that he has found his calling. “It’s the latest craze,” he says, as he scrolls through his YouTube channel to show off his videos.

His latest music video and the first in the burgeoning genre, has landed him in trouble. The video begins with shots of cows, and then proceeds to show some men pretending to beat the cows and in turn, injuring them. The shots that show injury marks on the cow have not gone down well with right-wing leaders. Sharma says that there is even a formal complaint against him. “The person who put together the photos from Google is responsible for this,” he says. The lyrics, that he claims to have written, translates to, “Cows are being killed, you should be ashamed… you call yourself a Hindu, do the job of a Hindu…” The video is still on YouTube and has over a 1,000 views since it was published two weeks ago.

Meanwhile, Laxmi Dubey says she's now accustomed to threats of being kidnapped and sent to Pakistan. “I get threats all the time,” she says, adding these include death threats. A year ago when she was performing at a local politician’s show in Bihar, she claims, there was a small blast but no one was injured. There were no reports to verify this incident.

Girdhari, Dubey and Singh are all a part of this now full-fledged industry. Some of them have already earned the ‘celebrity’ status, others are looking to ride the wave.

While Sharma is hoping to get back on track with changed visuals for his video, Dubey is soon to start a month-long show in Uttar Pradesh. “Yogi Adityanath has personally invited me to perform,” she says.

Produced by — Sheikh Saaliq
Illustration — Mir Suhail
More News18 Immersives
Mother, They Are Not Counting The Smallest Coffins
#WhoCleansYourShit — A day with a manual scavenge
River Ganga, Between Faith and Filth