In Search of the Inked

Traditional tattoos and symbols have lost their proud presence in the Naga society. The art form was almost on the verge of extinction. Then came a saviour. A man who has made it his life's mission to map the tattoos adorned by the Naga tribes. 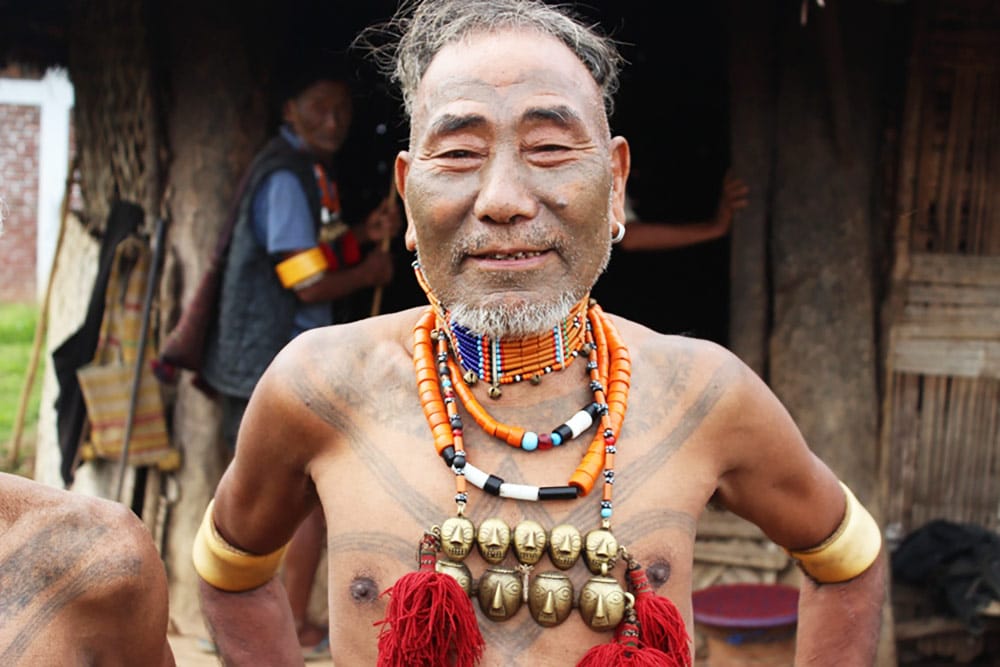 The Last of the Legends THIS KONYAK warrior is wearing his valour on his body. The nine brass heads define the number of heads he had hunted down and the tattoo on his body is a rare art, reserved for the bravest of the brave.

Konyaks are known to be one of the most traditional of Naga tribes. They were the last of the tribes to convert to Christianity, this only after the Church allowed them to continue with some of their traditional practices. The practices included not burying the heads which were hunted and stored by the tribe.

Amongst the tribes in the Naga Hills, 'head' was highly revered. It was believed that the head is where the soul resides. It is the focal point of a man's energy, spirit and life. Thus when the brave warriors brought back the heads of the enemies, it meant they were bringing prosperity and fertility to their tribe. Thus began the cult of headhunting, which dominated much of the narrative of the Naga tribes, till it was banned in the 1940s. Though some records seem to suggest, a few instances of headhunting was seen as late as the late 1960s or even after that.

The headhunters were decorated leaders of the tribe. They had special tattoos, often done by the queen herself, covering the entire upper body and the face. These tattoos were seen as medals of their valour, symbol of manhood. Old timers recount how men without tattoos often went without brides.

Tattoos were not just reserved for the headhunters. Each had a different meaning, signifier of the tribe. Each tribe had its own distinguishing mark. These helped them to identify their own, especially when confronted with a headless body.

There were tattoos for women too, some signified marriage, some child birth, rites of passages in the present life and into the next one too.

In areas around Chandel (Naga dominated hill area in Manipur which shares its border with Myanmar), some tattoos of medicinal significance were also found.

Impact of Christianity and Modern Life

Then came Christianity and the modern way of life. Old traditions were frowned upon and soon almost forgotten. As the tribes began imbibing modern ways of life, education and a stable life, these traditional tattoos and symbols have lost their proud presence in the society. No more are the youth adorned with the mark of their tribe, nor did the village belle, check out the tattoos before the biceps. The art form was almost on the verge of extinction.

Since the last evidence of headhunting was found in the late 1960s and early 1970s most of the headhunters in the tribes are octogenarians. The body art which they proudly display are often lost with them. This man embodies the last of those brilliant necklace tattoos. (See image below)

Then came a saviour. A man who has made it his life's mission to map the tattoos adorned by the Naga tribes.

Moranngam Khaling, popularly known as Mo Naga, was one of the three Indians to have made it to a list of 100 notable tattoo artists from around the globe. Published by Yale University Press in 2015, 'The World Atlas of Tattoo' by Anna Felicity Friedman tried documenting the revival of indigenous tattoos.

A 31-year-old graduate from National Institute of Fashion Technology (NIFT), Hyderabad, he took to tattoos almost by accident. Mo says "A friend of his, witnessed a tattoo session at another friend's house. It was his idea to explore this art form". Since he was in an experimental phase of life, he agreed to the idea of buying an amateur machine by investing his pocket money. To his surprise even before he returned to his room with the machine, he had clients waiting.

If I can map the entire Naga tattoo patterns in my lifetime, then I would be lucky.

Mo's illustrations were famous; his friends now wanted him to take the next step. He continued making tattoos throughout his undergrad days. Once he passed out of NIFT, he moved to Delhi. Ambitious to a fault, he wanted to map all the indigenous tattoo art that exists in India. Close to a decade later, he is wiser, Mo says "If I can map the entire Naga tattoo patterns in my lifetime, then I would be lucky".

When he began reading about tattoos as an art form, the riches back home struck him. But he also realised that no Indian before him had done any research on this. Mo says ironically it is a Frenchman, Stephane Guilermo, a tattoo researcher, who knows the most about the various Indian tattoo cultures. The indigenous tattoos excited him. He wanted to develop modern patterns emerging out of the traditional designs, be it from Madhya Pradesh or Odisha or Chhattisgarh and Jharkhand. But he realised that it was the craft back home which needed his immediate attention.

While in the various tribal and non-tribal societies across the country tattoos are still being made, the Naga tattoos have stopped. If the art isn't preserved immediately, it would be lost forever. This made him rush to Nagaland for his field trips and it seems to be paying off. He was able to meet and document the great warrior Laikimong, an erstwhile headhunter of Yimchunger tribe. This octogenarian was a legendary fighter of his tribe, with over 20 heads to his credit. His status ensured he had one of the most unique tattoos. Mo says he was lucky to document him.

I would never do a headhunters' tattoo on any one because that would be an insult.

When he went to Laikimong's village three years later, old man was gone. But thanks to Mo, the story of his valour and the headhunter's tattoo would continue to live after him. Not just him, four other headhunters documented by him have also passed away.

He tells me about the Apatani tribe of Arunachal Pradesh. Apatani women have a distinctive nose plugs and face tattoos. The popular belief is Apatani women are very beautiful and these tattoos were done to make them look ugly, so that raiders from the neighbouring areas would stop stealing them. But after spending a lot time with the tribe, he discovered this was a misnomer. Like many other societies across the world, Apatani tattoos tell stories of their closeness to nature. The tattoos not only mark their identities but are deeply rooted to their beliefs and rituals. The folklore of ugliness appears to be the creation of a travelling westerner who found this art ugly.

Mo Naga was soon to realise that it is not possible for one man to document this vast reservoir of knowledge. That's when he started Headhunters Ink, a concept which goes beyond the tattoo studio and is a school in itself. The idea is to educate more people about the indigenous tattoos, form a brotherhood, so that somewhere down the line this research can be streamlined. He travels between Dimapur, Guwahati, and Delhi and has clients in all these places.

Research is expensive. When Mo and his team visit a tribe, he throws a feast for them. It is essential to win their trust and hearts, if he has to get the stories of the bygone era from them. It often takes time to gain their confidence, but once he does, the result is highly rewarding.

Mo claims whatever he earns is spent on these study trips. Till date he has not taken any government or institutional aid. But he is now open to grants. He has a team ready at the Headhunters and he hopes that the work he is doing would get him some sort of institutional assistance.

Crowdsourcing: The Way Ahead

The idea at Headhunters Ink is to put all the information online for everybody to access. Mo wants to create a society of tattoo researchers who would all key-in their findings in this crowdsourced database. This would help everybody to gain from the knowledge preserved from the dying arts. But for this to happen, a lot of work needs to be done. At 31, Mo today is at his productive best, but he would have to bring in a semblance of an organisation to aid him in this quest. Today it still remains an individual's journey in to the past; he will have to elevate that to a cult.

In the brotherhood of the inked world, Mo is a famous man. He is known for tattoos which are inspired from the Naga folklore. As he goes ahead with his conservation agenda, he tells me "I cannot do any random tattoo. I have to be responsible tattoo. I try to do only my style of tattoos but at the end of the day this is a deeply personal art today". From being the mark of the community to being the supreme individual expression, tattoos have come a long way.

What He Would Never Do?

"I would never do a headhunters' tattoo on any one because that would be an insult. A headhunter takes a lot of pride in his tattoo; he got it for his valour, as a mark of respect for his bravery. If I make one today, I would be making a mockery of his greatness", Mo says.