Gang-raped by five upper-caste men, her cry for justice stirred up India’s collective conscience long before the #MeToo movement swept the world. Twenty-six years on, where is Bhanwari Devi? News18 met with the woman whose long struggle laid the foundation for India’s workplace safety laws… but who still awaits justice

hanwari Devi was working the fields with her husband when she was sexually assaulted by five men. Her husband was beaten with sticks. When she tried to help, Bhanwari was thrashed and nasty abuses were hurled at her. She begged for mercy. But she was shown none. Two of the attackers pinned her black-and-blue husband to the ground; the other three took turns to rape her.

Bhanwari Devi has recounted this sequence of events so many times — in courts, in front of the police, the press, on public forums — that her story now shockingly symbolises what happens when India’s deeply entrenched patriarchal mores go horribly wrong.

I had called her before travelling to her village to know if she would be willing to talk. She didn’t even ask what. She just knew it. “Come whenever you want to,” she said.

Her brown eyes light up at the sight of strangers at her door. She is expecting us. She is at the door bare feet, carelessly worn silver toe-rings and anklet kada hang loosely about her feet. “I had to go to Jaipur today for an eye checkup. But I stayed over for you,” she tells me with a warm smile as she leads us in.

Bhanwari, in her mid-fifties, is a petite woman. She is dressed in a ghagra-choli — A common attire women wear in her part of India. A big round maroon bindi on her forehead and red bangles on her thin arms describe her marital status. Unlike most women in the area, she doesn’t cover her face, but her bright orange dupatta barely slips from her head.

She smiles generously and enquires about my wellbeing with the air of a matriarch. I am in awe already. I look intently at her, trying to find traces of self-pity hidden among the webwork of lines age has left on her face. There’s none. She remains self-assured, her confidence never wavering. For the world she may be a rape victim; for herself she is not.

She takes us into a small room with a single bed and a charpoy lying side by side. A pile of jute sacks is stacked in a corner. The room is adorned with posters of Hindu Gods. A calendar hangs on a side wall. These are the only decorative elements in the room.

As we sit chatting about my journey from Delhi to Bhateri, I am conscious about raising the topic.

“What can I tell you that people don’t know already?” she says, starting the conversation I am struggling to begin.

Her husband Mohan Lal Prajapat, the sole witness to the crime, walks in with tea. He greets us with a smile. Like Bhanwari, he too makes no pretence of ignorance. Pouring tea into disposable cups, he starts narrating what I already know through my research:

The attackers, too, were from Bhateri. They were Gurjars, placed higher in the caste hierarchy than Kumhars (potters) to which Bhanwari belonged. They were enraged at her efforts to stop the marriage of a nine-month-old girl in their family. To teach her a vicious lesson, they gangraped her.

“We had no idea it would come to this,” says Mohan Lal. The attack on fields didn’t come out of the blue. Much before the sexual assault, the perpetrators had begun lobbying with other upper-caste members in the village to isolate Bhanwari and her husband. The two were threatened many times since the day Bhanwari informed the police about the wedding.

“They felt humiliated that the wedding was interrupted by a woman. They wanted to humiliate me in return,” she says.

Lying ravaged and almost annihilated in the fields, a disconsolate Bhanwari took an unlikely and courageous decision. She decided against silence; she decided to report rape.

In 1992, when the rape happened, Bhanwari had no clue that her wait for closure would be endless. It’s 2018 and she still awaits justice.

I want to know what she thought about the social stigma that would come with the crime. “What wrong did I do? It’s their shame, not mine,” Bhanwari says matter-of-factly, without a trace of regret about her decision.

It was the summer of 1992. The events of that summer changed her life forever. What unfolded after 1992 changed the lives of millions of working Indian women. 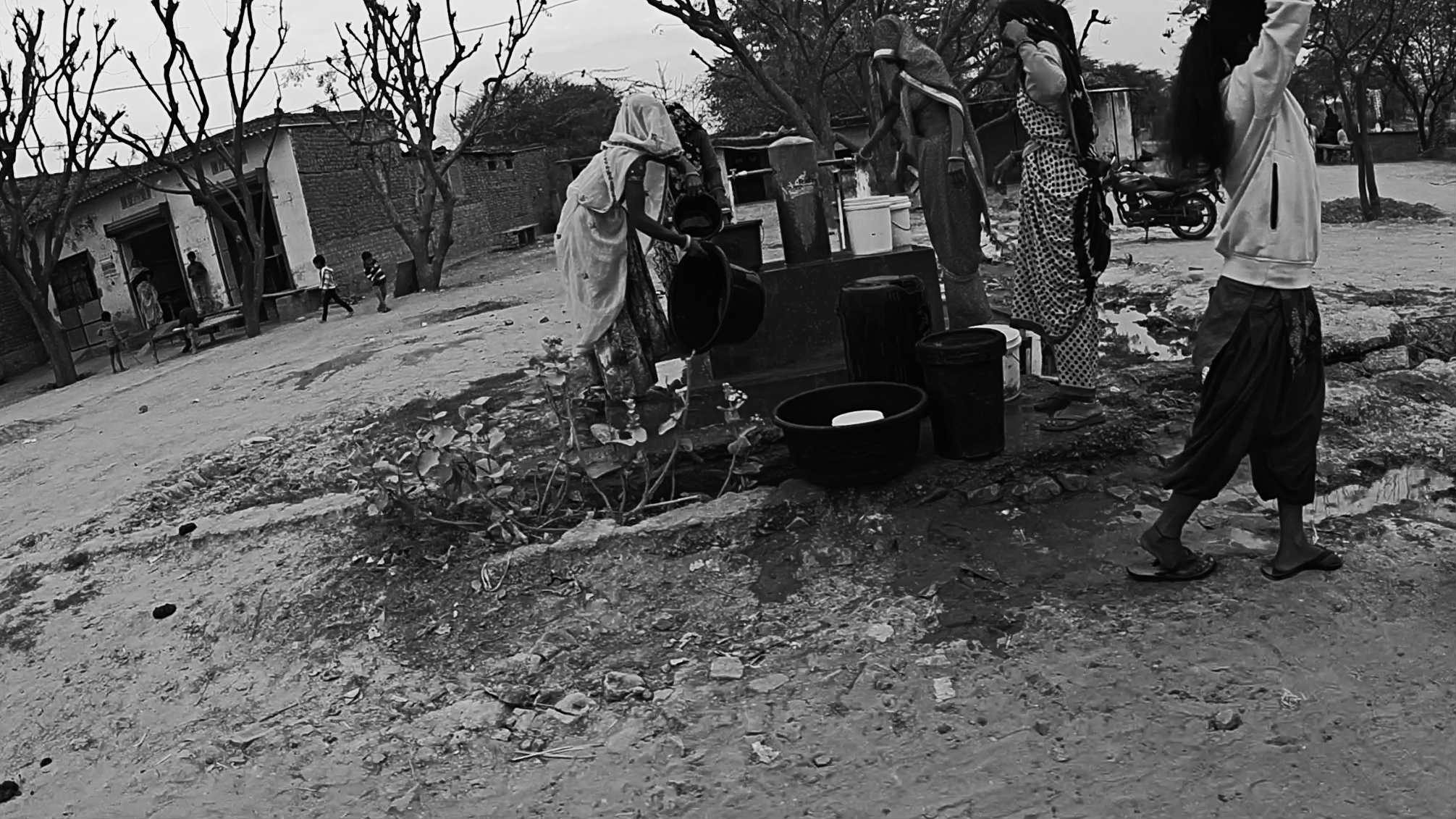 Women fetch water from a government-installed hand pump in Bhateri. In this part of Rajasthan, women are required to keep their head and face covered all the time

Looking rape in the eye

In the ’90s, India was much more biased against women.

Sexual harassment was a taboo topic. No one talked about it. A low-caste poor woman having the guts to file a rape complaint against rich high-caste men wasn’t a common happening.

When Bhanwari Devi tried to lodge a formal complaint, she was humiliated by the police. Her FIR could be filed many days later under pressure from women groups in Jaipur.

Three years later, all the accused were acquitted by a Jaipur court. The judgement was challenged in the Rajasthan High Court. A quarter century and many topsy-turvy developments later, a final verdict is still awaited.

“Why hasn’t the government supported me? I was doing their job,” she asks. Over the years she has asked this question repeatedly. Her searing quest to seek justice for herself, of course, set off the process that made workplace harassment an irrevocable part of the mainstream discourse.

At the time of the dreadful incident, she was working as a ‘saathin’, an employee of the Women’s Development Project run by the Rajasthan government. Convincing villagers against child marriage was a task assigned to her by the District Women’s Development Agency. The saathins were required to inform the police in case anyone forcibly tried to marry off children. That’s what Bhanwari did.

Moved by her plight, some women groups together filed a PIL in the Supreme Court. The result: in 1997, the Supreme Court laid down formal guidelines for dealing with sexual harassment at the workplace. These came to be known as the Vishakha Guidelines.

Later, it would form the foundation for India’s law on prevention of sexual harassment at workplace.

But this milestone development had no bearing on Bhanwari’s case, which was weakened by shoddy investigation and delayed medical checkups. Two of the accused have already died.

This is just one grave side of her struggle. On the other side is her life and family that slowly fell apart. 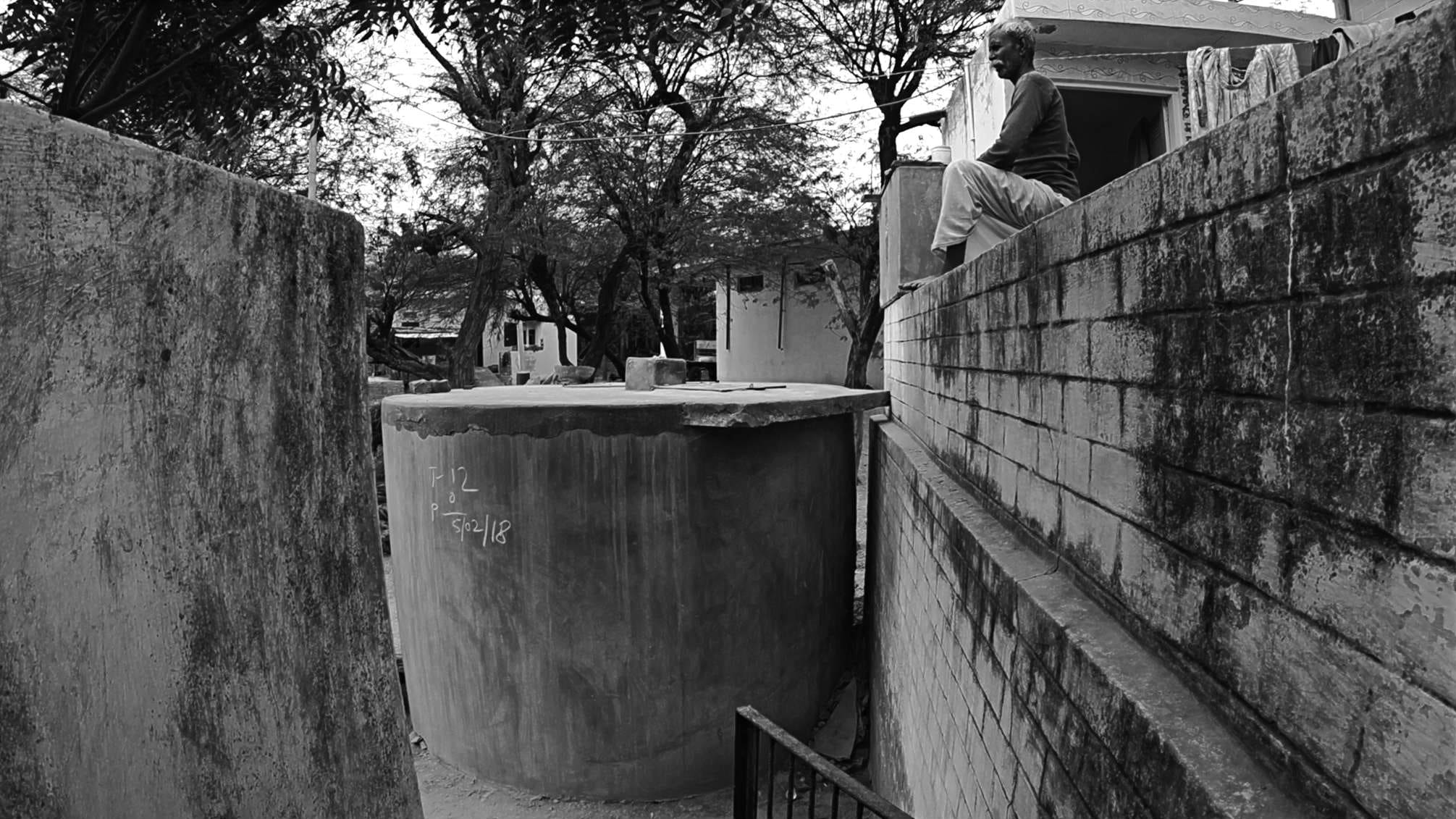 Women activists from Jaipur came together to get this water tank installed near Devi’s house. Her neighbours refused to let her use the mohalla hand pump for water

What it takes to report rape

I ask Bhanwari about her age. She thinks hard before answering, “Pachaas aur paanch (fifty-five)”. She doesn’t seem to remember.

I enquire about her girlhood. The only childhood memory she has of herself is that of a child bride. How young was she when she got married? “Very young. I don’t remember.”

Bhanwari came to Bhateri after her marriage. All she recalls is that she wasn’t even eight when she got married. Her husband, too, might have been around 10.

“Our family has been here for four generations,” she says. Four generations in a village means deep, unbreakable bonds between families. But rape can change everything, as she came to know slowly and sordidly.

She still lives in the same village as her rapists; their house just a few metres from hers. Court-administered freedom for culprits made life more difficult and hellish for her. Threats and pressure to withdraw the case became a regular part of her life.

Pressured by the influential perpetrators, the villagers ostracised her. Not only the stigma of rape hung around her like a badge of shame, she was also looked down upon for talking about the awful crime. The village bigwigs openly took sides with the alleged rapists; Bhanwari was branded a liar.

People refused to buy clay vessels from her family. The family was denied all services in the village. No grain or milk reached them. They weren’t allowed to fetch water from the village as well. Bhanwari’s kids were bullied in school. They were shunned from all events and festivities.

Despite her blackballing, Bhanwari doggedly pursued the case. She also continued her job as a saathin.

The acquittal of the accused in 1995 made things worse for her. Pressure mounted. Her family asked her to make peace with the assaulters. When she refused, they severed ties with her.

In a village thriving with life and people, Bhanwari Devi and her kids were pushed into solitariness.

Has the villagers’ attitude changed now? Bhanwari says it has. But I learn from women’s rights activist Nisha Sidhu in Jaipur that attitudes towards her have changed just a tad. People still maintain their distance. Recently, in fact, she was refused water from the village hand pump. And she still goes to a nearby village to grind her grain.

“Bhanwari smiles all the time, but one cannot begin to imagine what she has faced in that village,” Sidhu says.

The girl whose marriage turned Bhanwari’s life on its head stays in the same village. She is a mother now. I ask Bhanwari if she has ever felt the urge to speak to the girl. She smiles and shakes her head in denial. She has never come face-to-face with that girl. “I don’t have any bitterness against that kid,” she says. Girls walking home after school. Enrolment of girls at primary level has increased in the area, but not many people support their higher education

As in the rest of the country, active government interventions have brought a positive attitudinal change about girls in this area. In Bhateri, most of the girls now go to schools. Few families have even sent their girls to cities for higher studies. Girls from the family of Bhanwari’s alleged rapists, too, have benefitted from this change.

Child marriage in the region has come down drastically, but a deep dive into the village society shows that women are still stuck in their traditional roles.

I ask her if she has ever thought about moving to some other place to start afresh.

“Why should I leave my house for someone else’s crime? It’s the criminals who should run away. I will not go anywhere,” she declares empathically.

Her parting sentence sums up the galvanic purpose of her fight: “The only option I have is to fight. I may not get justice, but others will.”