Police personnel and people outside the street leading to the house where 11 members of a family were found hanging in Burari area. (PTI Photo/Shahbaz Khan)

The bodies were blind-folded and gagged, and were found hanging from the ceiling, police sources.

New Delhi: Eleven members of a family, including seven women and two children under 15 years, were found dead under mysterious circumstances in a house in north Delhi’s Burari area on Sunday morning. According to investigators, three of the deceased could have killed the others under the influence of spiritual practices.

Ten of the bodies were blind-folded and gagged and were found hanging from the ceiling of the house opposite Guru Govind Singh Hospital.

Police have recovered handwritten notes saying "the human body is temporary and one can overcome fear by covering their eyes and mouth".

"We have found handwritten notes detailing how hands and legs are to be tied and are quite similar to the manner in which the bodies of 10 persons were found. They are exhaustive notes and we are studying them," said Joint Commissioner of Police (Crime) Alok Kumar.

"The notes say if a group of 11 people follow these rituals, all problems would ease out and they would attain salvation. Some notes have dates on which they were written while others don't. All the notes talk about reaching the end and gaining peace," one of the investigators said.

Police sources added, "Probe has revealed that three of the family members had first decided to commit suicide who then decided to kill the entire family. They bought sedatives and mixed it in the dinner the previous night and served it to the family."

A police officer said they are probing to find "if the family indulged in occult practices" or they followed "any godman".

The three tied the hands of the others so that no one could raise an alarm or get away. Police suspect, first they hanged everyone else according to the instructions of a tantrik and later killed themselves.

The trio also tried to write a suicide note, police said that they have found some handwritten notes, which show the influence of some spiritual practices. The three however cancelled the plan to leave a suicide note.

Police have also found the family’s pet dog that was left on the roof and the investigators are now trying to find fingerprint traces from its leash to deduce who killed who and also used the sedatives.

The investigators said, “The man who took the dog from ground floor to the terrace must have left fingerprints on its leash. We will be able to find out who was one of three culprits.”

Police have also seized the mobile phones of the deceased persons for further investigations and they are collecting call records to trace the sequence of events and connect the dots. 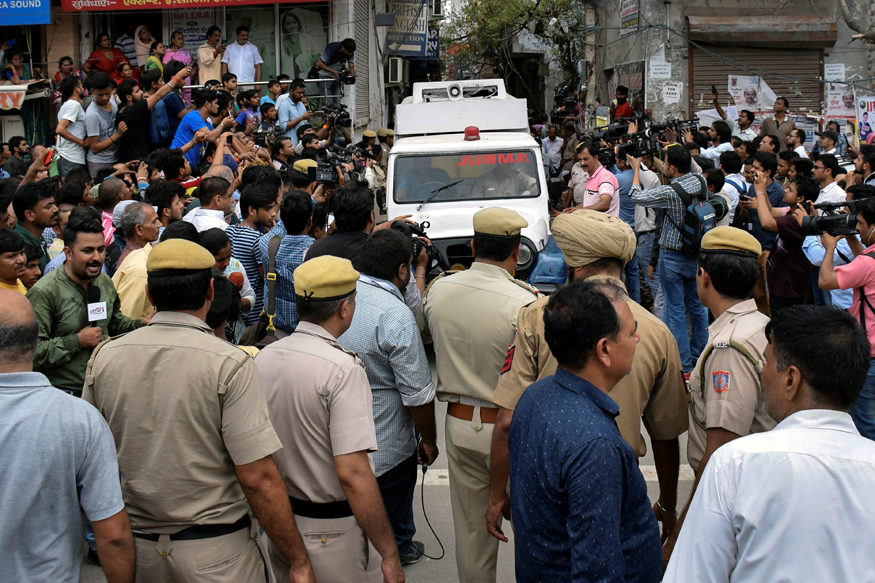 An ambulance carries bodies of the 11 members of a family who were found hanging from an iron grill in a house in Burari on Sunday. (PTI Photo)

Police have registered a murder case in the incident thus ruling out suicide by all of the 11 dead.

"The case has been transferred to the crime branch and we have inspected the site. Handwritten letters that have been recovered from the house, which suggest a spiritual angle to the deaths. Further investigation will reveal more," said Alok Kumar.

First the dinner of all the deceased was laced with sedatives following which they fell unconscious on Saturday night. The person who planned the murders then hung the family members one by one during which one woman woke up. Her throat was slit to stop her from alerting the neighbours or even escaping.

Police teams were rushed to the spot and investigation is underway.

Now, investigators are waiting for forensic and autopsy reports to get further details on the shocking incident. Police teams at the cite came across several red stools that were lying overturned in the rooms and balcony.

A source said that the family hailed from Chittorgarh and had arrived in Delhi 22 years ago, following which they set up a grocery store and initiated a plywood business. Police got in touch with the family's relatives in Rajasthan who later reached the residence.

The deceased were identified as Narayan Bhatia (75), her daughter Partibha (60), Partibha’s daughter Priyanka (30), Narayan’s older son Bhupi Bhatia (46), his wife Savita (42), their children Nitu (24), Meenu (22) and Dhiru (12), Narayan’s younger son Lalit Bhatia (42) and his wife Tina (38) and their son Shivam (15). Police sources said the old woman’s body was found on the floor and it was suspected that she was strangulated to death.

While the family lived on the first floor of the building, the ground floor housed their shop. According to a source, the house was undergoing renovation. Recently, the family had sold their store and a hefty amount of cash was kept in the house.

The family closed the shutters of their shop at 11:45 pm on Saturday and upstairs. On Sunday morning, one of their neighbours came to buy milk at the shop and found it closed. On finding the house unlocked, he went upstairs and found the bodies. Police presence at the street leading to the crime scene in Delhi's Burari on Sunday morning. (Pradip Pradhan/News18)

"He found the bodies hanging from a net used for ventilation. He alerted other neighbours and informed us,” a policeman said.

Speaking to reporters, Kejriwal said, “I spoke to the neighbours. They said it was a very loving and social family.... We have to wait for the police to complete their investigation.”