This is the second case of a suicide linked to the Blue Whale challenge in the country. In the last 24 hours, two more boys who were reportedly addicted to the game have tried to commit suicide, but were saved in the nick of time.

Kolkata: A 14-year-old boy said to be addicted to the deadly Blue Whale ‘Game’ committed suicide by hanging himself at his house in Keshpur in Bengal’s West Midnapore district on Saturday morning.

Ankan De, who was in Class 10, was last seen playing the online challenge using his father’s desktop at his office in Anandapur Town, police said. His father, Gopinath, runs a cable TV business.

Police have seized the computer and sent it for a forensic examination to ascertain the links through which Ankan reportedly got addicted to the game. “Initial evidence suggests it the suicide is linked to the Blue Whale Challenge. We are investigating the matter,” a senior police officer said.

A student of Anandapur High School, Ankan (14) was very fond of gadgets and online computer games, his family said. On Saturday, he went to take a bath, but when he didn’t open the door for more than an hour, his family grew suspicious. They finally broke open the door and found him hanging. He was wrapped partially in polythene sheets.

The incident has sent shockwaves in the locality. This is the second case of a suicide linked to the Blue Whale challenge in the country. Earlier, a 14-year-old from Mumbai, Manpreet Sahas, had ended his life by jumping off a building on Thursday. Manpreet, before jumping from the multi-storied building in Mumbai, took a photograph with a captioned which read, “The only thing you’d be left with is a picture of me.”

In the last 24 hours, two more boys who were reportedly addicted to the game have tried to commit suicide, but were saved in the nick of time.

The deadly game that overpowers kids and asks them to commit suicide has enjoyed a surge of popularity recently and has become a talking point in the nation. Kerala Chief Minister Pinarayi Vijayan on Saturday wrote to Prime Minister Narendra Modi and asked him to take action to stop the spread of the game.

Recently, senior CPI-M legislator Raju Abraham had told the Kerala Assembly that in Kerala alone there have been 2,000 downloads of the 'Blue Whale' game that is said to have led to over 4,000 suicides across the world. 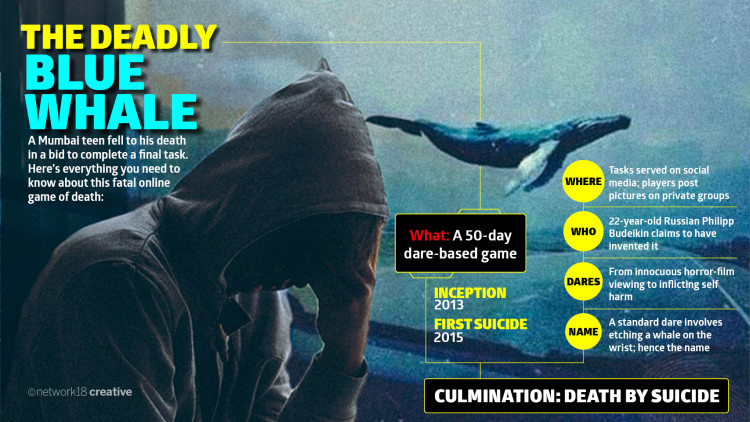 Reports of the growing popularity of the challenge has led to police and administration in several states issuing advisories to students, teachers and parents. The issue has also been taken up in the Parliament, with legislators asking the government what steps have been taken to curb the challenge.

On Thursday night, a 14-year-old boy who allegedly left his home in Maharashtra’s Solapur to complete a ‘Blue Whale’ task was rescued by the police from a Pune-bound bus.

The teenager’s parents had told the police that he had left a note saying that he is leaving home and they should not try to find him. The parents also said that the boy had not slept for the past 4-5 days and they had seen 'Blue Whale' suicide game as a search result on his mobile internet browser.

On Thursday, a Class VII boy in Indore was saved in the nick of time as he tried to jump off the third floor of his school building, allegedly in order to complete the final stage of the dreaded Blue Whale Game.

In this shadowy underground challenge-based game, teens are given tasks to complete that include things ranging from something mundane to inflicting self-harm. There are 50 levels, with the extreme nature of the tasks growing by each level. Game ‘administrators’ elicit the personal information of the kids to ensure they do not back out.

The tasks in the game include climbing a crane, carving a specific phrase on the person’s own hand or arm, doing secret tasks, poking a needle in the arm or leg, standing on a bridge and roof, listening to music, and watching videos sent to the challengers by the administrator. The final level is committing suicide.

The game is said to have originated in Russia. It was created by 22-year-old Philipp Budeikin, who is currently spending three years in a Siberian jail. The game has reportedly claimed the lives of more than 130 kids around the world.