FILE PHOTO: A doctor uses an infrared thermometer to measure the temperature of a child at his mobile health clinic, after his clinic and its adjoining areas were declared a micro-containment zone, after authorities eased lockdown restrictions that were imposed to slow the spread of COVID-19. (Photo: Reuters)

What's more alarming is that these districts account for nearly three-fourths, or 76.75% of the total coronavirus fatalities in the country.

Out of these, seven districts are in Maharashtra, three in Tamil Nadu, two each in Gujarat and Haryana. Delhi is taken as one whole district while the states of Telangana, West Bengal, Madhya Pradesh, Karnataka and Rajasthan contain one district each.

What's more alarming is that these districts account for nearly three-fourths, or 76.75% of the total coronavirus fatalities in the country. 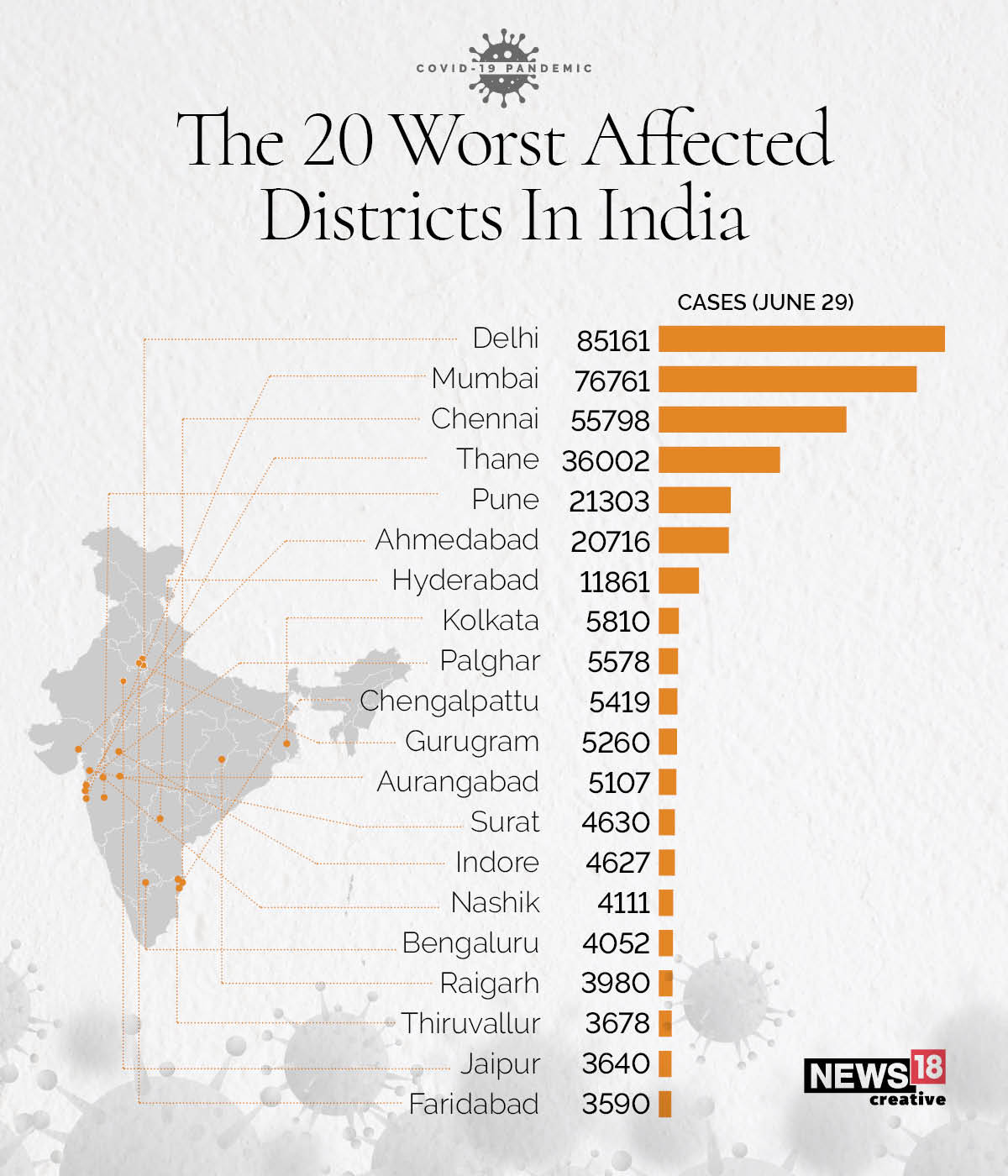 Bengaluru (including rural) has seen a sudden surge in Covid-19, after being lauded for its relative success in curbing the disease; and was called a "model city".

From a mere 763 cases on June 15, the number has multiplied by almost 5.5 times to 4,160 on June 29. No other city or district has seen such an alarming rise in the number of cases in the past 2 weeks.

The easing of the lockdown post June 1 led to a larger movement of people within the city and state. Curbs were relaxed and large gatherings were reported from restaurants and other public places. As the cases rose, the authorities were caught off-guard; not anticipating such an increase in cases. With 95 fatalities, the city currently reports a Mortality Rate of 2.28%.

Bengaluru witnessed its highest single-day spike on June 28, when it recorded 783 cases. On Monday, it again saw a high of 738 cases. In the last ten days, the city has reported almost 4 times the number of cases witnessed in the previous three-and-a-half months. A 15-day lockdown may be imposed in Hyderabad after the city saw a sharp increase in cases and a significant rise in its Covid-19 Positivity Rate. Hyderabad’s cases have risen by more than three times in the last fortnight even as the Positivity Rate soared at 32.1% (second-worst after Mumbai’s 33%) on June 23 – suggesting that the city is testing less even as the number of cases continue to rise. The city alone accounts for 77% of the total number of cases in Telangana.

However, there has been a significant drop in the rate of growth of cases in Gurugram which had seen the worst spike amongst all districts in the country between June 1 and 16 with cases increasing by a whopping 376%. This percentage has dropped drastically and come down to 51% in the two-week period between June 15 to 29.

While Mumbai has reported a dip in the growth of cases, concerns remain over the number of tests being conducted in the city. It reported a high Weekly Positivity Rate of 26% on June 23. The Mortality Rate has also risen to 5.72%. Equally concerning for Maharashtra is the rise of cases in its neighbouring districts.

Palghar, Raigarh and Nashik all have seen a doubling of cases in this period. Disturbingly, Nashik and Aurangabad have a high Mortality Rate of 5.11% and 4.86%, which places them among the worst-hit five districts on this count.

But the rate of growth of cases has considerably gone down in Chennai and neighbouring Chengalpattu – which have been in lockdown since June 19. In the 14 days from June 15 to 29, Chennai saw its cases rise by 1.69 times compared to 2.3 times in the 16 days from June 1 to June 16.

Chengalpattu saw its infections surge 2.8 times in the first 16 days of June. That multiple has come down to 1.7 over the last fortnight. This suggests that the lockdown has, so far, been effective in containing the spread of the virus in these two districts.

Although Delhi has seen its cases double in this period, early trends have emerged that indicate a drop in the number of new infections coupled with a fall in the Positivity and Mortality Rates. 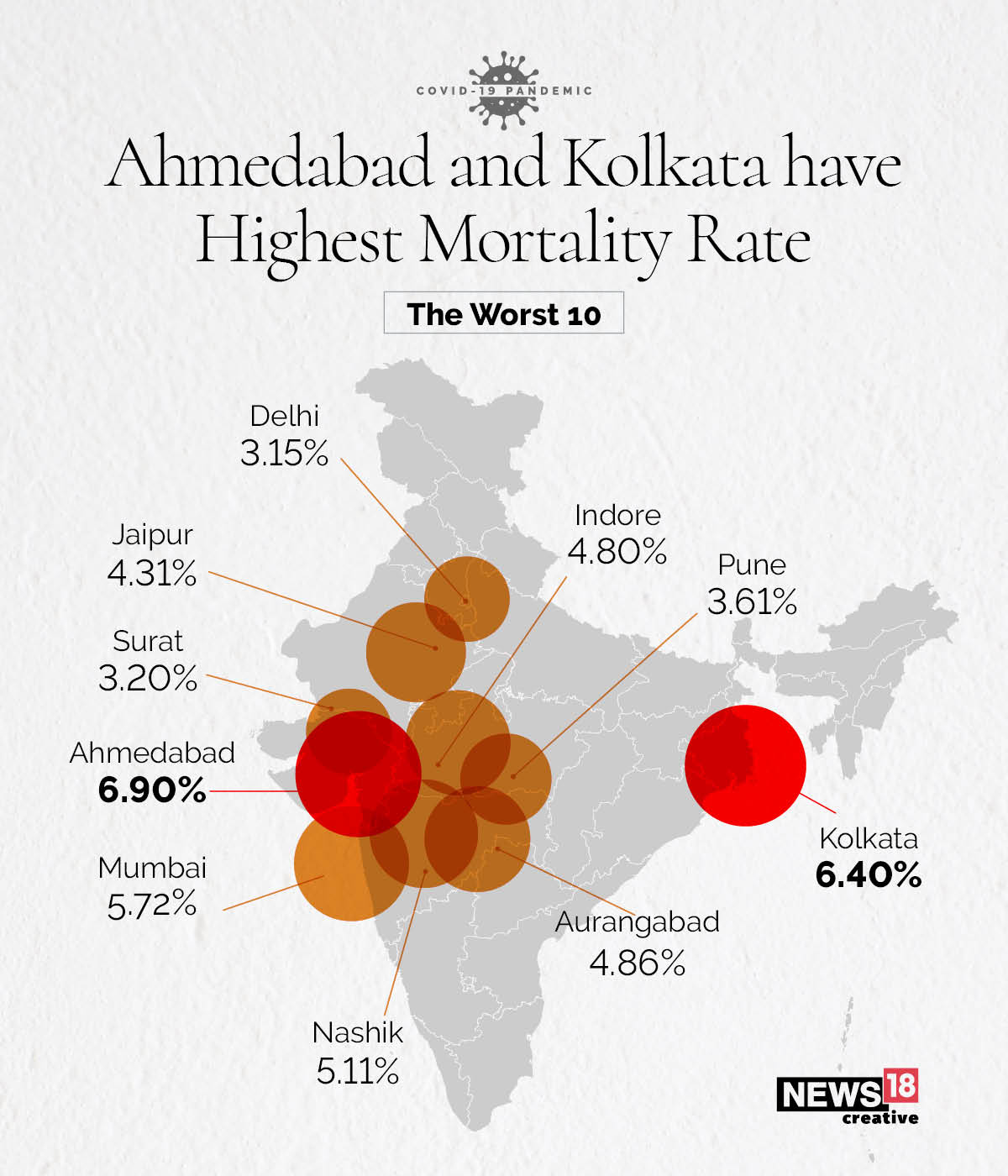 Kolkata and Ahmedabad have seen a low increase in the number of cases but continue to report a high number of deaths. They have the worst Mortality Rate among the 20 worst-hit districts analysed in the country.

Outside the 20 high case-load districts, Madurai and Vellore districts of Tamil Nadu have seen a huge spike in cases in the last fortnight. From a respective 459 and 463 cases on June 15, they had reached a total of 2,319 and 2,137 cases on June 29.

South Goa has also more than doubled its cases and breached the 1,000 mark. Other prominent districts which have seen their cases double in this period include the two worst affected districts of Uttar Pradesh - Ghaziabad and Gautam Buddha Nagar (which includes Noida and Greater Noida).

While the government may allocate resources and efforts to contain the pandemic in the 20 worst affected districts, it also has to keep an eye for new hotspots across the length and breadth of the country.