24 Bonded Laborers Rescued From Hassan, District Administration Yet to Register a Case

In this case, the 24 labourers were held in bondage in a brick kiln in Sakleshpur for six months. They were all trafficked from Krishnagiri in Tamil Nadu by two traffickers and the owner of the brick kiln who picked them up from their homes.

Bengaluru: Another case of bonded labour has come to light from Hassan district in Karnataka, where 24 labourers, including 10 children, were rescued by an NGO on Saturday.

This incident comes in the backdrop of a similar case that was unearthed when 52 tribals were rescued from a ginger farm in Savankamahalli village of Hassan district in mid-December. These tribals were abused and trapped in a small shed without being paid for months together.

In this case, the 24 labourers were held in bondage in a brick kiln in Sakleshpur for six months. They were all trafficked from Krishnagiri in Tamil Nadu by two traffickers and the owner of the brick kiln who picked them up from their homes. At the kiln, the families weren't given any accommodation but were only provided with tarpaulin sheets, from which they made their tents. International Justice Mission (IJM), the NGO that helped rescue these labourers, said that the workers were lured by the owner who promised the labourers Rs 500 for the men and Rs 400 for the women as wages per day.

However, these promises turned out to be false and the labourers were paid a mere Rs 75 per day which is nowhere close to the Rs 460 per day prescribed by the Minimum Wage Act. Those rescued belonged to five families; including 10 small children, four teenagers and 10 adults. Even the children who were as young as four were forced to work in the kiln from 6am to 7pm. 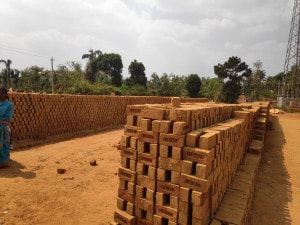 M Prathima, Associate Director at IJM, said that "the Sakeleshpur police raided the kiln on Friday, however the owner got tipped off and dropped the labourers at the Karnataka-Tamil Nadu border the night before. The labourers then approached the NGO, which in turn pushed the Tehsildhar to conduct a thorough inquiry into the case".

Nagraj, one of the rescued labourers speaking to News18 explained how the inhuman attitude of the owners had left his child badly injured after a dog bite. "The owner didn't give us any money to take him to the hospital, after repeated request we gathered some money and rushed to the nearest government hospital," said Nagraj.

The authorities have, however, not yet filed an FIR against the owner of the brick kiln nor has anyone been arrested yet.

Since the Tehsildar who conducted the spot inspection didn't find the labourers there, in his report to the assistant commissioner said that he didn’t think it qualified as a case of bonded labour. The authorities also claimed that since the labourers were given an advance amount their case couldn't be classified as bonded labour.

On Tuesday, the labourers approached the Karnataka State Human Rights Commission as the Hassan District has not given them any release certificate or declared them as bonded labourers thus making them ineligible for any financial or social rehabilitation.