Kashmiris and pro Khalistan Sikhs demonstrate during a march and rally to protest New Delhi's move to scrap special status of Jammu and Kashmir and bifurcate the region into two Union Territories. (Image: AP)

As the clashes progressed through the day, there were instances of stone-pelting and bottle-throwing, with Scotland Yard officers on duty seen tackling some of the protesters to restrain them.

London: Scotland Yard said it made four arrests as thousands of protesters converged outside the Indian High Commission in London for planned protests and counter-demonstrations to mark Independence Day on Thursday, resulting in an extremely tense face-off between different groups.

The anti-India protest, organised by Pakistani groups and Sikh and Kashmiri separatist outfits, was demarcated with metal barriers from a pro-India demonstration outside India House, during which placard-waving crowds disrupted the flow of traffic and chanted slogans.

As the clashes progressed through the day, there were instances of stone-pelting and bottle-throwing, with Scotland Yard officers on duty seen tackling some of the protesters to restrain them.

The protests, which according to the Metropolitan Police resulted in one injury, was described as largely peaceful involving a small number of incidents. 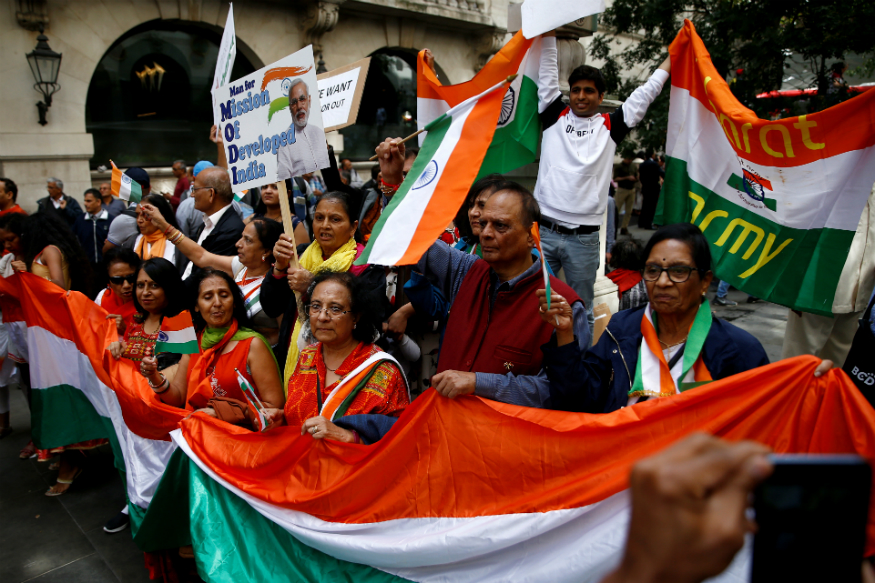 Pro-India demonstrators outside the Indian High Commission in London on August 15, 2019. (REUTERS/Henry Nicholls)

"The event was largely peaceful but officers did have to react and deal with a small number of incidents as they happened. In total there were four arrests for Section 4 of the Public Order Act, affray, obstruction of police and possession of an offensive weapon," the Metropolitan Police said in a statement.

"Public order trained officers were policing today's demonstration as part of a planned operation. One person was injured during the demonstrations," it said.

Earlier, the Met Police had confirmed that it had been aware of the protests and had therefore made appropriate policing arrangements, which included considerable number of officers on foot as well as officers mounted on horses.

While the anti-India protesters chanted slogans, the counter-protesters waved the Tricolour during the face off. The anti-India crowd included the pro-Khalistan Referendum 2020 group, a regular feature outside India House during Independence Day protests over the years.

However, the turnout this year was expected to be much larger in the wake of the Indian government's move to revoke the special status to Jammu and Kashmir.

Ghanashyam also greeted the Indian Cricket Association for the Physically Challenged team, which recently beat England to win the Physical Disability World Cricket Series 2019 at Worcester in the West Midlands region of England.