60% Drop in Terror incidents Since Scrapping of Article 370 in 2019 a Sign to Begin Legislative Process in J&K?

After the abrogation of Article 370 on August 5, 2019, Jammu and Kashmir has seen a significant drop in terror incidents, which may have paved the way for rebooting the legislative process in the region.

In 2018, when Jammu and Kashmir was a full state along with Ladakh, it saw 614 terror incidents. However, the number came down to 244 incidents in 2020, a drop of 60.26 per cent, as per data from the Ministry of Home Affairs. In 2021 so far only 43 terror incidents have been reported, according to terror incident tracker website South Asia Terrorism Portal (SATP). 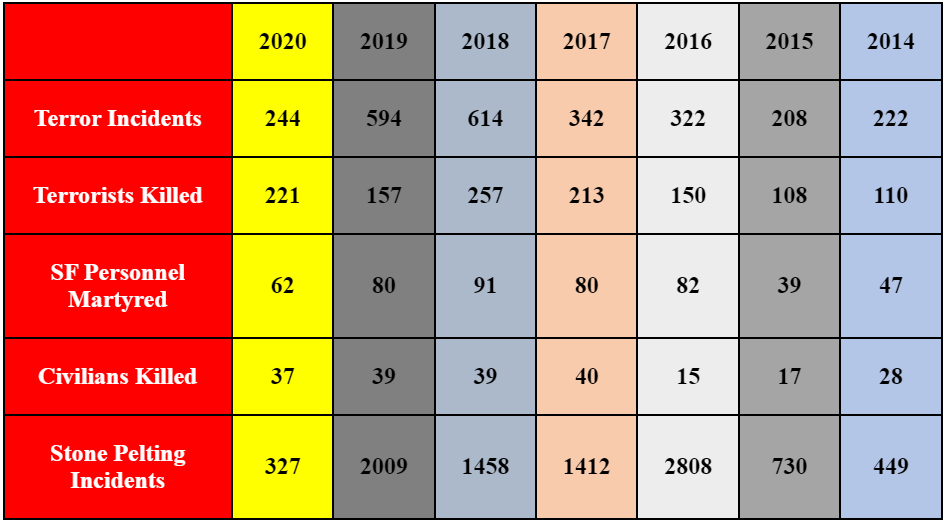 The table shows how the scale of terror activities in the Valley post and pre-abrogation of Article 370 has significantly come down, be it terror incidents or the number of terrorists or security forces personnel or civilians getting killed. The Incidents of stone-pelting by local youth have also dropped majorly.

As per Ministry of Home Affairs data, the Valley saw 65 terrorists infiltrating in 2014. That reduced to 36 in 2015 but then significantly increased to 119 in 2016, 136 in 2017, 143 in 2018 and 133 in 2019. But with strong anti-infiltration grid in place, 2020 saw infiltration bids reduced to lower than 100 with around 30 terrorists sneaking into India, and as per official figures, all infiltration bids in the last three months were successfully foiled.

Post the abrogation of Article 370, the Centre has adopted a policy of zero tolerance as far as terror activities are concerned. Security measures in the Valley have not only been strengthened, legal actions were also initiated against pro-Pakistan politicians from J&K who used to allegedly launder money to support terror activities in the Valley, including violent activities like stone pelting.

The Valley used to witness around 1,500 stone-pelting incidents a year that drastically came down to 327 incidents last year. If strengthening law and order machinery in the state that froze laundered money to help these unruly youth was one reason, the other was the initiation the grassroots democracy in the Valley by successfully holding Panchayat elections.

The Panchayat elections were fought on issues like women safety and empowerment, basic amenities like water and development issues showed. It showed the people of the region are ready to reject terrorism propagated by Pakistan and pro-Pakistan Valley leaders that was a clear departure from the previous elections.