The rescued bonded labourers at a shelter in Delhi. (Debayan Roy)

All the labourers who have now reached Delhi and are residing at a night shelter in Sarai Kale Khan, are now waiting for their ‘release certificates’ from the government of Jammu and Kashmir so that they can begin a new phase of their life.

New Delhi: It was just a few months ago that Kamla Bai went into labour while carrying a plate of freshly made bricks from the construction site to her tent. Soon, she delivered her first child covering in a film of brick dust.

If it was not for the other construction workers, the new mother who was also a bonded labourer would have lost her child.

Kamla and 97 others who were working as bonded labourers in Reasi and Samba district of Jammu and Kashmir were rescued on December 28 and 29, when the world was gearing up to welcome a new year. Among the rescued, there were 20 women and 41 children.

All the labourers who have now reached Delhi and are residing at a night shelter in Sarai Kale Khan, are now waiting for their ‘release certificates’ from the government of Jammu and Kashmir so that they can begin a new phase of their life.

A team of National Campaign Committee for Eradication of Bonded Labour (NCCEBL), Socio Legal Information Centre (SLIC) and ActionAid India, with support of Samba and Reasi District administration, jointly conducted a raid at two brick kiln sites to rescue the bonded labourers, some of whom were working there since several decades. 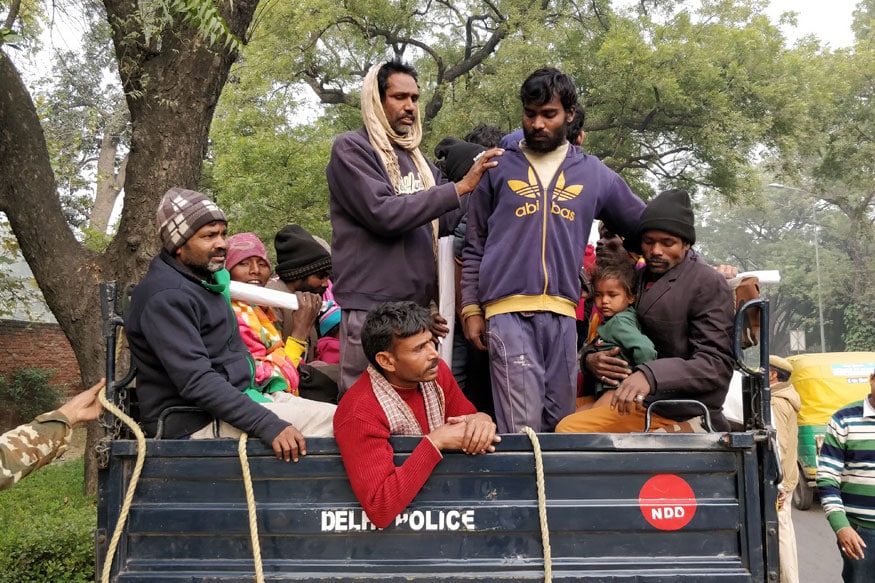 The workers who were rescued submitted a memorandum on Tuesday at the Jammu and Kashmir House in Delhi where they have requested officials to grant them the release certificates without which they would be treated forever as migrant workers and be denied benefits due to the exploited bonded labourers.

Most of the rescued labourers claimed that they went to J&K in search of money and work but soon got trapped in a cycle that was difficult to escape.

Buddhwara Bai was only 17 when she eloped with her lover to Srinagar. Soon after wedlock did she realise that finding work was not easy and exploitation was ‘a norm.’

“I am from Pharari village in Chhattisgarh. Now we have a family of eleven. After hunting for work from Jammu to Kashmir, I started working as a labourer. But whenever I wanted to leave or complained of poor wages, we were threatened. Being scared we were never allowed to leave the state without our families. That is the reason we were not able to leave. If anyone is sick, they allowed only one person to leave and that is the trick employed by them because no one can escape leaving their families behind. Even for buying vegetables or ration we were made to go alone. In this cold, we were left without warm clothes. We were sold to different brick kiln owners without us even getting to know about it,” said Buddhwara Bai, who now suffers from breathing ailments due to continuous exposure to the brick dust.

The members who rescued these labourers complained that most of these construction site owners had a whiff of a possible raid and employed all possible tricks to hide the workers.

Nirmal Gorana, a member of NCCEBL said that the “administration members were only interested in releasing bonded labourers in haphazard manner and no laws were followed”.

“No provisions of Bonded Labour Act, J&K Penal Codes and Labour Laws such as Minimum Wages Act, Payment of Wages Act, and Inter-State Migrant Workers Act were followed. The rescue team from the Samba district administration also tried to manipulate the case by threatening the labourers and passing derogatory comments. In Reasi also we had similar experience,” Gorana told News18.

In most of these sites, the exploitation was on two levels, professional and personal. When the bricks made were not up to the mark, a truck would be used to run over the bricks and they would be ordered to make the bricks again.

According to the rescue team, at both the sites, it was found that the labourers were living under deplorable conditions with no proper shelter, clothes or food for the harsh winters. The labourers for both the sites shared that inspite of repeated request they were no warm clothes or blankets given. No toilet, school or anganwadi facilities were provided.

“The labourers have been abandoned by their respective administrations without any payment of wages or interim compensation of 20 thousand as mandated under the centrally sponsored rehabilitation scheme by the government of India,” said Gorana.

For some labourers, choice to work in J&K was not free but driven by caste bias and no work in their own homeland.

Shanti Devi, a mother of three is a Dalit and hails from Jharkhand. But after struggling for years to find a decent labour work in Jharkhand, she had to make a forced decision to work in J&K, however, soon she realised that it was just the beginning of another never-ending sad saga.

“I have three children. We have been working there since the last eight years. I am from Gumla Zilla in Jharkhand. I was forced to leave the place because we did not have any means to work there. Since we are from a lower caste we were not even employed in villages there. I had too many mouths to feed,” said Shanti Devi clutching onto her two year old in the night shelter.

“Our work places kept changing from Srinagar, Jammu, etc. we were paid around 1000 rupees in fifteen days which was hardly sufficient for our family. We were never allowed to travel with family members as they thought we might escape,” she added.

NCCEBL is all set to file a case in the Delhi High Court and approach the National Human Rights Commission with key demands such as the immediate issuance of release certificates, lodging of criminal cases against employer and officials who abused the workers, and initiate a chief secretary-level inquiry against both district magistrates for breaching law.

Chandan Kumar, member of NHRC’s core group on bonded labour, was also a part of the rescue team. Kumar rued about the fact that officials from J&K house were not ready to believe the letters and records showing that they were indeed bonded labourers.

“This is a vicious cycle of bondage where these bonded workers will end up in situations of re-bondage as both the district administrations have failed to formally recognise them as bonded labour and therefore their native state administrations won’t rehabilitate them,” he said.

Guruvuram, another rescued bonded labour, said that he along with four other families were forced to migrate. The entire group first came to Anantnag with a trafficker and were sold to Sri Ram brick factory owner, Tarsem Lal.

“We worked in miserable conditions, including our small children and pregnant women who were made to work without any pay or wages. Despite repeated requests, we were never allowed to leave the premises and at night they would be kept under the surveillance of security guards to see to it that we do not run away,” he said.