98 years later, the massacre has come back to haunt governments, both Indian and the British. (Image: Getty Images)

The ‘digitised’ records of the episode in Punjab reveal that the British paid about Rs 22 lakh in compensation to the families of estimated 376 people who were killed, and more than 1,200 who were wounded.

Amritsar: The year was 1919. Thousands from Amritsar and other places had, on April 13, gathered at Jallianwala Bagh to celebrate Baisakhi and also to pass resolutions against the infamous Rowlatt Act, which was aimed at curbing civil liberties of Indians.

The British officer, a 55-year-old Colonel Reginald Edward Harry Dyer, who during that time held a temporary rank of Brigadier General, arrived at the area, with an army of Gorkha, Baluchi soldiers, and an armoured vehicle, at around 4:30 pm in the evening.

On his command, the soldiers made sure the civilians were trapped and then opened fire with fifty .303, Lee Enfield, bolt action rifles. As many as 1650 bullets of 7.92 mm calibre were fired in less than 10 minutes, leaving hundreds dead or injured. Dyer was remorseless. He later reportedly said if his armoured car with a mounted machine gun could have gained access through the narrow gates to Jallianwala Bagh, he would have opened fire with the machine gun and killed every single person. The sheer brutality of the act, the targeted firing at peaceful civilians, and the guiltless justifications offered by Dyer pushed Indians from every corner of the country, and later even the British government, to condemn the massacre. Rabindranath Tagore renounced his knighthood in protest and the British were compelled to institute a committee of inquiry, chaired by Lord Hunter. The committee’s report censured Dyer, saying that in “continuing firing as long as he did, General Dyer committed a grave error.” 98 years later, the massacre has come back to haunt governments, both Indian and the British. The ‘digitized’ records of the episode in Punjab reveal that the British paid about Rs 22 lakh in compensation to the families of estimated 376 people who were killed, and more than 1,200 who were wounded.

The Birth of the special British Jallianwala committee

Records of the then British Punjab Government recently digitized by a Non-Governmental Organization – Punjab Digital Library, led by mathematician turned historian Davinder Pal Singh has revealed startling details of the debates that raged in official correspondence to decide who should be compensated how much and for what category of loss.

Several British officers, the records say, were opposed to the liberal compensation suggested by the specially appointed committee to look into all the cases and recommend payouts.

Much debate ensued and the British finally decided to set up a system to award compensation to those who were killed, injured or had lost their property in disturbances in Punjab in the aftermath of the Jallianwala Bagh incident. On February 12, 1921, just short of two years after the massacre, British officers serving in Punjab, Shimla and Delhi managed to complete a major task. The Deputy Commissioner of Amritsar, H.D. Craik, wrote to the Chief Secretary to the Government of Punjab that he was replying to an urgent telegram sent the previous day. He was sending – in duplicate – the complete list of persons killed at Jallianwala Bagh. He also added, “A list of wounded persons is under preparation and will follow as early as possible.”

Now these rediscovered documents, which were found in four files of the Home Department of the British Government in Punjab, are once again stirring controversy and debate over compensation owed by the British as also the Indian Government to those who suffered. “Files are generally stacked and kept under lock. While we were digitizing, these records came our way and we saw written on four sets of files – ‘Compensation Awarded to the Jallianwala Bagh Victims’. The interesting thing was that I felt the committee wanted to give compensation. They found ways to pay the victims. It was a genuine attempt to pay. They did not try to hide,” says Davinder Pal Singh.

Weighing the dead, one penny at a time

The records state many stories, some of what one could call ‘unjust’ or ‘unfair’. Another striking revelation from the records remains how authorities back then differentiated among the victims on the basis of societal and economic basis. C.M. King, an Indian Civil Service Officer posted as Commissioner of Punjab, then stationed at Lahore, wrote on December 31, 1920 that he had received a sum of Rs 5,000 for disbursing quietly to any injured persons that come to light through confidential inquiries.

As late as February 9, 1921, the British had paid a meagre sum of Rs 13,050 to the dependents of those killed. Little did they realize the total amount would go up to Rs 22 lakh, within a year after that. The digitised records reveal the correspondence trail among British officers as they debated the quantum of compensation, the source of funds and mechanisms of disbursal. The list, dated February 12, 1921, names those killed.

It starts with 25-year-old Gagan Nath, son of Ramm Dass. He is followed by 48-year-old Mohn Lal, son of Bahna Mal, and then the list goes on and on through Hardiyal, Ram Das, Ganesha Singh and ends at 40-year-old Warrior, son of Alai Kasai. 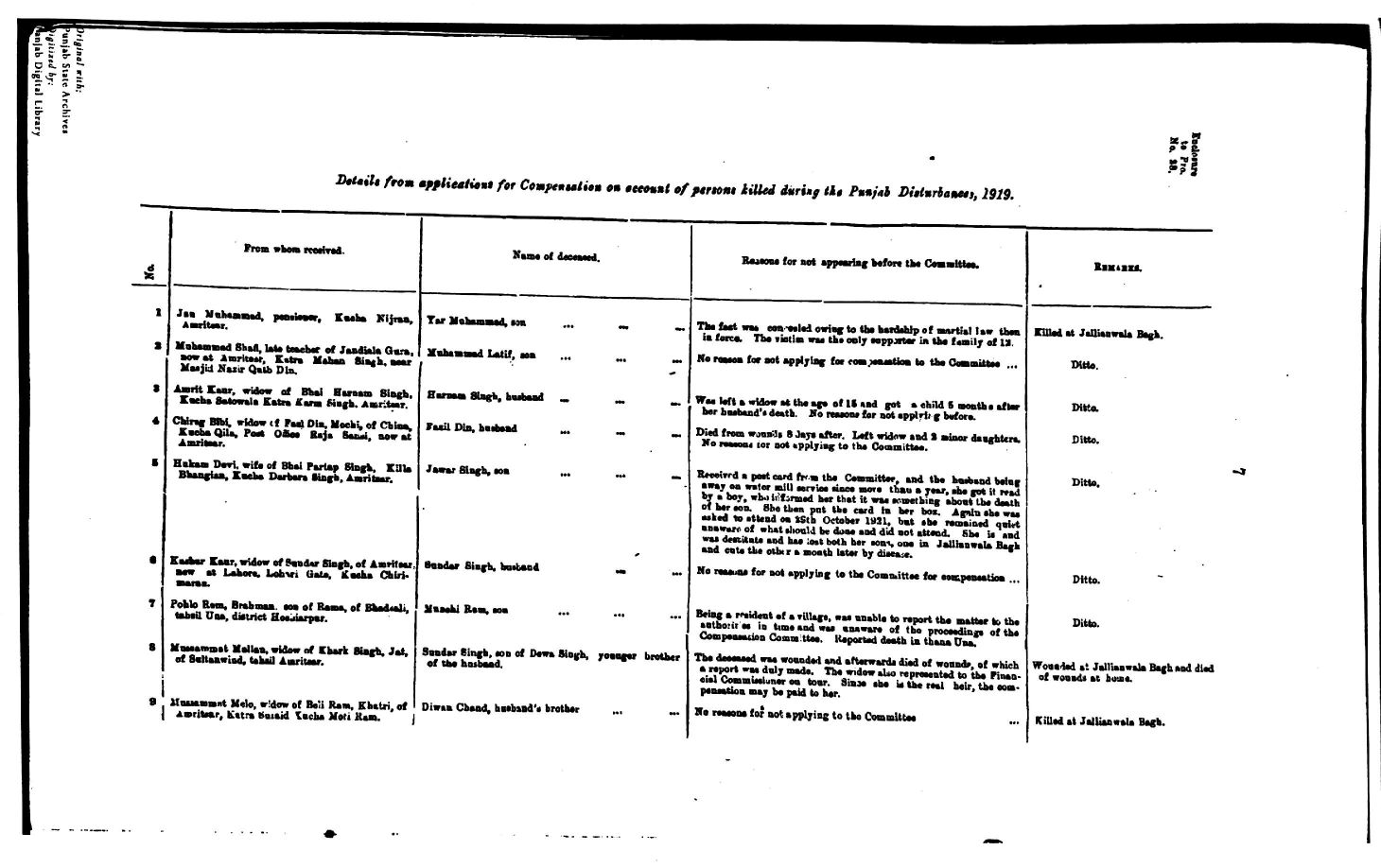 Of the 376 killed, British lists reveal, that those who lost their lives to the hail of bullet fire ranged from nine-year-old Sohn Lal, son of Vasso Mall, to 80-year-old Nathu. Two women – Bibi Har Kaur, wife of Hardit Singh from the Lopoke area of Amritsar, and Bisso, sister of Jamadar Sher Singh, were also shot dead.

Take Lakshmi Chand, a shopkeeper for example. He was awarded Rs 60,000 after his leg was amputated. On questioning, the committee explained the extravagant grant stating, “He was a very rich man with an income of Rs 11,500 a year, thereby able to enjoy life to the full and prevented by his injury still more from enjoying life fully in future than he was from earning as full an income as he had done in the past.” Meanwhile, Muhammad Din, 22 years old, a weaver and silk cleaner whose left arm was permanently disabled was awarded Rs 4,126 as compensation for injury. A 19 years old butcher was awarded just Rs 170 as he had a petty bullet wound. However, Milkhi Ram, 33 years old, a goldsmith whose arm was permanently disabled was awarded a hefty sum of Rs 22,823 as compensation to make up for loss of livelihood and his expertise.

He says they have just been given the status of freedom fighters but get no compensation or financial support from the government.

Behal said he was not even born when the incident happened and has no idea of the details of the British compensation, whether it was paid and how much was paid to whom.

Jyoti Kamal has now seen the constant swing of human enterprise and the shifting mosaic of human behavior as a journalist for over 11 years. From prin...Read More