A Parliamentarian for Record 40 years, Jagjivan Ram Had Earned Immense Praise for His Role in 1971 War

He took charge of the defence ministry in June 1970 and had exactly 17 months to prepare for the uphill task that he lay before him. The morale of the forces had to had to be boosted and critical deficiencies were to be made up.

In the run-up to the war, as the defence minister, he briefed Parliament every second or third day and made public speeches.

Born on April 5, 1908, at a village in Chandwa near Arrah in Bihar, Babu Jagjivan Ram was elected to the Bihar Assembly in 1937.

A student of the Banaras Hindu University where he faced caste discrimination, Jagjivan Ram was instrumental in the establishment of the All-India Depressed Classes League in 1935.

In 1946, he became the youngest minister in Pandit Jawaharlal Nehru’s cabinet and was a prominent figure in the high-profile Indian delegation that attended the international convention on labour in 1946 in Geneva.

This delegation was headed by AN Sinha, a Gandhian thinker and statesman from Bihar. He was the chief political mentor of Jagjivan Ram, who holds the world record of uninterrupted representation in Parliament for over 40 years from 1946 to 1986.

He also holds the unique record of serving as the minister and deputy prime minister in the Union Cabinet for 31 years. With his remarkable administrative ability, he not only effectively met the challenges of nation-building, but also streamlined the several ministries he held over the years.

However, it was his role as the defence minister (27 June, 1970, to 10 October, 1974) that earned him immense praise. Jagjivan Ram is credited for India’s victory against Pakistan. The war that led to the creation of Bangladesh was also the first war that India won.

He took charge of the defence ministry in June 1970 and had exactly 17 months to prepare for the uphill task that he lay before him. The morale of the forces had to be boosted and critical deficiencies were to be made up. 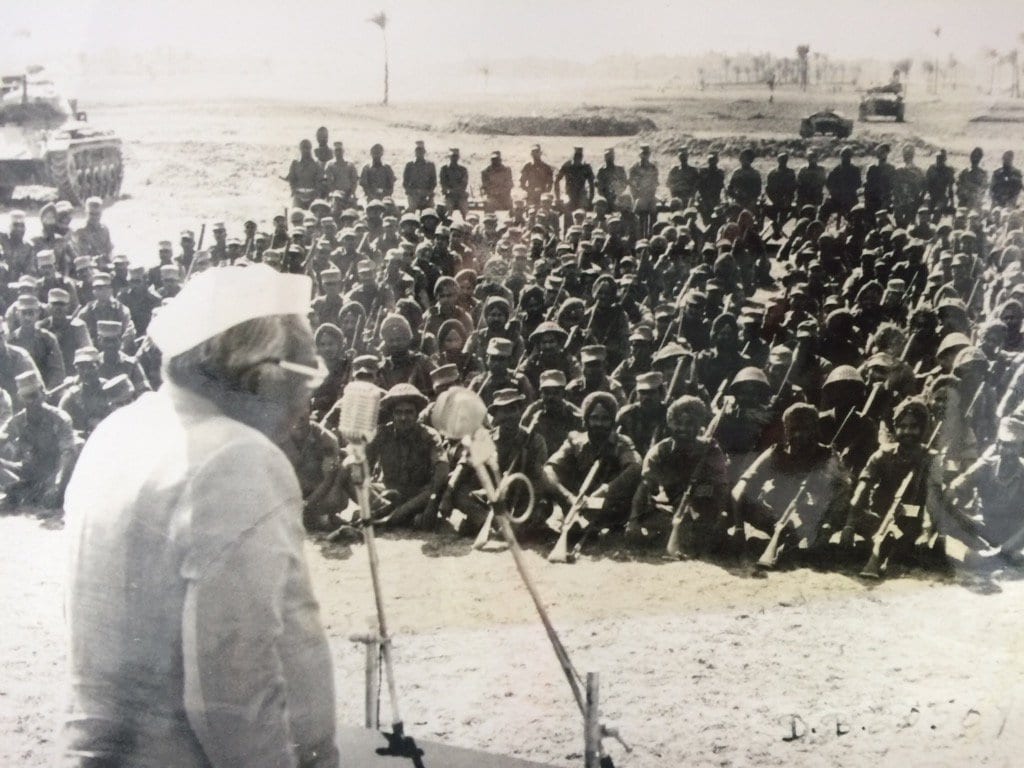 He undertook this task in right earnest. He went around the country, to every border post and said, “We were not going to fight as we did not have the history, culture and tradition of attacking. We do not have hegemonistic designs, but if the war is imposed on us, then the war would not take place on the Indian soil. We would push back the enemy and the war would take place on their soil.” That was what really electrified the armed forces and this was what he maintained right through.

When the people of East Pakistan (now Bangladesh) rose in revolt against the oppression of the Pakistani military and the war finally broke out between India and Pakistan, he showed unequal courage, a rare far-sightedness and led the war to a successful conclusion in 1971.

Though initially not in favour of the war, he, nonetheless, wanted justice to prevail as Pakistani troops had carried out mass genocides in Bangladesh and made preemptive attacks on India.

He was also instrumental in the creation of a ‘joint command' of Bangladeshi and Indian forces for the final assault which led to the victory.

In the chronology of key events, Jagjivan Ram made two important announcements in Parliament. In October 21, 1971, he said any war with Pakistan would be fought on Pakistani soil and India would not vacate territories occupied during conflict.

On December 4, he told Parliament that the Indian Air Force (IAF) had responded to Pakistani air attacks with strikes beginning the previous evening against targets inside West Pakistan.

In the run-up to the war, he briefed Parliament every second or third day and made public speeches.

He did this to create public opinion and make representatives aware of what was going to happen in the frontiers and how war-prepared the nation was. He was reaching out to every person in India — whether in the city or rural areas — telling him or her that there was nothing to fear and that the nation would rise to the occasion and make it a historic war. He created the atmosphere and that is what counted.

He once told his daughter that the defence forces make supreme sacrifices and that “you may or may not stand and pay respect to anybody else, but if you see a soldier, just stand up, salute and pay respect”.

He used to say that it was not easy to lay down one’s life for something abstract. So, he tried to boost the morale of the armed forces that had already seen three wars.

He felt that India’s defence was not only about the Army going and defending the border. It also meant that every citizen of the country rose up to defend the country and its honour.

While staying constantly in touch with his own forces, he also interacted with the Mukti Bahini with regard to what help and assistance India could provide.

The war also unique in the sense that it was for the first time that the Navy was also engaged. The coordination, logistics, exact precision and chain of command on another land had to be managed along with supplying of arms and ammunition and sending across messages.

In fact, the surrender of General Niazi had happened because of India’s excellent communication skills.

A report appeared in newspapers and television that the seventh fleet was diverted by America from Vietnam to the Bay of Bengal and that many people very worried. However, it did not unnerve Jagjivan Ram.

He said, “Those people in Vietnam ate rice and water and had no arms and ammunitions. Yet they were able to chase away the seventh fleet. We would do the same.”

He had tremendous faith in human spirit and will and that was central to the 1971 war.

Defence analysts and military veterans profusely appreciated Jagjivan Ram for his stewardship during the war. Chief of General Staff in Eastern Command, Lt Gen (Retd.) JFR Jacob, described him as "perhaps the best defence minister we (India) have had".

"He had an excellent grasp of military strategy. Being an able administrator, it was Jagjivan Ram who made sure that the requirements of the three Services, in terms of manpower, weaponry, equipment and infrastructural facilities were provided, as far as possible”.

Jagjivan Ram also ensured liberal financial support and better employment opportunities to the wounded and families of the martyrs.

His life was a practical demonstration of single-minded pursuit of equal opportunity in social and economic structures. He believed that democracy and caste system cannot co-exist and that it is through the working of democracy and adherence to constitutional values that one can truly seek to transform society.

(The author is a retired major general and has co-authored a book titled 'Valour & Wisdom: Genesis & Growth of the Indian Military Academy')