Abhijit Banerjee, along with Esther Duflo and Michael Kremer, has been bestowed with the honour 'for their experimental approach to alleviating global poverty.'

"The research conducted by this year's Laureates has considerably improved our ability to fight global poverty. In just two decades, their new experiment-based approach has transformed development economics, which is now a flourishing field of research," said the Nobel committee in a statement.

The Academy said the work of the three economists had shown how the problem of poverty could be tackled by breaking it down into smaller and more precise questions in areas such as education and healthcare, making problems easier to tackle.

"As a direct result of one of their studies, more than five million Indian children have benefited from effective programmes of remedial tutoring in school," the Academy said in a statement. "Another example is the heavy subsidies for preventive healthcare that have been introduced in many countries."

Banerjee, 58, was educated at the University of Calcutta, Jawaharlal Nehru University and Harvard University, where he received his Ph.D in 1988. He is currently the Ford Foundation International Professor of Economics at the Massachusetts Institute of Technology, according to his profile on the MIT website. 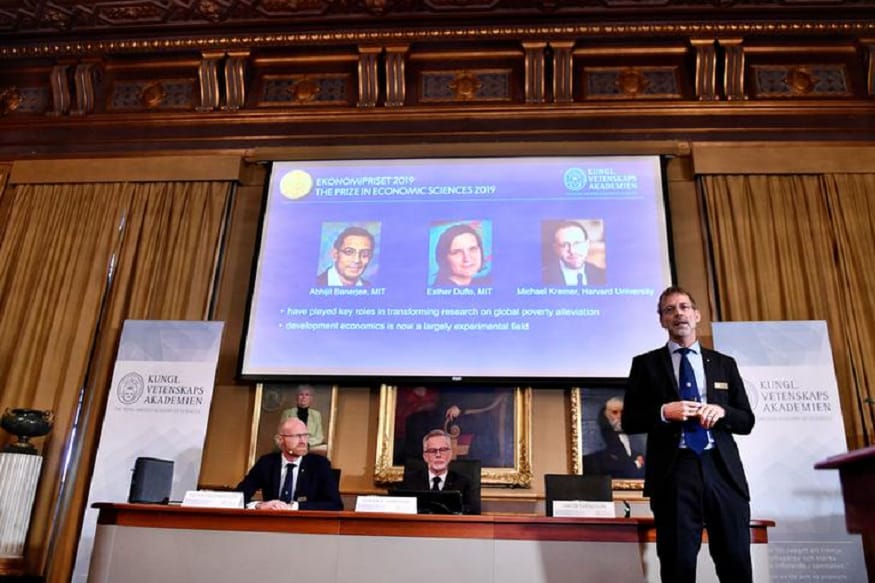 In 2003, Banerjee founded the Abdul Latif Jameel Poverty Action Lab(J-PAL), along with Duflo and Sendhil Mullainathan, and he remains one of the lab's directors. He also served on the UN Secretary-General's High-level Panel of Eminent Persons on the Post-2015 Development Agenda.

The 9 million Swedish crown ($915,300) economics prize is a later addition to the five awards created in the will of industrialist and dynamite inventor Alfred Nobel, established by the Swedish central bank and first awarded in 1969.

Banerjee is a past president of the Bureau for the Research in the Economic Analysis of Development, a Research Associate of the NBER, a CEPR research fellow, International Research Fellow of the Kiel Institute, a fellow of the American Academy of Arts and Sciences and the Econometric Society, and has been a Guggenheim Fellow and an Alfred P Sloan Fellow and a winner of the Infosys prize.

He is the author of a large number of articles and four books, including Poor Economics, which won the Goldman Sachs Business Book of the Year. He is the editor of three more books and has directed two documentary films.

He also served on the UN Secretary-General's High-level Panel of Eminent Persons on the Post-2015 Development Agenda, the website said. Duflo, born 1972 in Paris, received her PhD in 1999 from MIT. She is only the second woman and the youngest to win the Nobel in Economic Sciences.

In her research, she seeks to understand the economic lives of the poor, with the aim to help design and evaluate social policies. Duflo is the Abdul Latif Jameel Professor of Poverty Alleviation and Development Economics in the Department of Economics at the MIT.

She has worked on health, education, financial inclusion, environment and governance. Duflo's first degrees were in history and economics from Ecole Normale Superieure in Paris.

With Banerjee, she co-authored the book, 'Poor Economics'. Duflo is the Editor of the American Economic Review. She is also a member of the National Academy of Sciences and a Corresponding Fellow of the British Academy.
Tags: