The Dakota, christened 'Parashurama', will bear the tail number VP 905, the same as the first such aircraft in the Indian service that transported the troops during the 1947 war to Jammu and Kashmir.

The Dakota, christened 'Parashurama', will bear the tail number VP 905, the same as the first such aircraft in the Indian service that transported the troops during the 1947 war to Jammu and Kashmir. (Photo courtesy: Rajeev Chandrasekhar@rajeev_mp)

New Delhi: A fully-refurbished World War II-era Dakota, belonging to the vintage of the iconic military transport aircraft that played a crucial role in the 1947 Indo-Pak War, is all set to be flown to India next month, to become a proud possession of the IAF. The plane, which underwent a six-year-long restoration in the UK, will join the vintage fleet at the Hindon Air Base in Uttar Pradesh.

The aircraft is a gift from Rajya Sabha MP Rajeev Chandrasekar to the Indian Air Force, and at a function held in New Delhi on Tuesday, the Bengaluru lawmaker ceremonially handed over the papers and deeds to Air Chief Marshal B S Dhanoa.

Hailing the qualities of the aircraft, the Chief of Air Staff, said, "They were introduced in the 1930s... As part of the 12th Squadron of the then Royal Indian Air Force (RIAF), Dakotas were the main workhorse in Ladakh and Northeast region. And, they intervened in time to save the Valley of Kashmir (in 1947)."

"Military historian Pushpindar Singh had said that Dakota is the reason why Poonch is still with us. They helped in hastening the fall of Dhaka and liberation of Bangladesh. And, in 2014, we had given a shell on the Dakota to the Bangladesh Air Force," Dhanoa said.

Douglas DC3 aircraft, better known as the Dakota, carried the troops of the Army's 1 Sikh Regiment to Srinagar on October 27, 1947, during the first Indo-Pak War, besides carrying supplies and refugees. The Dakota, christened 'Parashurama', will bear the tail number VP 905, the same as the first such aircraft in the Indian service that transported the troops during the 1947 war to Jammu and Kashmir. 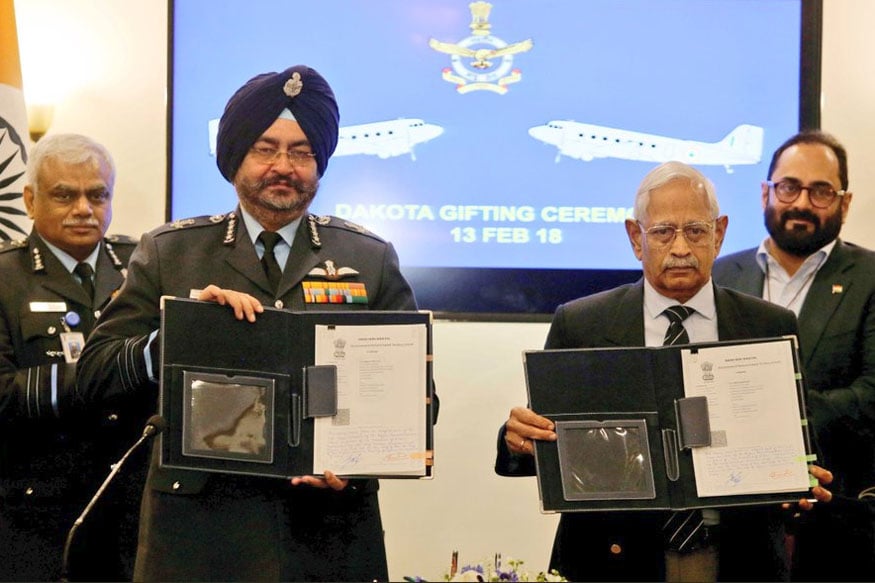 Chandrasekar's gift, will make it the first vintage Dakota for the IAF, which currently, has a Tiger Moth and a Harvard aircraft stationed at the Hindon Air Base.

"The Dakota is currently kept at Coventry airfield in the UK. It is set to fly next month. The vintage plane will traverse over 4,800 nautical miles. From the UK, the route will be through France, Italy, Greece, Egypt, Oman, in that order. In India, the first stop would be Jamnagar, from where it will fly to Hindon," he told PTI on the sidelines. According to a short film screened at the function, the aircraft was acquired from scrap and underwent six years of painstaking restoration in the UK, and the IAF had technically accepted it late last month.

The IAF has helped the MP in getting the aircraft registered and in upgrade of the navigation system. "Since it has to fly through multiple foreign airspace, we helped them in getting permission," the IAF chief said. In his address, he had called the gifting of the Dakota to the IAF a "great gesture" for funding the acquisition, repair and eventual ferrying of the aircraft. The MP said, "I acquired it around 2011 and this gift is a permanent way of honouring the men and their machines, who make us all proud today as a nation," adding, "finding and restoring this bird was a huge challenge".

Chandrasekhar's father Air Commodore (retd) M K Chandrasekhar, who was present at the function, was a Dakota pilot in the IAF, and the lawmaker said, "the seeds were sown perhaps very young."

"My father is 84 now. And, I grew up seeing him flying Dakota. So, my passion for planes is natural. And, it is on behalf of my father that this gift is being made to the IAF, in dedication to the air warriors. And, I hope it will inspire future air warriors," he said.