After an Evening of Horror, How 2,000 Students Battled Fear to Reclaim JNU Campus at Midnight

Haunted by memories of violence in Jamia and AMU, many students slept with pepper spray in their hands in case they had to defend themselves.

Police and others outside the main gate of the JNU campus after some masked miscreants ran riot in the campus on Sunday. (PTI Photo)

New Delhi: The Jawaharlal Nehru University does not sleep – the vibrant space buzzes with debates and discussions over tea till late hours on most days. But the night of January 5 was different. The students, huddled in groups, could not sleep. This time it was panic and fear that kept them awake.

Hours after masked goons rampaged through the campus of India’s premier university, assaulting students, professors and even medical staff while shouting incendiary slogans, some decided to pack up and leave for the safety of home.

Others, who could not leave, made calls home or contacted teachers and student leaders for support. Many slept with pepper spray in case they had to defend themselves.

Haunted by the memory of what had happened in Jamia Millia Islamia and Aligarh Muslim University last month and not wanting a repeat, they gathered in large groups – hundreds came together at the Sabarmati hostel, where doors and windows had been smashed and rooms, particularly those belonging to Muslim and Kashmiri students, had been vandalized just a few hours ago.

More than 20 of their friends, and two professors, had suffered head injuries in the attack they said was by members of the right-wing ABVP (Akhil Bharatiya Vidyarthi Parishad), the student wing affiliated to the ruling BJP, and were in the AIIMS Trauma Centre.

After spending what seemed like an eternity holed up in rooms, hiding from the violence, the students decided they had had enough and planned a march as a show of strength. It was time to reclaim the campus.

JNUSU’s vice-president Saket Moon said the fear had to be battled. “The police came at night and intimidated the students. We were scared and made calls to each other. We decided we will peacefully start from Sabarmati, gather more students and have the North Gate opened. Till then we won’t sleep,” he said. 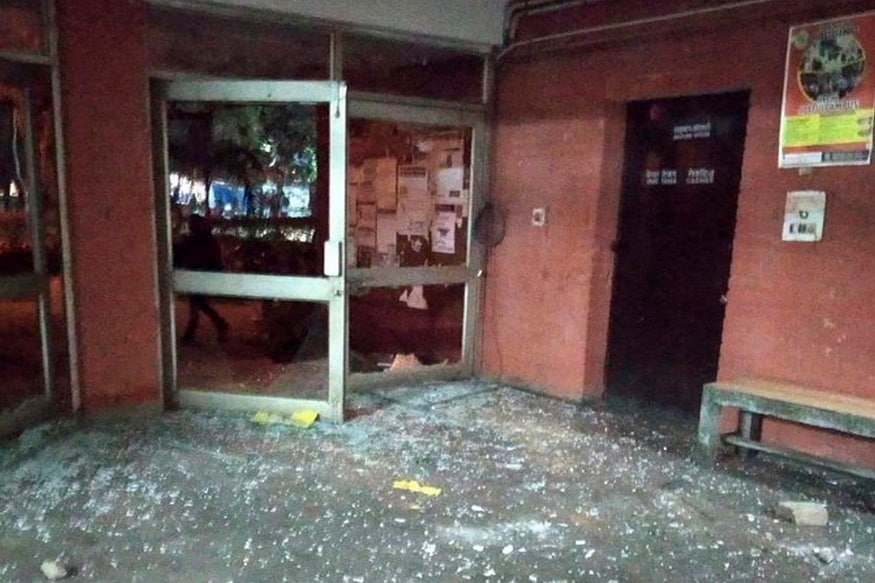 A view of the vandalized Sabarmati hostel in JNU campus on Sunday.

The march was to the North Gate, where the JNU Teachers’ Association had tried to address the media around 9pm and brief them about the injuries inflicted on 26 students by masked hooligans, identified as ABVP members by many of them.

The ABVP has denied any role in the violence. Chatter on WhatsApp before the attack began, however, suggests some members of the right-wing outfit were involved in planning and posting threatening messages. The police, whose role in the entire episode has come under scrutiny since cops stood as mute spectators as the mob assaulted students, has said four members involved in the violence have been identified so far, but no arrests have been made yet.

The North Gate had remained closed most of the night, even while the attackers stood just outside of it, chanting slogans such as “Desh ke gaddaron ko Goli Maaro Saalon Ko (shoot the traitors).

The streetlights on the entire stretch had been turned off and supporters alumni like Yogendra Yadav were manhandled by hooligans for speaking against the act of violence. The police also asked Yadav to leave as he tried to speak to teachers on the other side of the gate, asking if students were safe. Cops said he was disrupting the peace, even as the mob behind him chanting threatening slogans was not removed. Students and others shout slogans outside the JNU campus in New Delhi on Sunday. (PTI Photo)

Some students were also spotted by this correspondent outside the Periyar hostel at 9:20 pm while the entire campus road was deserted with only police walking in. "This is a guerilla war between vampanthi (leftists) and others..." said one in the group on being asked why the violence had broken out. He identified himself as one Prashant Mishra and an ABVP supporter.

It was in this atmosphere that around 2,000 students gathered outside the Sabarmati hostel before midnight and decided to march to the North Gate.

Ranjani Mazumdar, a faculty member at JNU’s School of Arts and Aesthetics, said she along with other teachers got several calls from scared students.

“The students huddled among each other and were terrified. At 11:00 pm I got a call from students who said that they were restless and could not sleep. They all wanted to come to the gate. Many of them had gathered outside hostels... After midnight we got the campus back.”

The students, teachers marched to the gate and got it opened. The street-lights were turned on. The hooligans diminished and support poured in for JNU. “It was an overwhelming feeling,” said the JNU students and teachers.