After Assurance to Bangladesh, How Will Govt Deal With 19 Lakh 'Non-citizens': Chidambaram on NRC

Chidambaram asked how long will the 19 lakh people left out of the NRC live with uncertainty, anxiety and denial of civic and human rights.

New Delhi: Senior Congress leader P Chidambaram, who is currently lodged in Tihar jail in connection with the INX media case, on Monday asked the Centre how it will deal with 19 lakh people being declared non-citizens after assuring Bangladesh the NRC process will not affect that country.

The former Union minister said the country is obliged to answer these questions as it celebrates Mahatma Gandhi's humanism. Asking his family to tweet on his behalf, Chidambaram said, "If NRC is a 'legal process', how will the legal process deal with the 19 lakh persons who have been declared non-citizens."

He asked how long will the 19 lakh people left out of the NRC live with uncertainty, anxiety and denial of civic and human rights. 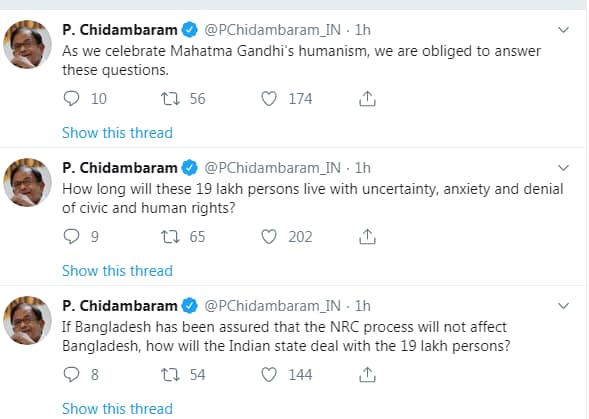 The former finance minister's remarks come in the backdrop of Bangladesh Prime Minister Sheikh Hasina's recent visit to India, during which she raised her concerns with Prime Minister Narendra Modi over roll out NRC in Assam, an exercise carried out to identify genuine Indian citizens living in the state and weed out illegal Bangladeshis.

Bangladesh said it was keeping an eye on developments relating to NRC rollout even as India conveyed to it that the issue was an internal matter of the country. "Prime Minister Modi has explained to Prime Minister Hasina the process that India has put up in terms of making sure that everybody is eventually included in this (NRC)," Bangladesh foreign secretary Shahidul Haque hadsaid.