The celebrations will continue on March 10 and 11 with grand receptions and exquisite performances lined up. A key highlight of the receptions will be a musical fountain-cum-dance show.

Akash Ambani and Shloka Mehta during their wedding ceremony in Mumbai on Saturday.

Mumbai: Akash Ambani, the son of Reliance Industries chairman Mukesh Ambani and Nita Ambani, tied the knot with childhood friend Shloka Mehta, daughter of diamantaire Russel Mehta and his wife Mona, in a grand ceremony at the Jio World Centre in Mumbai on Saturday.

Among the guests at the wedding were former UN secretary general Ban Ki-Moon and his wife, former British PM Tony Blair and his wife Cherie Blair, Google CEO Sundar Pichai and his wife Anjali Pichai, cricket legend Sachin Tendulkar and his wife Anjali Tendulkar, Union minister Smriti Irani and her husband Zubin Irani and Congress leader Kapil Sibal. A host of other prominent names from India and abroad joined the celebrations.

The wedding festivities started off on a traditional note with the groom paying respects to his paternal and maternal grandfathers soon after arriving at the venue. 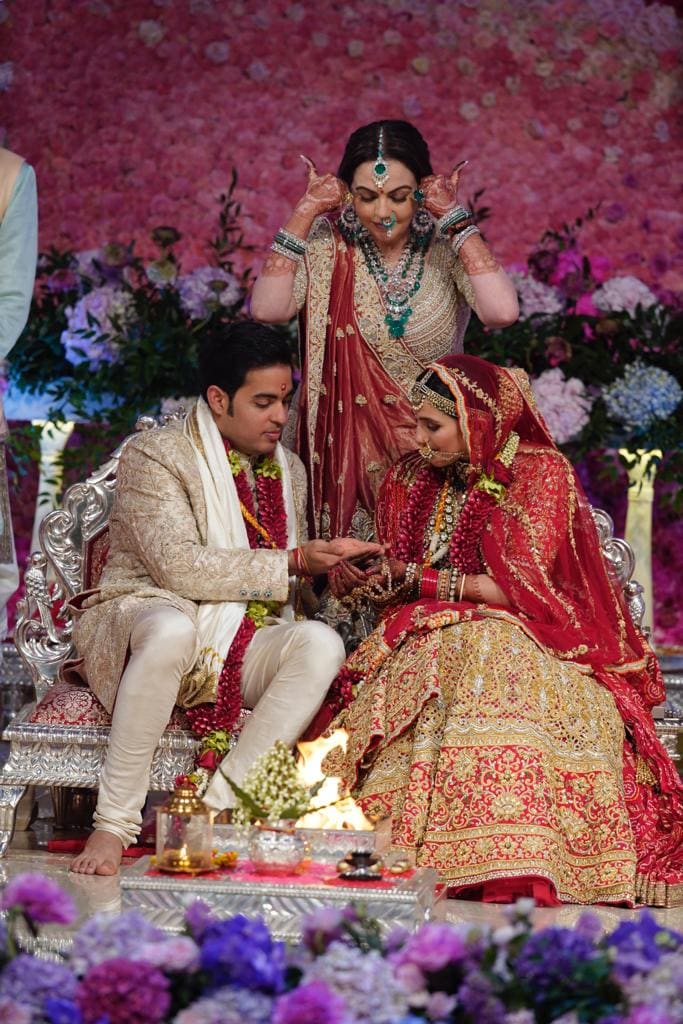 Nita Ambani with the newly-weds during the wedding ceremony.

The guests arrived at the pre-wedding concourse for the saafa-tying ceremony even as composers Vishal-Shekhar set the tempo with some foot-tapping music. Seen participating in the saafa ceremony were Tony Blair, Ban Ki-Moon and Sachin Tendulkar with global CEOs.

Corporate honchos joined the baraat which proceeded from the concourse through the driveway to boisterous music and dancing. Google CEO Sunder Pichai, global heads of Bank of America and JP Morgan shook a leg with the baraatis.

The baraat entered the wedding hall at the Jio World Centre where wedding ceremonies, including Pokhwanu, Jaimala, Saptapadi and Kanyadaan were solemnised. The guests were treated to various delicacies from across the world as part of the wedding dinner.

Isha Ambani with the couple during the wedding ceremony.

The celebrations will continue on March 10 and 11 with grand receptions and exquisite performances lined up. A key highlight of the receptions will be a musical fountain-cum-dance show which integrates the mesmerising and colourful movements of the water fountain to a spectacular dance performance on stage and an aerial dance act right above the stage and the water fountain. In many ways, it would signify the lyrical symmetry between water, earth and sky.

Set around the devotional and ancient theme of Raas Lila of Lord Krishna, Radha and the Gopikas of Vrindavan, the presentation will see a collaboration of more than 150 Indian and international artistes. The performance is a way of the family paying obeisance to Lord Krishna, seeking divine blessings for the newly weds.

The special performance will be held on March 10 at the Dhirubhai Ambani Square, a stunning gateway to the globally benchmarked Jio World Centre at BKC, Mumbai. Nita Ambani recently held an inaugural function there for nearly 2,000 underprivileged children from various city-based NGOs.