Among Beautiful People Who Live on Delhi's Killer Garbage Mountain

Sheikh Moinuddin has been a rag picker in Delhi for 15 days. Since the Ghazipur landfill, he has been struggling to make ends meet. Image: Debayan Roy/ News18.com

Despite entry of rag pickers being prohibited in the landfill area, generations have survived on the mountain of garbage in Ghazipur.

New Delhi (Ghazipur): “Woh pahaad ke upar hi sojata tha main, lekin us din ghar chala gaya. Tabse berozgaar hoon (I used to sleep on the top of the mountain, but that day I went home. Since then, I have been unemployed),” said Ansarul Alam, a 13-year-old boy, in broken Hindi with occasional usage of Bengali words.

Alam, like many others, is a garbage collector and a rag picker who remembers spending his childhood either chasing broken glass bottles rolling down the garbage mountain or playing the “game” of collecting the maximum number of usable thermocol boxes.

Despite entry of rag pickers being prohibited in the landfill area, generations have survived on the mountain of garbage.

But after Lieutenant Governor of Delhi, Anil Baijal, ordered an immediate prohibition on dumping of waste following the September 1 landfill collapse, which claimed two lives and injured five others, the worst hit have been the rag pickers, who have no other means to earn livelihood.

It’s, however, imperative to note that the East Delhi Municipal Corporation continues to dump waste at Ghazipur, despite the ban imposed by L-G after strong protest by residents at the alternative dumping site Rani Khera.

Alam and others stay at a slum near the end of Road No 6 towards the Ghazipur dairy. Located beside a row of buffalo sheds, lies a patch of land covered with waste collected from the Ghazipur landfill. The land has a part covered with garbage and plastic waste creating an illusion of a solid land though there is a a pool of sewage and biomedical waste beneath. 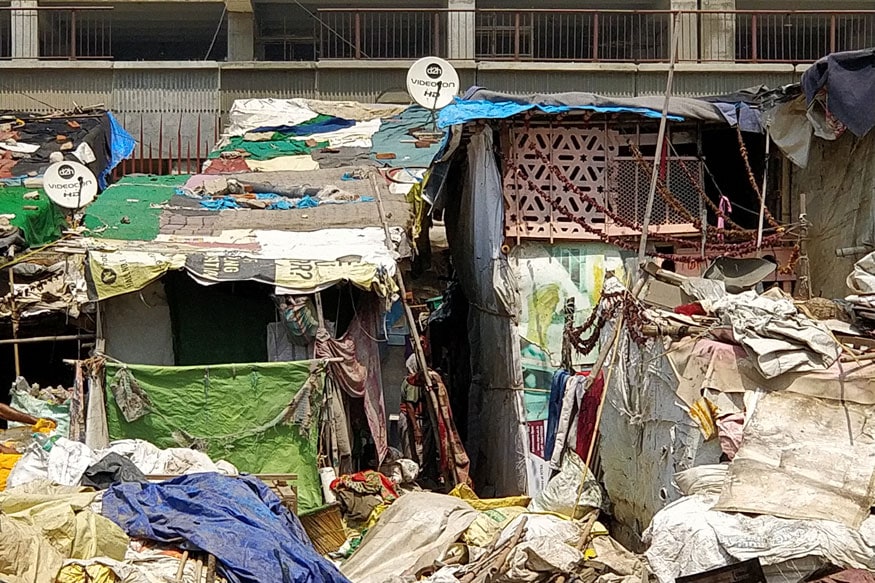 (The settlement of rag pickers where live near the Ghazipur landfill. Image: Debayan Roy)

After crossing a heap of broken plastic bottles and pungent smelling torn clothes, there is a small makeshift shelter. Sheikh Moinuddin, a rag picker, points out to one such structure, made using various pieces of thermocol. “I’ve been a rag picker in Delhi for the last 15 years. I came to the city looking for a job from Haldia district in West Bengal,” he told News18.

“We usually spend our days and nights in the garbage mountain looking for items we can sell. On Thursday night, while collecting garbage, we felt the mountain was moving but did not pay heed to it. But next day, while we were approaching the place, a part of it crashed. Since then we are not allowed to go near the garbage point. Even trucks carrying garbage have stopped coming. Since then most of us are unemployed,” Moinuddin said.

Moinuddin now works near an industrial plant where he collects the waste but gets paid very less. “I can stay hungry, but how will my wife and children remain hungry? This work hardly pays me anything, but at least they can have some rice,” he said.

When asked whether officials have taken note of the situation, Moinuddin is quick to respond with a ‘No.’ “How can they enquire about us? Do they even know we exist?” said the father of three.

The Ghazipur landfill is among the four dumpsites in Delhi and the collected waste had reached a height of 50m, as tall as a 15-storey building. (A view of the garbage mountain in Ghazipur. Image: Debayan Roy)

Rag pickers usually sustain themselves by collecting, sorting, segregating waste and then trading it. In doing so, they help clean up a significant proportion of the 62 million tonnes of waste generated annually in India. Given that rag-picking is a totally informal sector, it is hard to quantify how much waste is collected in this manner. However, according to IndiaSpend, only 75-80% of the waste generated in India is collected by municipal bodies. And more than 90% of India does not have a proper waste disposal system.

A lot of garbage clearing thus is the done informally, by rag pickers who work without any job security, salary or dignity, and expose themselves to various health hazards, like respiratory diseases, cuts, infections and even tuberculosis. An IndiaSpend report suggested the humiliation, harassment, and sexual abuse they face on the streets.

Sheikh is lucky to have found a way to keep the pot boiling when others are only dreaming of work. Mansura, mother of four, is the sole bread- winner of a family of 10, which include her children and her paralysed husband. She cannot remember a day when she did not have to make her way through the pile of garbage looking for recyclable material but now with no income, she and her children stare towards a future of nothing.

“I have been a rag picker since I was eight years old. I am neither a tailor, nor a skilled worker. There aren’t any flats here where I can work as a maid. So, I have nothing to do as of now. My husband waits for medicine and my children wait for food,” said Mansura.

She also spoke of the growing suspicion among the urban elites which prevents them from being hired as permanent labourers. “We are from West Bengal and hence we speak Bengali. But we are often thought of as Bangladeshis. Second, whenever they come to know that we have been rag pickers, they form an opinion that we would steal things. These are the two reasons why we are mostly denied a job,” Mansura said.

But can people like Mansura, Moinuddin and others, who spend their life collecting sacks of hair, soiled sanitary napkins in newspapers, human excreta in polythene, and shards of glass, syringes or nails, claim help from government?

Sashi Pandit, Chairman of All India Kabadi Majdoor Mahasangh (AIKMM), told News18 that the government will neither give them an alternative employment or aid as for the authorities, this class of workers is simply ‘absent in the area.’

“Rag pickers are not allowed in landfills as per law. But still generations have lived picking garbage from landfills. Even if they need help, the government can turn a blind eye. Unorganised Workers' Social Security Act 2008 only remains on paper to provide social security and welfare to this sector,” Pandit said.

“Even the waste management rules demand the informal sector to be included, but that is far away from the reality. The latest such move was to give rag pickers an identity card under Swachh Bharat mission, but even that has only remained on paper. Laws are followed in the country only as per ones convenience,” he added.

Pandit also said that now either NGOs can lend a helping hand to them or they can look for other work. “But we don’t know anything else other than picking garbage. What do we do?” Sheikh asked.