Cases in the state have surged since July 14 and it recorded a whopping 77,278 cases in the last couple of weeks, which indicates that 70% of its total case-load has been registered in merely 14 days.

Andhra Pradesh recorded 10,093 Covid-19 cases on the 29th of July – the highest for any state in India, even higher than Maharashtra who reported 9,211 cases on the day. It was also the highest single-day surge for the state.

Andhra Pradesh has averaged 7,376 cases daily between the 22nd and the 28th of July and witnessed an alarming spike in the last couple of weeks. From being at 8th spot in the total virus-load, the state has jumped to the 4th spot among 13 other major states of the country in just a fortnight. With 1,10,297 cases on July 28, Andhra stood only behind Maharashtra, Tamil Nadu and Delhi.

Cases in the state have surged since July 14 and it recorded a whopping 77,278 cases in the last couple of weeks, which indicates that 70% of its total case-load has been recorded in merely 14 days.

The state’s case-load has also increased by more than 3 times in the last couple of weeks. Its growth multiple of 3.34 in this time-frame is by far the highest amongst the 13 major states of the country, even higher than Karnataka. 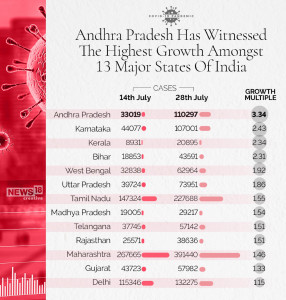 Rise in Positivity Rate But Better Than Most States

The sudden surge in the number of positive cases has been a direct consequence of the high numbers of testing in the state, with a large sample being from the containment zones. The Positivity Rate in the state has gone up from 1.14% on June 15 to 1.64% on June 30 and then from 2.91% on July 15 to 6.3% on July 28.

However, its Positivity Rate remains below the National Average of 8.69% and lower than most of the other major states. With a total of 1,148 fatalities on July 28, the overall Mortality Rate (MR) in the state stood at 1.04%, remaining lower than most other states. It indicates that the state has done a great job in containing the number of Covid-19 deaths. Andhra’s most populous district East Godavari, with a population of approximately 50 lakh, has the maximum case-load in the state and has seen its cases rise five-fold in the last two weeks. Kakinada, the district headquarters, has emerged as a major hotspot though large crowds of people are still located in markets and other public places.

Visakhapatnam, the largest city in the state, had done a remarkable job in containing the spread of the virus and reported just 542 cases till the end of June. It was an exception amongst the big and major cities of the country, most of which had been severely affected by the pandemic.

However, cases started to rise at a faster rate in July and the district has witnessed an alarming rate of 5,288 cases in the last week itself (July 22-28), which implies that the last 7 days have accounted for more than two-thirds (68.52%) of the total virus case-load in Visakhapatnam. Andhra Pradesh has so far done a commendable job in controlling the number of Covid-19 cases and deaths. However, as the infection surges, the next two to three weeks will be crucial in its fight against the pandemic.