In a full-page advertisement in English dailies, the government blamed the prevalent militancy and their “vicious campaign” and “motivated propaganda” for perpetuating the shutdown.

The Jammu and Kashmir administration on Friday issued a full page advertisement in local newspapers urging people to end the self-imposed shutdown that took shape after the government started lifting restrictions put in place post the scrapping of the state’s special status on August 5.

While threats by militants asking residents to observe a complete shutdown in protest of the Centre’s decision to abrogate Article 370 have been blamed, it has partly been a ‘people’s curfew’ that has kept them indoors.

It is unclear whether it is fear or anger, or both that has sustained the self-imposed lockdown, but it has managed to puncture the government’s claims of normalcy returning to Kashmir as images show desolate streets, closed markets and empty institutions.

In a full-page advertisement in English dailies, the government blamed the prevalent militancy and their “vicious campaign” and “motivated propaganda” for perpetuating the shutdown.

Shutdowns have been a regular part of life in Kashmir, with separatists frequently ordering them to protest against alleged Army excesses. “For over 70 years now, the people of J&K have been misled. They have been victims of a vicious campaign and motivated propaganda that has trapped them in an endless cycle of terrorism, violence, destruction and poverty,” the advert read.

Although the government has reopened schools and colleges, students have been staying away while shopkeepers have kept their shops shut. Public transport has also stayed off the roads and petrol pumps open only for half the day as people refuse to step out of their homes in popular response to the recent change in the state’s constitutional status. 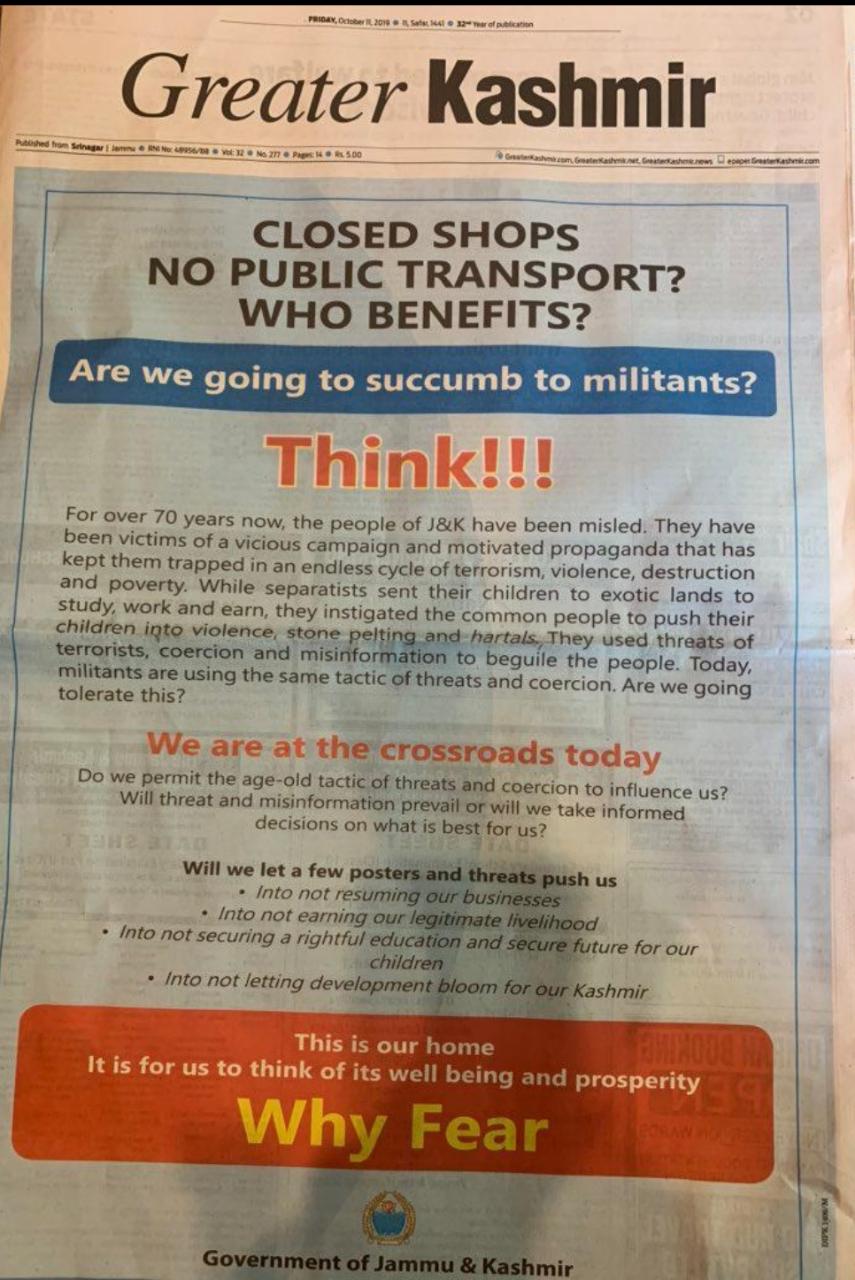 The advert attributes this self-imposed lockdown to the people’s fear of attacks from militants who have “instigated the common people to push their children into violence, stone pelting and hartals.”

“We are at crossroads today,” the notice declares in bold letters as it goes on to pose questions to the people of Kashmir on whether they will “permit the age-old tactic of threats and coercion” to influence them. “Will threat and misinformation prevail or will we take informed decisions on what’s best for us?” it added.

Reacting to the advert, Mehbooba Mufti's daughter through her Twitter handle, took a swipe at the government's "pleading tone". "Notice the pleading tone of state admin in a front page ad for Greater Kashmir. Despite the brutal lockdown since 5th August, Kashmiris have been resolute about a civil curfew as a mark of protest. If the authorises truly cared for people, they’d lift the telecom ban," she said.

Notice the pleading tone of state admin in a front page ad for Greater Kashmir. Despite the brutal lockdown since 5th August, Kashmiris have been resolute about a civil curfew as a mark of protest. If the authorises truly cared for people, they’d lift the telecom ban pic.twitter.com/RC64DrO676

The Narendra-Modi led government on August 5 sent in thousands of additional troops, imposed a sweeping curfew, arrested thousands, and cut virtually all communications the Valley in the wake of its decision of stripping the region of its special status and downsizing it into two union territories.

The people, however, have refrained from stepping outside their homes even as restictions issued in early August—to close down educational institutions and offices, blackout telecommunication and impose Section 144, preventing the assembly of five or more people in public—were gradually relaxed.

The government has maintained that the abrogation of the region's semi-autonomy was necessary for development and eradication of "terrorism" in the region. “This is our home, it is for us to think of its well-being and prosperity, why fear?” the advert adds in the end.