Although, India has been arguing that its per capita carbon emissions are far less than any of these countries, it is still the fourth largest emitter of carbon in the world after China, US and EU.

Hridayesh Joshi
As more than 190 countries converge at the Spanish capital of Madrid for the two week-long annual climate change summit, the poor and developing nations will once again brace themselves for a tough bargain with the rich and developed world.

At the annual UN climate conference, which is also known as Conference of Parties (CoP25), the heads of state, scientists, and seasoned negotiators from 200 countries will meet to chalk out a strategy to combat the global warming and its impact.

Besides the state delegations (known as parties), a large number of observers mainly from civil society groups and contingents of media from all over the world descend at the venue to oversee the proceedings.

Delegates will try to put the finishing touches on the rules governing the 2015 Paris climate accord at the December 2-13 meeting, including how to create functioning international emissions trading systems and compensate poor countries for losses they suffer from rising sea levels and other consequences of climate change.

The Paris agreement will come into force next year in 2020 with the UN climate change conference in Glasgow, which will aim to determine the future course of efforts.

In last 15 months, several scientific reports, including the findings of the Intergovernmental Panel on Climate Change (IPCC) – the apex UN body on climate change – have painted a grim picture of an impending climate crisis caused due to the constant rise in temperature.

The pact is designed to keep global temperatures from rising more than 2 degrees Celsius above pre-industrial levels in this century, and if possible, to limit the increase to 1.5°C.
However, many scientists estimate that taken together, they are wholly inadequate to meet stated temperature goals focused on average global temperature increases of 2 degrees Celsius and 1.5°C unless all the big economies work on war footing to reduce their emissions drastically.

A special UN report released in October last year, had warned about the serious consequences of temperature rise breaching the threshold of 1.5ºC in the form of prolonged droughts followed by incessant rain that in turn will lead to floods, increased frequency and severity of cyclones. This will also cause melting of glaciers and a sharp rise in the sea level threatening the existence of coastal towns and cities.

Just before the commencement of Madrid conference, a report by UN Environment Programme (UNEP) had warned that unless global greenhouse gas emissions fall by 7.6 per cent each year between 2020 and 2030, the world will “miss the opportunity” to get on track towards the 1.5°C temperature goal of the Paris Agreement. In simple terms, this means that the top economies of the world have failed to contain their carbon emissions by heavily relying on polluting fossil fuels to meet their energy requirement.

“Our collective failure to act early and hard on climate change means we now must deliver deep cuts to emissions – over 7 per cent each year, if we break it down evenly over the next decade,” said Inger Andersen, UNEP’s Executive Director while releasing the report last week. “This shows that countries simply cannot wait until the end of 2020, when new climate commitments are due, to step up action. They – and every city, region, business and individual – need to act now.” CoP-25 is now being held at Madrid, Spain since Chile expressed inability to hold the summit due to internal unrest.

Despite the warning of UNEP, it is a fact that emissions are still on rise. The World Meteorological Organisation (WMO) this week reported that CO2 levels in the atmosphere breached all records in 2018. The report says that the “globally averaged concentrations” of carbon dioxide has broken the record of last 3-5 million years. Such a concentrations of CO2 in atmosphere is caused by combustion of fossil fuels. It casts a bleak scenario for the posterity.

Last year, a special report (SR 1.5) of IPCC had clearly said that world has only 10 years’ time left to avert the disaster and countries will have to cut the net anthropogenic CO2 emissions by 45 per cent over the 2010 levels by 2030, and reach net zero by 2050.

However, this appears to be an impossible target considering the massive carbon footprint of big polluters of the West. The US administration of President Donald Trump, which has announced the intention to withdraw from the Paris agreement, openly advocates for burning of fossil fuels and protection of oil and gas companies.

India is already witnessing the increased impact of erratic and extreme weather events. This year, first the country was hit by a prolonged drought with strong heat waves causing a severe water crisis. Then, parts of the country were engulfed in massive floods. Such events cause serious damage to agriculture and economy besides causing the loss of life and property.

The complex geography of India – with the presence of almost ten thousand big and small glaciers, a 7500 km long coast line and several agro-climatic zones - makes it more vulnerable to the impact of climate change. The fact that more than 50% of India’s agriculture is still dependent on rain comes at the heavy expense of the rural economy and farmers, who are bearing the brunt of the unpredictable rain patterns.

If we look at the east coast, it is perpetually hit by cyclones that have witnessed an incredible rise in its frequency. The devastation caused by “Bulbul” is a recent example. While India has improved its disaster management ability, the increasing frequency of natural disasters is putting strain on the economy and draining crucial resources.

Experts say that with the rise of sea temperature, India’s west coast – which is less hit by cyclones until now in comparison to the east - will also suffer as many cyclones causing massive devastation along the densely populated coastal line. 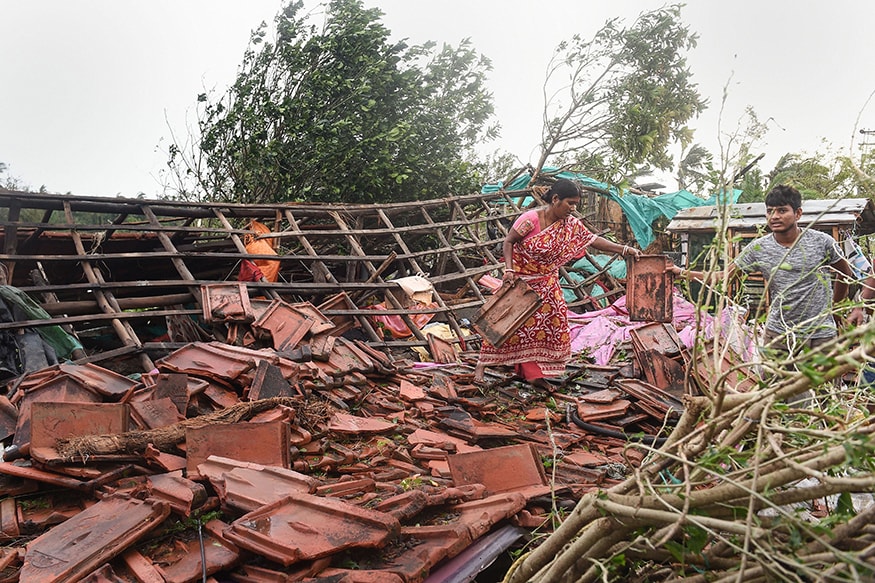 A woman stands on the remnants of her house in the aftermath of cyclone 'Bulbul', at Bakkhali, in South 24 Parganas district of West Bengal. (Image: PTI)

In this context, India’s participation at the UN climate change summit gains deep significance for its future course of action.

Interestingly, the Madrid conference also focuses on the Warsaw International Mechanism for “Loss and Damage associated with Climate Change Impacts (WIM)” and Climate Finance among other issues. These matters are particularly important for the Least Developed Countries (LDCs) that are most vulnerable to climate change. Therefore, India’s role will be watched closely in this summit.

While India will join hands with China and other developing nations in Madrid to put pressure on United States, the European Union and other developed countries to play bigger role in averting a climate disaster, it will also be held accountable for its own contribution.

More than 50% of carbon emission is caused by just four countries including China, US, India and Russia.

Although India has been arguing that its per capita carbon emissions are far less than any of these countries, it is still the fourth largest carbon emitter in the world after China, US and EU. In the face of the extraordinary challenges and climate adversity, a vulnerable country like India cannot hide behind the “per-capita” excuse.

It must think beyond the conventional lines and act seriously to deal with the crisis. This entails a multipronged approach of change in strategy in different sectors.

So, while New Delhi explains to the world, the compulsion of using coal to alleviate poverty and provide a dignified lifestyle to its poor, it must also brace for the tough and innovative steps at home.

For instance, India should promote the organic farming at high scale and its employment generation should focus around environmental conservation and sustainable tourism. Also, besides solar and wind energy promotion, India must also aim to promote micro hydel projects rather than building humongous hydropower dams which often cause irreparable destruction of rivers and forests.

India should also join hands with neighbouring countries like Bangladesh, Nepal, Pakistan and Sri Lanka to build a joint mechanism to fight “natural” disasters to minimise the loss to its resources and GDP.

This is important because at present, our economy is hit by several reasons and there is no quick recovery in sight. Country’s growth and employment opportunities are bound to remain under high stress for some time. Clearly, it cannot suffer any further dent on its economy due to environmental damage.
Tags