As India Waits for Reprieve from Sweltering Heat, Gujarat and Maharashtra Brace for Cyclone Vayu

The IMD has issued a warning of heavy rains with winds blowing at the speed of over 110 kms on June 13 and 14 in coastal areas of Saurashtra and Kutch. (AP)

Large swathes of the country seared under record high temperatures on Monday with the mercury touching 48 degrees Celsius in Delhi.

Ahmedabad/New Delhi: Even as the entire India is reeling under heatwave, the Saurashtra Peninsula of Gujarat and Maharashtra are all geared up for a cyclonic storm that may hit the region on Tuesday.

In its latest weather bulletin for "pre-cyclonic watch for Gujarat coast", the India Meteorological Department said, "A depression in Arabian Sea is very likely to intensify into a cyclonic storm during next 24 hours and into a severe cyclonic storm in subsequent 24 hours."

The IMD further said that the storm may move north-northwestwards during next 72 hours. "It is very likely to cause adverse impact in terms of wind and rainfall over Saurashtra and Kutch mainly on 13 and 14 June," the bulletin read.

After the cyclonic alert, the state government alerted all departments concerned and coastal district collectors. An official said that a total of 10 NDRF teams (five from Pune and five from Bhatinda) have been called to Gujarat.

"We have alerted various rescue agencies, including the NDRF, SDRF, Army and Coast Guard, in the state. We will deploy NDRF teams on Tuesday on coastal parts of Saurashtra and Kutch. Precautionary measures are being taken by all the departments concerned. Most of the fishing boats have returned at coast but we are contacting those on the remaining one and asking them to come back soon," Pankaj Kumar, Additional Chief Secretary (Revenue), Gujarat government.

In the neighbouring state of Maharashtra, the monsoon is expected to arrive in Konkan and Mumbai regions during this period.

"Thunderstorm accompanied by lightning and gusty winds speed, reaching 30-40 kmph, likely to occur at isolated places in the districts of Greater Mumbai in the next four hour," Mumbai IMD said.

Mumbai airport PRO said that flight operations have been put on hold as visibility has gone down due to heavy rains. "United Airlines Newark to Mumbai flight has been diverted to Delhi," he added. 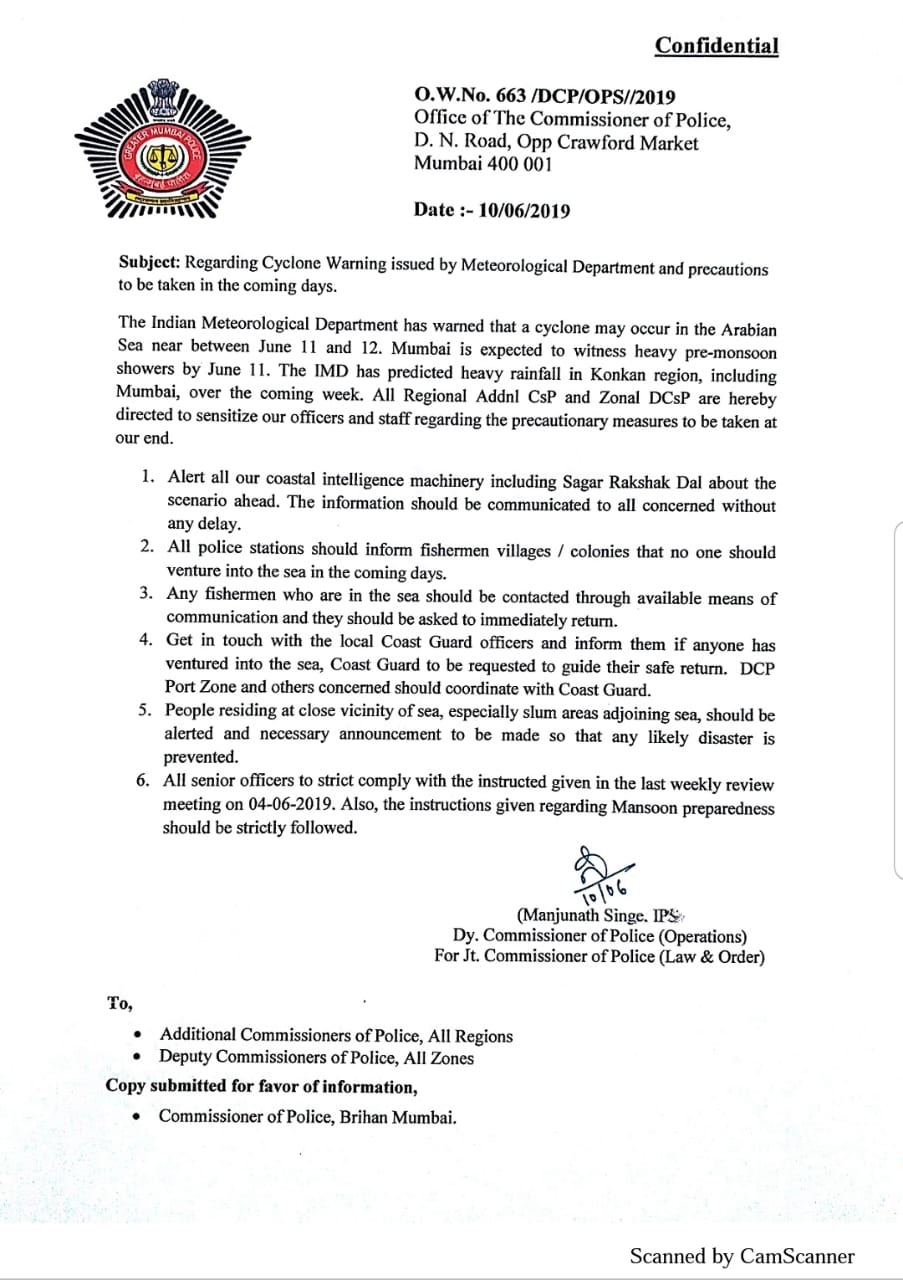 The cyclone, while not hitting the state, is likely to result in gusty winds and a turbulent sea, Meteorological Department officials said, adding that fishermen were advised not to venture into the sea.

The Maharashtra government has also asked farmers not to rush into sowing as the onset of the south west monsoon has been delayed.

However, the Monsoon unlikely to make an entry in West Bengal soon, the Met department said. It said that heat wave condition is "very likely" to prevail over Purulia, Bankura, West Burdwan, Birbhum, West Midnapore and Jhargram districts of West Bengal during the next three days.

In Odisha, coastal and interior areas reeled under unbearable weather conditions due to rising temperature coupled with high level of relative humidity. Hirakud in western Odisha turned out to be the hottest place in the state recording 44.8 degree Celsius followed by 44.6 degree in neighbouring Sambalpur, officials said.

Large swathes of the country seared under record high temperatures on Monday with the mercury touching 48 degrees Celsius in Delhi, the highest for June, and hovering around the 50-degree Celsius mark in many other areas in north India.

There was no immediate respite in sight as the monsoon advanced slowly in southern and northeastern India and the weather department forecast that heatwave conditions were likely to prevail in north and western India for a couple of days more.

Delhi recorded its highest-ever June temperature at 48 degrees Celsius. The city's previous high of 47.8 degrees Celsius was recorded in Palam on June 9, 2014. "The factors that led to this are dry westerly winds, no effect of a western disturbance in the plains and intense heating in the month of June," said IMD regional weather forecasting chief Kuldeep Srivastava.

In Punjab and Haryana, many areas reeled under a high of over 45 degrees Celsius. Narnaul, with a maximum of 48.3 degrees Celsius, was the hottest place in the two neighbouring states that were under the grip of a severe heatwave.

In Uttar Pradesh, Banda was the hottest place with a maximum of 49.2 degrees Celsius. People in Allahabad and Jhansi to sweltered under highs of 48.9 and 48.1 degrees Celsius, respectively.

Severe heatwave conditions persisted in the desert state of Rajasthan. Maximum temperature in most of the cities was recorded above 45 degrees Celsius -- 47.4 in Bikaner, 47.3 in Kota and 46.3 in Jaipur, according to weather department officials in Jaipur.

Jammu recorded the hottest day of the season with a maximum temperature of 44.4 degrees Celsius. The prevailing heatwave conditions intensified power and water woes in different parts of the region in Jammu and Kashmir. The mercury in Srinagar too rose and settled at 29.2 degrees Celsius, 1.2 notches above normal.

According to an IMD bulletin, "Heatwave to severe heatwave conditions (are) very likely to prevail over Rajasthan, Madhya Pradesh, Vidarbha, southern parts of Haryana and Uttar Pradesh during next 2 days. Intensity and spatial extent of heating is very likely to reduce substantially thereafter."