This is not the first time that INLD and BSP are coming together. The two parties have earlier too formed an alliance with good outcomes during the 1998 Lok Sabha elections.

Around 48 hours later, the Delhi High Court overturned the acquittal of 20 people in the 2010 Dalit killing case in Mirchpur, serving brutal reminder of the unabated caste-based riots. The verdict also concluded that, “the damage and destruction that is evidenced from the record is widespread and, in the opinion of this Court, could not have been carried by a small group of Jat youth as is speculated by the trial Court. There is no doubt that it was indeed a mob which made a coordinated and premeditated attack on the Balmiki basti.”

Balmikis are a sub-caste in the Dalit community.

News18 travelled to Mirchpur to find out how ground realities have panned out in the last eight years and whether the political alliance between BSP and INLD before polls will play any role in bringing the two communities, who have traditionally locked horns, closer.

“I may vote for ‘Behenji’ (Mayawati) but we can never forget what happened in 2010. It has destroyed our lives forever. Jats and we will always remain enemies no matter what happens in the political circle,” said 60-year-old Veerbhan, a resident of Mirchpur who belongs to the Balmiki community.

Veerbhan’s house was right next to the one that was burned down by the more dominant Jats in the same village.

On April 21, 2010, 18 Dalit houses were attacked by the Jats in Mirchpur after an altercation over a barking dog. Following this, 254 Dalit families had to flee in search for safe shelter. After months of being homeless, most of them settled on a patch of land on the outskirts of Hisar, loaned to them by a social activist. They have been living there ever since. Only 40 families, who could not afford to lose their village livelihood, went back to Mirchpur. They, too, are planning to leave as soon as possible.

Seventy-year-old Tara Chand and his disabled teenage daughter, Suman, lost their lives in the blaze. Before the verdict on Friday, 15 people were convicted and 82 acquitted by a Sessions Court in 2011.

Not much has changed since then. The caste-divide is blaringly visible just as one enters the village. A slushy bylane, a breeding ground for mosquitoes and over-run by sewage, referred to as ‘Laxman Rekha’ by the villagers, is what divides Jat and Dalit occupancies in the village. The 40 Dalit families reside on the murkier side of the ‘rekha’. The slushy bylane which divides Jat and Dalit homes in Mirchpur. The villagers refer to this sewage-ravaged lane as ‘Laxman Rekha’. (Rounak Kumar Gunjan/News18.com)

“Mayawati is our representative. We will stick to her in terms of our electoral preference because she will help us. Her joining hands with the Jat leader is a political choice that will not change what we were subjected to by the Jats,” added Veerbhan.

The 2010 incident has left its indelible mark in the way Dalits earn a living as well. Traditionally an agrarian community, Jats own sizeable land for farming but do not employ the Balmikis as labour.

“We need to travel to other districts like Jind and Sonepat for work. We are not provided employment here. Moreover, we are mercilessly beaten if we are spotted anywhere near their fields. The scale of violence may have come down, but it is a regular,” said Baburam, another resident of Mirchpur.

The villager informed that last year, in what is still considered an unsettled dispute, a Dalit teenager, Shiv Kumar, was beaten and abused by Jat boys for winning village athletic races. His father, Ajmer Singh, says, “Due to the favourable judgment in the 2010 case, this time things didn’t go out of hand.”

The villagers informed of several cases where they were cat-called as thieves and ridiculed in public for their caste. However, the villagers are aware that the two parties coming together is a move to widen voter base.

The tie-up with BSP, steered by the INLD, with an eye to consolidate Dalit voters in the state is being seen as the party’s last-ditch attempt to grasp power in the state after a decade-and-a-half of being sidelined. The Balmikis account for about 19 percent of the Scheduled Caste votes.

“There are about 40 Assembly seats (out of total 90) where the BSP holds a vote share between 7 percent and 8 percent. And there are about 60 Assembly seats where the INLD has a vote share of about 30 percent. Thus, the INLD and the BSP alliance can easily reap about 39 to 40 percent votes in the state and get a clear majority in the Assembly,” INLD leader and Chautala’s younger son Abhay Singh had said in a press conference last month.

This is not the first time that INLD and BSP are coming together. The two parties have earlier too formed an alliance with good outcomes during the 1998 Lok Sabha elections. The INLD, which was known as Haryana Lok Dal (Rashtriya) in 1998, won four of the seven Lok Sabha seats it contested in Haryana, while the BSP won Ambala (Reserved) seat out of the three it contested. The INLD won Sirsa (Reserved) seat, Kurukshetra, Sonepat and Hisar Lok Sabha seats in alliance with the BSP.

The confluence makes more political sense because the INLD, known as a Jat-centric party, having strong base in the rural constituencies, has traditionally done well in 17 Assembly seats reserved for Scheduled Caste candidates in Haryana. The party won 13 Reserved seats in 2000 Assembly polls when it came to power. It won six seats (out of total nine it won in the 2005 poll drubbing) and got nine seats (out of 31 it won) in 2009.

Ahead of the polls, both parties have also started their vote consolidation process.

“Party leaders have instructed us to work together. We are going to villages and holding Jat and Dalit meetings. What happened in Mirchpur was unfortunate but needs to bury past differences and move ahead,” said Rajendra Littani, district president for INLD in Hisar.

Meanwhile, on the other side of the caste-based border in the village, a cleaner and relatively more prosperous Jat occupancy is in complete denial of any atrocity initiated by them on anybody.

Most of the Jat houses in the village has had men arrested, accused or convicted for the 2010 attack.

Vajir Singh, a farmer by profession and an accused in the case, told News18, “The Dalits get their way but no one listens to us. They have power as they have more votes than Jats. Now, with INLD joining hands with them, they will be heard more if they win.”

The Jat community in the village is not particularly happy with the alliance.

Vajir’s neighbour, 53-year-old Chandra Prakash, who has had to visit the local police station several times on allegations of being involved in the caste-based riot said, “Chautala is giving in to political greed. How will he help us if he listens to Mayawati? There is conflict of interest here.

Their anger over restoring the SC/ST Act is also likely to heavily influence their electoral choice.

“The BJP brought the Act back and Chautala is allying with Mayawati. We have just one option left,” added Prakash, his electoral inclination towards the Congress clear.

On the other hand, 60 km away, the struggle for 200 Dalit families who had fled from the village in 2010 has been long and grinding. Despite having their own homes in Mirchpur, they have had to spend eight years living under trampolines and make-shift shanties on the outskirts of Hisar. The long-stretched everyday struggle is slowly changing their caste-based electoral preference to a need-based one.

The only contention that can divide Dalit votes in Haryana for Mayawati is the need for homes.

“While we hope that ‘Behenji’ (Mayawati) will get us out of here, our votes will surely go to BJP if they construct our houses and rehabilitate us. The chief minister has already inaugurated the area and the stone-laying ceremony has been done with,” said Oma Bhagat, originally a resident of Mirchpur, now living in a shanty. 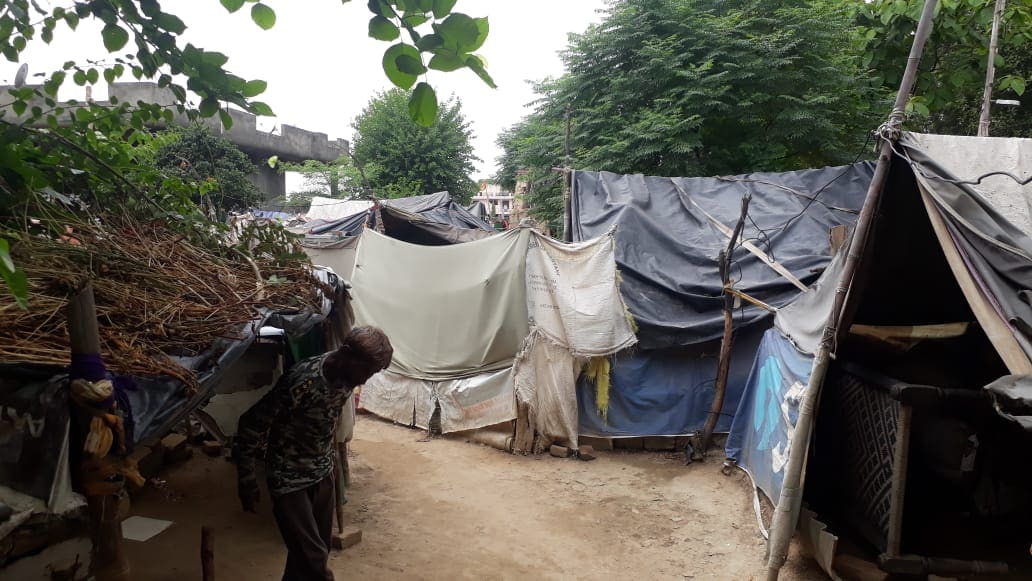 Despite having their own homes in Mirchpur, those affected by the 2010 violence have had to spend eight years living under trampolines and make-shift shanties on the outskirts of Hisar. (Rounak Kumar Gunjan/News18.com)

The 200 Dalit families live on a patch of land generously loaned to them by social activist Ved Pal Tanwar. There are no pucca houses, the patch of land has bamboos to support the material used to make rain-coats with, used as ceilings here. For doors, the families have old, worn-out sarees, cow dung and coal for fire. There is only one fridge in the ‘basti’.

“Living in hell is better than this,” exclaims Bhagat.

The inhabitants have pinned their hope to the state’s plan to rehabilitate them in the newly carved town Deen Dayal Puram in Dhandur village adjoining Hisar town.

Chief Minister Manohar Lal Khattar had on July 7 laid the foundation stone of the township project which will come up on around 8 acres along the Sirsa road. The state government would spend Rs 4.56 crore to lay down the infrastructure and civic facilities in the proposed township.

If there is anything that can hurt the ‘rakhi’ bond, it is the BJP constructing homes.