Everything from the outer walls to the terrace of the building, popular known as Annexie, is being painted in saffron shade. Inside the CM's office, the towel that covers Yogi's chair and the tablecloth is also saffron.

Everything from the outer walls to the terrace of the building, popular known as Annexie, is being painted in saffron shade. Inside the CM's office, the towel that covers Yogi's chair and the tablecloth is also saffron.

Lucknow: Ever since a saffron-clad Yogi Adityanath took over as the chief minister of Uttar Pradesh, the colour has become a defining feature in the state. It has permeated everything from booklets to towels and even buses.

Continuing with the spell, it is now the turn of the Lal Bahadur Shashtri Bhawan, which houses the chief minister’s office, to get a saffron hue. Everything from the outer walls to the terrace of the building, popular known as Annexe, is being painted in the ochre shade.

It is on the fifth floor of this building where Yogi Adityanath sits. Inside, the towel that covers the CM’s chair and the tablecloth is also saffron.

The office of the chief secretary and several other senior bureaucrats is also in the building. For years now, the building had a white coating. While successive governments showed their own colour bias in government books and functions, the Shashtri Bhavan was spared. 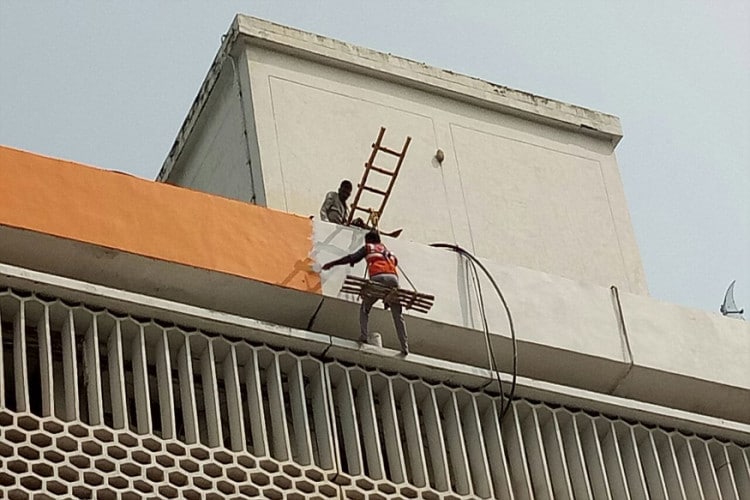 Talking to reporters about the decision to re-paint the building, state property officer Yogesh Shukla said “several colours were considered but saffron was chosen as the best”.

Taking a jibe at the Yogi government's “colour spree”, Congress spokesperson Amarnath Agarwal said, “No colour is bad, but painting the seat of governance in saffron is nothing but a subtle attempt at saffronisation of the bureaucracy.”

Besides this, the education department had distributed saffron school bags in government primary schools, to replace the ones that featured former CM Akhilesh Yadav’s photograph.

Booklets that were distributed to mark 100 days and six months of the Adityanath government were saffron in colour as well. The information diary of the state government, which contains details of various officials, is also saffron.