A cheetah after being released inside a special enclosure of the Kuno National Park in Madhya Pradesh on September 17. (Image: PIB/PTI)

The government has so far received over 1,900 submissions from people across India for naming each of the eight cheetahs brought all the way from Namibia on September 17

Asoka, Shaurya, Chirayu, Simba, Agamya, Gargi — Nearly a fortnight after eight African Cheetahs were translocated from Namibia to Madhya Pradesh’s Kuno National Park, the government is flooded with suggestions from people across states for re-naming the elusive wild cats.

The eight cheetahs — three males and five females — are named Tbilisi, Sasha, Savannah, Siyaya, Freddie, Elton, and Oban by the Namibia-based Cheetah Conservation Fund that co-ordinated the entire mission with the Indian team. One female cheetah was named Aasha at the suggestion of Prime Minister Narendra Modi after he soft-released them into the wild on his birthday on September 17.

As the eight felines take their time to acclimatize to a new habitat far away from their native land, a nationwide contest is now underway on the government’s digital platform — MyGov — seeking new names for the animals. The contest opened by PM Modi during his Mann Ki Baat programme on September 25 has garnered over 1,900 suggestions within just five days. 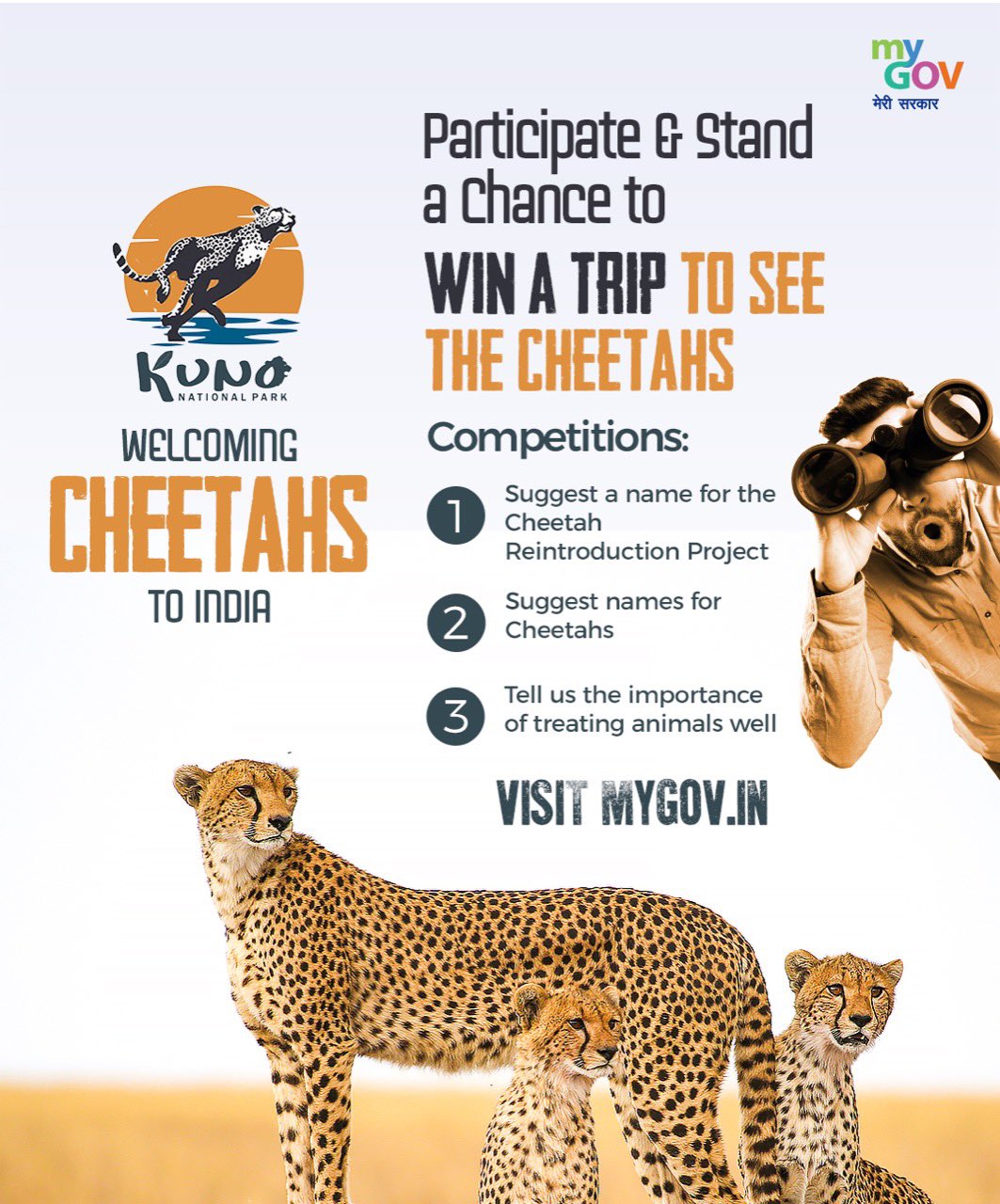 “Can we think of naming each Cheetah individually? It would be better if this naming is in tune with our traditions. Anything associated with our society, culture, traditions, and heritage attracts us. Who knows, as a reward, you may become the first to witness the cheetahs,” the prime minister said as he appealed to people to participate in the contest which is open till October 26.

From King Asoka to Milkha

While it is still a long time before anyone can get a glimpse of the elusive wild cat, the eagerness to get an opportunity to see the cheetahs is palpable. From names of kings and emperors who ruled India in the past to characters from Indian mythology, including Mahabharata, the contest has sparked the imagination of many.

Symbolic of their strength and regal demeanour, lots of suggestions are inspired by the names of kings and freedom fighters — from Asoka, Chandragupta, Prithviraj, Lakshmi (Bai) to Vikramaditya. Some are smitten by their blazing fast speed and suggested names like Milkha (India’s fast sprinter Milkha Singh), Raftaar, Toofan, Tejas, Shaurya, Chetak (Chhatrapati Shivaji’s horse), Rudra, and Vidyut, while others want them to be named after India’s seven sacred rivers, including Ganga and Kaveri.

For the youngest lot – aged two to three years old – the names Simba and Bagheera appear frequently. Then there are a host of names inspired from Indian mythology — Indrani, Arjun, Luxmi, Parth, and Shakti.

Though the names would barely make any difference to the wild cheetahs as they gear up to prowl the open forests of Kuno and hunt for prey, the entire exercise would help drum up enthusiasm for the ambitious wildlife project. According to officials, the idea is to allow people to become a part of the project and let them connect with the newly brought in cheetahs who are entering the Indian ecosystem after 70 years. Technically, the eight cheetahs being reintroduced belong to another sub-species — different from the Asiatic Cheetah that India once had before they became extinct in the 1950s.

Talking to News18, Dr YV Jhala, chief scientist for Project Cheetah and Dean of Wildlife Institute of India (WII), said though it may help kindle interest and enthusiasm among people about the entire initiative, it is not encouraged to give names to wild animals because then there is a concern that people can start generalising them as pets, which is not right. “They all are radio-tagged for surveillance and if required, they can be numbered accordingly for identification purposes,” he added.

Currently, all eight wild cats are quarantined in small enclosures, allowing them time to adapt to the new environment. “The project will take its own course, and we must give time to these animals. They are still very naïve to the Indian ecosystem and it is important to ensure that we protect them from any disease risk. They will remain in their enclosures for a month at least,” said the senior wildlife scientist.

The eight cheetahs were translocated from Namibia on September 17 in a 24-hour transcontinental journey in a jumbo jet especially modified for the purpose, followed by a 30-minute helicopter journey to Kuno. The goal is to once again establish a successful breeding population of the wild cat in India which, according to the government, will also help restore open forests and grasslands.