Atal Bihari Vajpayee passes away: Former prime minister Atal Bihari Vajpayee passed away at AIIMS in Delhi at 5.05pm on Thursday. He was 93. In a medical bulletin, the hospital said his condition deteriorated over the last 36 hours and he was put on life support systems. "Despite the best of efforts, we lost him today.” The Bharatiya Janata Party stalwart was admitted to the All India Institute of Medical Sciences (AIIMS) in New Delhi on June 11 with a kidney tract infection, urinary tract infection, low urine output and chest congestion. Prime Minister Narendra Modi, BJP chief Amit Shah, party veteran LK Advani, Sonia Gandhi, Rahul Gandhi, Mamata Banerjee, Venkaiah Naidu, several union ministers and CMs and even former Pakistan President Pervez Musharaff mourned his death and several of them are at his residence to pay last respects.

Vajpayee's mortal remains have been taken to his residence and hundreds of well wishers have gathered there. The mortal remains will be taken to the BJP headquarters at 9am on Friday and the samadhi will be done at Vijay Ghat, near Rajghat, at 4pm. The government also announced seven-day state mourning as a mark of respect for the former prime minister. In a circular, the home ministry also said national flag would be flown at half mast from today for seven days across India and a state funeral would be accorded to Vajpayee. Several state governments have also announced a holiday in schools, colleges and government offices Friday. Senior RSS leader Madan Das Devi said Atal ji always wanted that people should not break rules or violate laws but the circumstances were such that it was not possible to implement his suggestions.

The final procession of former prime minister Atal Bihari Vajpayee will take place on Friday. Before the journey, his mortal remains will be kept at the Bharatiya Janata Party (BJP) headquarters for people to pay their last respects. Keeping in mind the movement, the Delhi Police on Thursday issued a traffic advisory for the national capital. Before the final journey, the BJP stalwart's mortal remains will be kept at the party headquarters for people to pay their last respects. During the period of state mourning, the national flag will fly at half-mast on all buildings throughout the country where it is flown regularly and there will be no official entertainment.

Member of Parliament Rajeev Chandrasekhar, who earlier owned BPL mobile service company, said that Vajpayee was responsible for opening up the telecom sector and giving policy impetus to expand telecommunication sector in the country. Chandrasekhar said the telecom policy of 1999 released by the NDA government under Vajpayee paved the way for structural reforms in the sector, leading to unprecedented growth of mobile subscribers, introduction of fierce competition into the mobile telephony sector, and deep-rooted reforms in the regulatory regime, which was followed up by the amendment of the TRAI Act in 1999.

Father of Modern Telecom in India | Telecom industry leaders today termed former prime minister Atal Bihari Vajpayee, who passed away at the age of 93, as father of modern telecommunication in the country.  Bharti Enterprise Chairman and founder of Bharti Airtel Sunil Bharti Mittal said he was a great economic reformer and can truly be called father of modern telecommunication in the country, having ushered in the National Telecom Policy in 1999, which "helped the industry overcome some of its toughest early challenges".

Former prime minister Atal Bihari Vajpayee would always listen to his alliance partners as that was his style of working, Trinamool Congress chief Mamata Banerjee recalled today after paying tribute to the BJP stalwart. Banerjee, who flew to Delhi from Kolkata this evening, spent an hour at Vajpayee's residence to pay her last respects to the leader, under whom she had served as a Union minister. "We have worked together. We supported his government from outside. He worked with all. It was his style of working. He always listened to us. Nitishji, Jayalalithaaji, Navinji -- we were all together. There was no difference among us," she said. Banerjee said she could not control her emotions when she visited the "great leader" in 2011 after she became the chief minister of West Bengal. Vajpayee had one goal to deliver to his political fraternity. He wanted to ensure that he achieved the record of being the first BJP PM to complete five years.

Leaders Arrive at Vajpayee's Residence| Leaders from across the political spectrum are headed towards Vajpayee's Delhi residence to pay last tributes. Ghulam Nabi Azad, Ashok Gehlot, Uddhav Thackeray, among others were seen at late Vajpayee's residence. His mortal remains will be taken to BJP headquarters tomorrow morning.

#Mumbai: Lights of Chhatrapati Shivaji Maharaj Terminus railway station (CMST) to remain off today as a mark of respect to the departed soul of former PM #AtalBihariVajpayee. pic.twitter.com/lmO0t1vykv

Pakistan remembers Vajpayee for his efforts for better Indo-Pak relations. Whatever Vajpayee did, he remained at ease, be it managing political affairs in New Delhi or slipping into his poetry in his bungalow in the lap of the Himalayas in Manali. I pay tribute to him. The country has lost the tallest leader. He was a tree under whose shade many found refuge: Union Minister Ram Vilas Paswan #AtalBihariVajpayee pic.twitter.com/7txs1rjQhd

Sonia Gandhi arrives at Vajpayee's Residence | Sonia Gandhi has also reached late Atal Bihari Vajpayee's Delhi residence to pay tributes to the deceased. earlier, she had expressed codolences over Vajpayee's demise. She remembered him as a "tall figure" in India's politics. New Delhi: On 11 May in 1998, the then Prime Minister of India Atal Bihari Vajpayee took a step that changed the way India was to engage with the world in the future.

On behalf of Govt&people of Bangladesh & on my own behalf, I express our heartfelt sympathy & condolences to Govt & the mourning people of India, and to the members of the bereaved family. We pray for the eternal peace of his soul: Bangladesh PM Sheikh Hasina: Bangladesh PM pic.twitter.com/zla0VuaJmj

Manmohan Singh Offers Condolences | Former prime minister Manmohan Singh has offered condolences to the family of Atal Bihari Vajpayee over his demise. In a letter to Vajpayee's daughter, Manmohan  remembered him one of the greatest leaders of India. ALSO READ | For Peace, Vajpayee Was Ready to Talk to Man Behind Kargil War 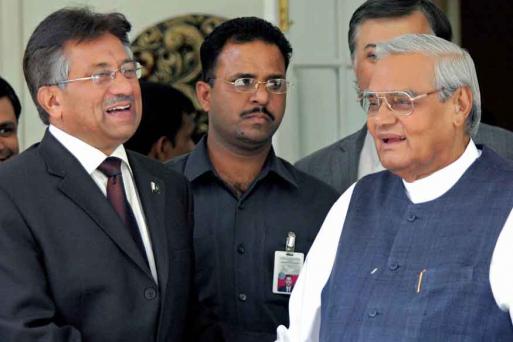 Some hope was revived when Prime Minister Narendra Modi made a surprise stopover in Lahore to meet his then counterpart Nawaz Sharif. But since then, multiple terror attacks and military confrontations have led to worsening relations.

Remembering Vajpayee | A portrait of India's first prime minister Jawaharlal Nehru had once gone missing from the South Block in the late 70s, but it was restored following the intervention of the then foreign minister, Atal Bihari Vaypayee.Vajpayee had shared this anecdote in a speech in Parliament and also praised Nehru for his ability to take criticism from others. "Friends in Congress may not believe this, but a portrait of Nehru would hang in South Block. I would see it whenever I passed by," he had said in his speech. Vajpayee also said that there used to be sparring with Nehruji in Parliament. "At that time, I was new, and would sit back in the House. Sometime to get an opportunity to speak, I also would have to stage a walk out," he had recalled. "Then I made a place for myself, and moved ahead. And, when I became the foreign minister, I saw that the portrait was missing from the gallery," he said. Vajpayee, who died at the AIIMS today after prolonged illness, was the foreign minister from March 1977 to July 1979 in the Morarji Desai government.

His demise has marked the end of an era. In Atal ji's passing away, it is as if I have lost my father. It's a void which can never be filled: PM Narendra Modi #AtalBihariVajpayee pic.twitter.com/Q9vcnD5psW


Prime minister Narendra Modi remembers late Atal Bihari Vajpayee as a "fatherly figure". He said that hisVajpayee's demise has left a void. "Vajpayee ji popularised the idea of Jan Sangh and BJP," he said. "His values will always be remembered and will continue to inspire us"  Modi said while paying tributes to Vajpayee. #WATCH live from the residence of former PM #AtalBihariVajpayee in Delhi. https://t.co/pUxKBRM1zz

Pakistan has expressed grief over the demise of former prime minister Atal Bihari Vajpayee. "We have learnt with sadness the passing away of Mr. Atal Bihari Vajpayee," a statement by Pakistan's Ministry of Foreign Affairs said. It said that Vajpayee contributed in bringing change in the relations between India and Pakistan and remained a key supporter of SAARC and regional cooperation for development.

A large crowd of mediapersons and others has gathered outside AIIMS, affecting movement of traffic on the road. Traffic Policemen have been deployed to manage the crowd and traffic outside the hospital. The roads leading to Krishna Menon Marg have been blocked. Roads leading to Atal Bihari Vajpayee’s home have also been sealed.

The 1924-born leader is under the supervision of Dr Randeep Guleria, a pulmonologist and currently the Director of AIIMS. Guleria has served as personal physician to Vajpayee for over three decades. Union Home Minister Rajnath Singh and Amit Shah had also visited Vajpayee on Saturday.

Atal Bihari Vajpayee was the Prime Minister briefly in 1996 and then from 1998 to 2004 but had retreated from active politics over the last decade due to failing health. Born in 1924, he entered politics during the Quit India movement in 1942. Vajpayee was elected to Lok Sabha from Lucknow in 1991, 1996, 1998, 1999 and 2004. Vajpayee was also the first external affairs minister to deliver a speech in the UN General Assembly in Hindi.