The founder-president of Bajrang Dal, Vinay Katiyar, has said that he, along with others, was not involved in any conspiracy to demolish the structure. "There were lakhs of kar sewaks and they were not listening to anybody. Therefore, to say that anyone hatched the conspiracy is wrong."

"It was a matter of faith for lakhs of Karsewaks. They brought the structure down and then even took away the bricks. It's wrong to say we are playing politics," he said. Katiyar said he was even ready to be hung to see a grand temple in Ayodhya. "If Yogi meets us and goes to Ayodhya, it's not politics, it's faith."

Congress spokesperson Randeep Surjewala says they believe in justice, and after 25 years, those guilty will be punished.  Asking Union Minister Uma Bharti to step down from the post, he said: "Hope PM Modi will intervene in the matter, and ask Uma Bharti to resign."

CLICK TO READ | Will Temple Politics be the Big Electoral Agenda in 2019? 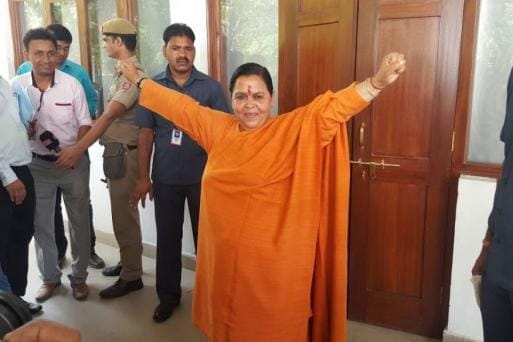 He, however, added that 'we will have to see if UP government fully cooperates with the CBI as far as production of witnesses in the case is concerned'.

CLICK TO READ | Babri Masjid Case: What the BJP Stalwarts Have Been Charged With Charges have been framed by the special CBI court in the Babri Masjid demolition charge. LK Advani, MM Joshi, Uma Bharti and others charged under IPC section 120B (Punishment of criminal conspiracy) read with 153 (Promoting enmity between different groups on grounds of religion, race, place of birth, residence, language, etc., and doing acts prejudicial to maintenance of harmony), 153A, 295 (Injuring or defiling place of worship with intent to insult the religion of any class), 295A and 505 (Statements conducing to public mischief)

"The discharge application has been rejected by the trial court. This was expected as the case happened on the directions of the Supreme Court, we will also move the High Court," says Akhilesh Awasthi "These are big people, they are RSS and BJP people... But we respect what the court has said," says Samajwadi Party leader, Azam Khan

"They had been called for framing charges. Bail being granted was expected. In such cases no one is sent behind bar,"  says Zafaryab Jilani, Convenor of Babari Masjid Action committee

We have submitted discharge application, if Court rejects it, then charges will be framed: Prashant Atal, lawyer of accused #Babri pic.twitter.com/ESlVj7PJbX

"There is nothing in the case. No masjid was demolished as there was no masjid. I see no reason for Uma Bharti ji to resign," says Subamaniam Swamy

Signatures have been given by accused, process to frame charges in Babri Masjid demolition case at the CBI special court in Lucknow yet to begin

"There are so many crimes that have happened even from before 1992 that are still pending. I will request the Supreme Court to have daily hearing for other cases as well," says Sakshi Maharaj. "This is a wastage of time, nothing has happened since 1992. The speed they are moving things in the case. I hope that construction of the temple will also happen at a similar speed." The CBI special court had summoned them after a Supreme Court ordered prosecution of the senior leaders for criminal conspiracy.

CLICK TO READ | Babri Masjid Case: A Look at the Controversy That Started in 1885 Senior BJP leaders LK Advani and Murli Manohar Joshi and Union minister Uma Bharti will be appearing before a special CBI court in Lucknow on Tuesday to hear framing of charges against them in the Babri Masjid demolition case.

Earlier in the day, senior Hindutva leader Ram Vilas Vedanti, said that he was among those who had pulled down the structure in Ayodhya. "I was one of those who had pulled down the dome of the disputed structure in Ayodhya." Meanwhile, another accused, Sakshi Maharaj said, "The Babri Masjid versus Ram temple debate should be dropped now. Those who had opposed the construction of the temple are Ram bhakts now. The Muslim community too is in favour of a temple being built in Ayodhya."

LK Advani and other leaders reach CBI special court. Meanwhile, lawyer Akhilesh Awasthi says, "It is a routine practice, the accused will sign and come back. Nothing historic will happen today."

CLICK TO READ | Is Babri Demolition Case the Undoing of Advani's Presidential Dream? The SC on Wednesday gave it's go ahead to the CBI to frame charges against top BJP leaders including Advani and Dr MM Joshi in the criminal conspiracy case leading to the demolition of the structure in 6th December, 1992.

Special CBI court convenes. Counsels and judges to now start proceedings to frame charges in Babri Masjid demolition case. Meanwhile, the meeting between Yogi Adityanath and BJP leaders is still ongoing at the VVIP guesthouse. A team of lawyers also present in the meeting.

"They (BJP leaders) are innocent. They will come out clean. The opposition always has some falsehood to say. I am sure the conspiracy will not stand," says Venkaiah Naidu

"I feel lucky to be convicted for the noble work I have done for the construction of Ram Temple. Nobody in this world can stop the Ram Temple from being constructed," says Sakshi Maharaj