In this file photo, BJP leaders LK Advani and Murli Manohar Joshi attend a public meeting after appearing in a special court in connection with the demolition of Ayodhya's Babri Masjid, in Raebareli, on July 28, 2005. (PTI)

The special court held that the demolition of the 16th century mosque on December 6, 1992, was not a “pre-planned” incident but a “spontaneous” act.

BJP veterans LK Advani, Murli Manohar Joshi and Uma Bharti were among 32 accused acquitted in the 1992 Babri Masjid demolition case on Wednesday, 28 years after the incident pushed India into a cycle of communal riots and politics.

The court held that the demolition of the 16th century mosque on December 6, 1992 was not a “pre-planned” incident but a “spontaneous” act, adding that former Vishva Hindu Parishad (VHP) chief Ashok Singhal and other Sangh Parivar leaders wanted to “save the structure” as Ram Lalla statues were inside.

Judge Yadav observed that leaders who were present on the dais repeatedly tried to persuade the 'kar sewaks', led by the VHP, against taking any action on that day. 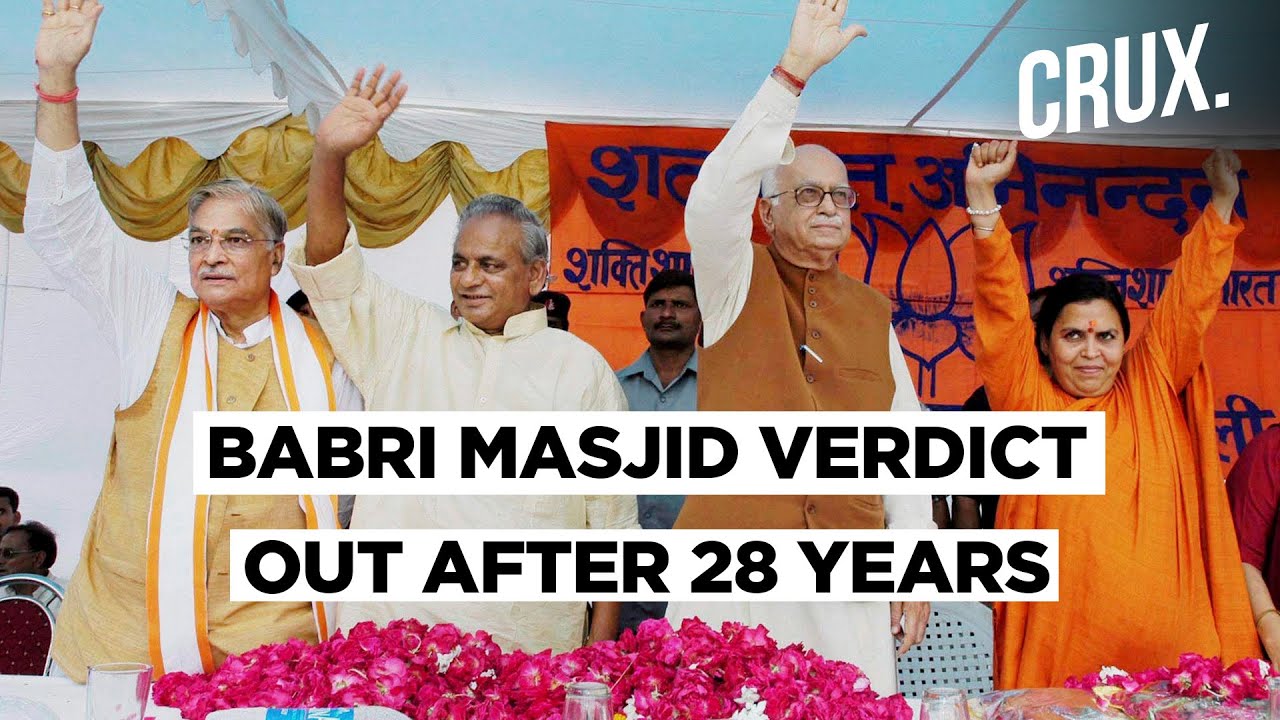 During the course of the trial the CBI produced 351 witnesses and 600 documents as evidence before the court, but the judge on Wednesday observed that the CBI had failed to substantiate the charges levelled against the accused. It added that video recordings submitted to the court were “tampered with”.

Charges were framed against 48 people, but 16 had died during the course of the trial. Over two dozen of 32 accused were present. Advani (92), Joshi (86), Bharti (61), Singh (88), Nritya Gopal Das and Satish Pradhan were not present in court but appeared via video conferencing. Uma Bharti and Kalyan Singh are admitted in separate hospitals after testing positive for Covid-19

Shortly after the verdict, celebrations broke out in Ayodhya and outside the Lucknow court with supporters of the accused distributing sweets.

Calling the Ram Mandir in Ayodhya a “cherished” dream, Advani says he feels “blessed” that the judgment “comes in the footsteps of another landmark verdict of the Supreme Court given in November 2019”, which gave the disputed Ram Janmabhoomi-Babri Masjid site to the Hindus.

Co-accused Joshi called it a “historic decision”. “This proves that no conspiracy was hatched for December 6 incident in Ayodhya. Our program and rallies were not part of any conspiracy. We are happy, everyone should now be excited about Ram Mandir's construction,” he said.

While the BJP too hailed the verdict with Uttar Pradesh Chief Minister Yogi Adityanath saying “truth had triumphed”, the opposition called it a “travesty of justice”.

“A complete travesty of Justice. All charged with criminal conspiracy to demolish Babri Masjid acquitted. It self imploded? The Constitution Bench headed by then CJI had said that demolition was an “egregious” violation of law. Now this verdict! Shame,” CPM leader Sitaram Yechury said.

AIMIM leader Asaduddin Owaisi said the verdict has sent out the message that “mass violence pays”. “Who demolished the masjid on December 6, 1992. Who broke the locks and vandalised the entire area? The whole world saw what happened, accused were inciting violence. The judgment satisfies the collective consciousness of Hindutva ideologies,” he said.