In continuation from Shaheen Bagh, women took the lead at the London protest. A bunch of girls spoke their solidarity with Indian women in dance and song, ending with a punch line on oppression of state.

London: A couple of thousand or so was a lot of people to turn up at a transplant of the Shaheen Bagh protest into London on Saturday. We’ve had a few fallings of these Shaheen Bagh shadows across London now; the protests are occasional but recurring.

The Saturday protest ended with an announcement of more to come. Demonstrations have been held also in support of CAA, and with more of those due as well. London has never been as far from India as the map would suggest; these days it’s only a more than averagely distant theatre from Delhi to play out the conflicting passions dividing India.

London’s Shaheen Bagh afternoon became Whitehall Bagh, on the road just across from Downing Street where the British Prime Minister has his office. The protesters then marched up to Trafalgar Square, along the Strand past a small (and separate) protest stall demanding fair elections in Zimbabwe, to wind up with a protest outside the Indian High Commission.

Outside, but not just outside, two police cordons kept the rally to the further of the two roads facing the High Commission. Traffic was kept moving through the near side road; it became in effect a third cordon to keep India House protected against vandalism seen at earlier demonstrations over Kashmir. Unlike Delhi, traffic disruption could be counted in minutes, not months. 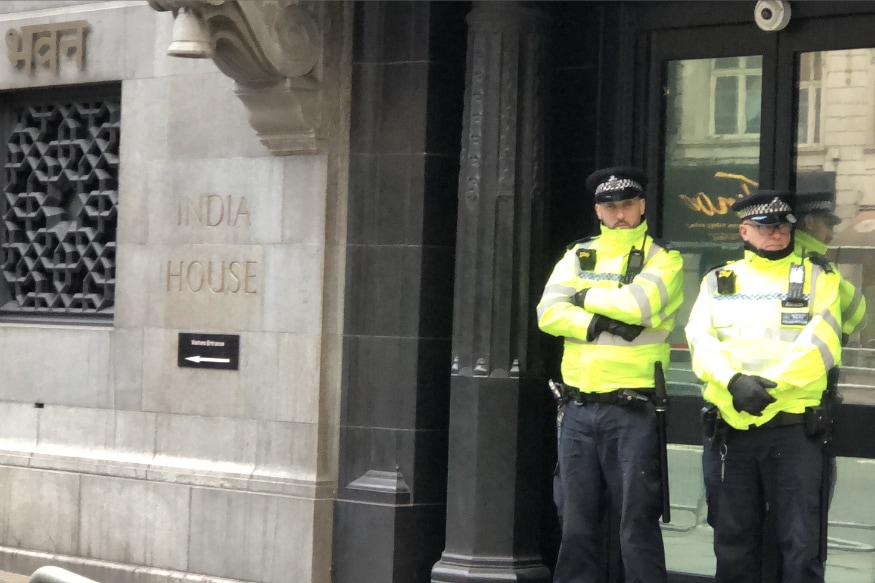 A number of groups joined hands — or at least came together to take turns with mics on stage.

The ‘Azadi’ chant became their shared keyword carried over from Shaheen Bagh (now as much a metaphor as a place). That word has made quite a political comeback with some innovative interpretations, but also to some its uncomfortable ambiguities.

The chant brought together all that comes with it, and all who came with it — a pot pourri of the political anger. So Dalit representatives, the speaker from the leftist Indian Workers Association, women’s rights supporters, the Malayali Muslims rep, and the activist calling for freedom for Kashmir all came together under that chant.

That last is of course the trickiest among the layer of overlaps under ‘Azadi’, as we heard once from the JNU campus and haven’t stopped hearing since. To many Indians, Azadi from hunger, from unemployment, from discrimination, even from what may appear an unacceptable ideology is one thing; Azadi for Kashmir is another. At the rally it all came together under that one word; and if it didn’t for some, no one said so from the stage.

In this no man’s land that London has become for South Asians, some speakers made their views emphatically unambiguous on just what that keyword-chant means to them. There can be no fight against the CAA that can be separated from the right of freedom for Kashmir, said a member of the Kashmir Solidarity Movement, that co-organised the protest.

A message was read out on behalf of Pakistani writer Tariq Ali: “The stars of Bollywood, most of whom kept silent over the atrocities committed in Kashmir, will learn their lessons the hard way.” Enter Kashmir, and ‘Azadi’ was not left to interpretation.

Indian Muslim Federation UK president Shamsuddin Agha told CNN News18 at the rally that the protest is against the CAA. “This is not a protest against India, it is for India, 100 percent. What we are talking about is misuse of power, they are categorizing us, dividing us into Hindu, Muslim, Sikh, Dalit and so on. And the government’s argument that the CAA is intended only to speed up Indian citizenship for persecuted minorities from three Muslim countries, and is not aimed at Indian Muslims? “What they are saying is not true. This is aimed at isolating Muslims.”

The rally produced more heated sentiment than cool argument; it was after all a protest rally, not a seminar.

In continuation from Shaheen Bagh, women took the lead at the London protest. A bunch of girls spoke their solidarity with Indian women in dance and song ending with the punch line, “The oppressive state is a rapist state, the rapist is you,” fingers pointed at the Indian High Commission, and the Indian flag it flew. The Indian flag was all over the place within the rally too; like ‘Azadi’ the flag too came to mean different things.