Behind Fatwa Against Ajmer Dargah Chief, Power Tiff Between 2 Brothers

About two months after the spiritual head of Ajmer Dargah, Syed Zainul Abedin, spoke against the practice of instant triple talaq and said consumption of beef should be banned across India, a fatwa has been issued against him

Ajmer: About two months after the spiritual head of Ajmer Dargah, Syed Zainul Abedin, spoke against the practice of instant triple talaq and said consumption of beef should be banned across India, a fatwa has been issued against him, calling for “social boycott” of the “ignorant Muslim”.

However, what appears like difference of opinion over religious issues is driven by bitter family feud for power and control of property worth hundreds of crores of rupees, in and around Ajmer Sharif.

News18 looks at what transpired behind the scenes as the holy town stands divided between Abedin and his brother Alaudin Alimi.

What happened in April?

“I declare that my family members and I will not consume beef and that triple talaq in one sitting is not good as per Islamic law,” said Abedin, the Sajjadanashin of the Ajmer Sharif Dargah in Rajasthan, in the first week of April.

The statement by Abedin, the 22nd descendant of Khwaja Moinuddin Chishti, called for a national law against beef consumption, saying it would bring communal harmony in the country. Additionally, he said instant triple talaq was un-Islamic and called for a complete ban on the same. 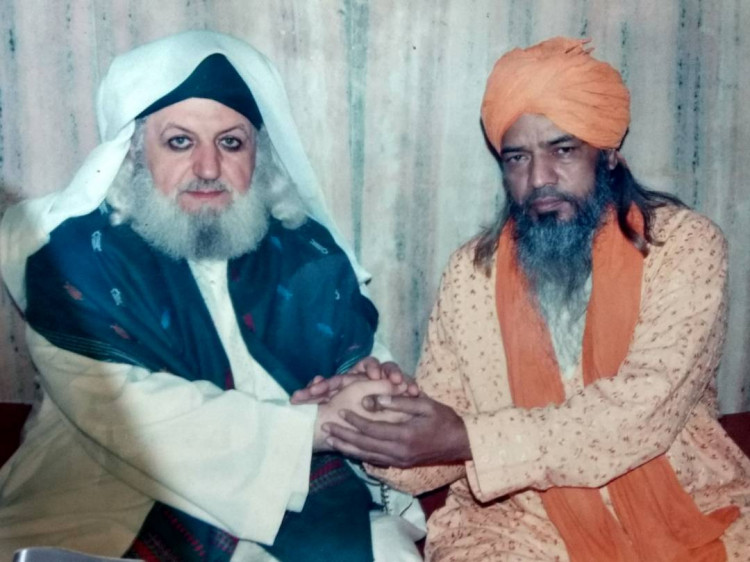 Sajjadanashin of Ajmer Dargah (Right) along with a member from the family of the revered saint Ghous Pak from Baghdad. (Photo: Debayan Roy)

Soon after the declaration, his brother advocate Alaudin Alimi declared himself the new Sajjadanashin, saying his brother was “no longer a Muslim”. The statement and the controversy that followed not only angered Zainul’s family members, but also split the holy town.

Soon after an uproar over his comments, Abedin said his reasons for supporting the beef ban were different.

“Buffalo meat is expensive than chicken. Plus, the meat only results in diseases like diabetes, and heart attack. If Muslims stop eating it, they will remain healthy and people will end up saving money to spend on their families and children,” Abedin told News18.

On triple talaq, he said the divorce proceeding in one sitting was invalid. “Triple talaq can indeed separate the couple, but this method is not approved by the Almighty. Hence, a gap of 90 days is preferable.”

The statement was in contrast to what he had earlier said: “Shariat does not mention the practice of triple talaq. Also, if there is consent from both parties during the marriage, then why not during separation? When families are present for marriages, then why are divorces given in seclusion?”

‘My brother’s statements are against Islam’

Alimi approached top Sunni clerics to get a fatwa against his brother. Speaking to News18, Alimi said he did not wish to comment but the latest fatwa against the Dewan speaks volumes.

Now after the fatwa by Rajasthan Darul Uloom against his brother, Alimi believes the former should give up the post of Sajjadanashin. “We are waiting for fatwas from other scholars too. And this one specifically states that he was wrong. He has not only insulted the Prophet by making such a statement, but has also gone astray from Islam,” said Alimi.

Alimi has now pleaded the Governor of Rajasthan, Kalyan Singh, and the central government to remove the sitting Dewan.

One of the first things that Alimi said after his brother’s statements was that he was the new Dewan.

On the other hand, in his ancestral Dewan haveli, located in a lane on the Dargah Bazaar road, Zainul showed the documents to prove that he was the only spiritual head of the Dargah. House of Advocate Syed Aludin Alimi which the Ajmer Dewan claims to be bilt by him years ago. (Photo: Debayan Roy)

“Pick up any record, starting from the Farman (order) of Emperor Akbar to the orders by the English judges of the Privy Council to the order of the Supreme Court in 1987 upholding the rule of primogeniture. The position of the Sajjadanashin cannot be challenged by anyone. I am the eldest son of my father and hence the closest descendant to claim this seat,” said Dewan Zainul.

Naseeruddin Chisti, eldest son of Zainul, said his father had already appointed him the successor. “What my uncle says holds no ground. He has been living off my father’s grace and wealth all his life. There are strict procedures in place for appointing the next Sajjadanashin,” said Chisti.

However, Alimi appears surprised at such an interpretation of rules. “If the President of our country can be removed by following Article 61 of the Constitution, then how can a Sajjadanashin of Dargah never be removed from his position?” wondered Alimi.

He further stated that a 1967 Supreme Court verdict is often cited by the father-son duo but that verdict is completely silent on any aspect of appointing the son of a Sajjadanashin as the successor.

There can be no fatwa against me

Zainul had also questioned the very idea of a fatwa. “I have seen a lot of Fatwas. It is nothing more than a suggestion,” he had told News18 in April. The perfume seller near the haveli of Ajmer Dewan says how the dargah chief tried to donate land to Wahabis but later rescinded in the face of intense protests. (Photo: Debayan Roy)

However, in the current fatwa, top cleric Mufti Sher Mohammad Khan has stated that such a statement “reeks of ignorance and shows that one has gone astray from the faith, and that he has no Islamic knowledge.”

The fight between the brothers has split the Ajmer Sharif community. One prominent opinion is that the Dewan was just acting to ‘please the government’.

“He is not popular among the people. After Zakir Naik’s fall, the community has realized that they need to be in the good books of the ruling government,” said Nizamuddin Rizvi, a perfume seller living near the Dargah.

Even Alimi spoke on this issue and said that the Dewan had attempted to give away land to the Deobandis but rescinded only after he protested against it. “In November 2016, the national conference of Wahabis (Deobandis) was held here. Dewan had then promised to donate 200 bighas of lands to this sect for opening a university. But after my protests, he stopped the project,” said Alimi. Mohd Ishrat who has been in Ajmer since birth says the Dewan has no religious knowledge else he would not have made such statements. (Photo: Debayan Roy)

Now the fatwa has also taken note of this relationship of the Dewan with the Wahabis. “The Wahabi sect is an insult to the prophet and the religion. Supporting such a sect shows how ignorant the person is. Such a person should seek public forgiveness. If not, then fellow Muslims should stop acknowledging him as one among them,” reads the fatwa.

Mohammed Ishrat, who has been selling religious books outside the holy shrine for decades, said Abedin was only after money that the shrine generated.

“Alimi was courageous enough to speak on behalf of the public. His brother has no knowledge of religious scriptures and he forgets which seat he is talking from. His words can have a lot of influence. He has a lot of money, but no heart,” said Ishrat.

Ishrat added that the current spiritual leader’s claims over the seat stand on precarious grounds. “The governor had appointed Zainul’s father as the Sajjadanashin, after which his son succeeded him. The governor has no right over such an appointment. So, technically, the problem in appointment dates back to when his father was appointed,” said Ishrat.

Dewan Zainul, however, is unperturbed by the accusations made by people. “This is not the first time I’ve issued statements. Every year, on the 5th of every lunar month, in a gathering at the Khanqa, I issue statements of women infanticide and many other issues. The state of intolerance in the nation has compelled me to issue these statements,” said the spiritual head. He went on to say that the sanctity of the dargah was under threat. 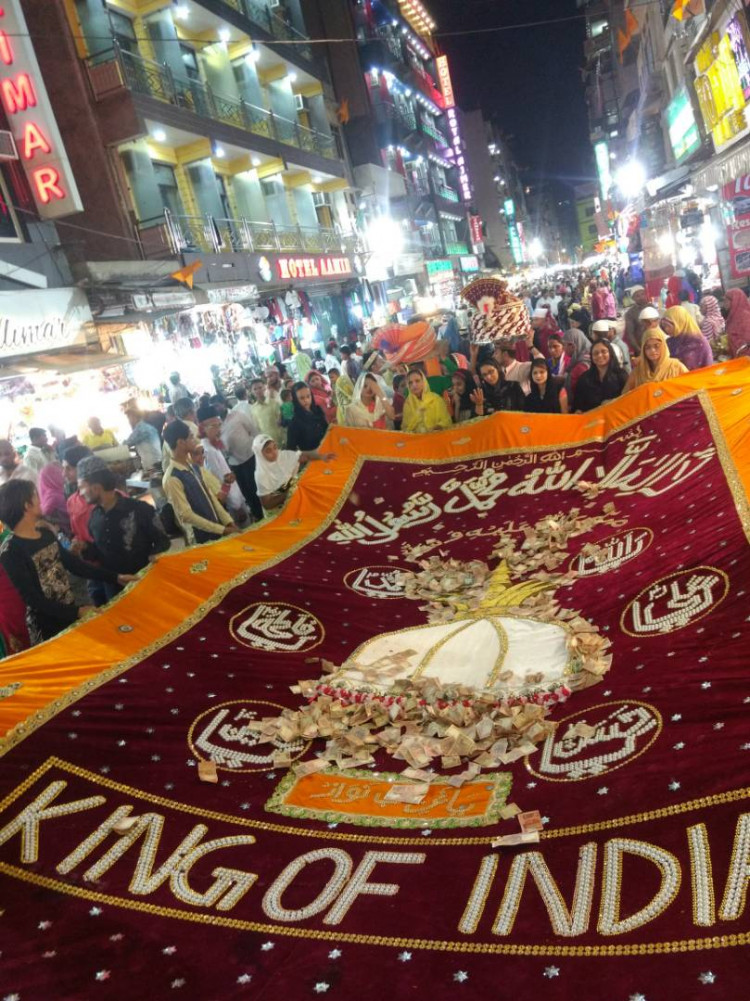 The money and offerings donated to the Dargah is managed by the Nazim appointed by the GOI, however, the Dewan said there was an immediate need for a trust to manage these funds. (Photo: Debayan Roy)

“Every time I have brought this up, I have been attacked. We need a trust to channelize the funds of the shrine for meaningful work,” said Dewan Zainul, who now wears a bulletproof jacket while stepping out of his house.