A health official scans the body temperature of a student who was stranded in Delhi on his arrival in Kashmir. (PTI)

Whatever the reason might be, the slower rate of growth than what was projected and this recent flattening of the curve (in terms of number of new cases) and the sheer timing of it is to India’s credit and advantage.

There has been a remarkable consistency in the daily number of Covid-19 cases India has reported since the last 8 days, starting May 6 to May 13. Leaving aside May 10, which was the only day when the country crossed 4000 cases, the number has ranged between 3100-3800 on the remaining seven days.

This uniformity in the number of daily new cases over the last week has remarkably slowed down the doubling of cases to 13.9 days in the last three days as on May 14. It has also ensured that India's tests/case ratio has only just marginally dropped from an average of 23.14 between May 4-8 to 22.92 between May 9-13. 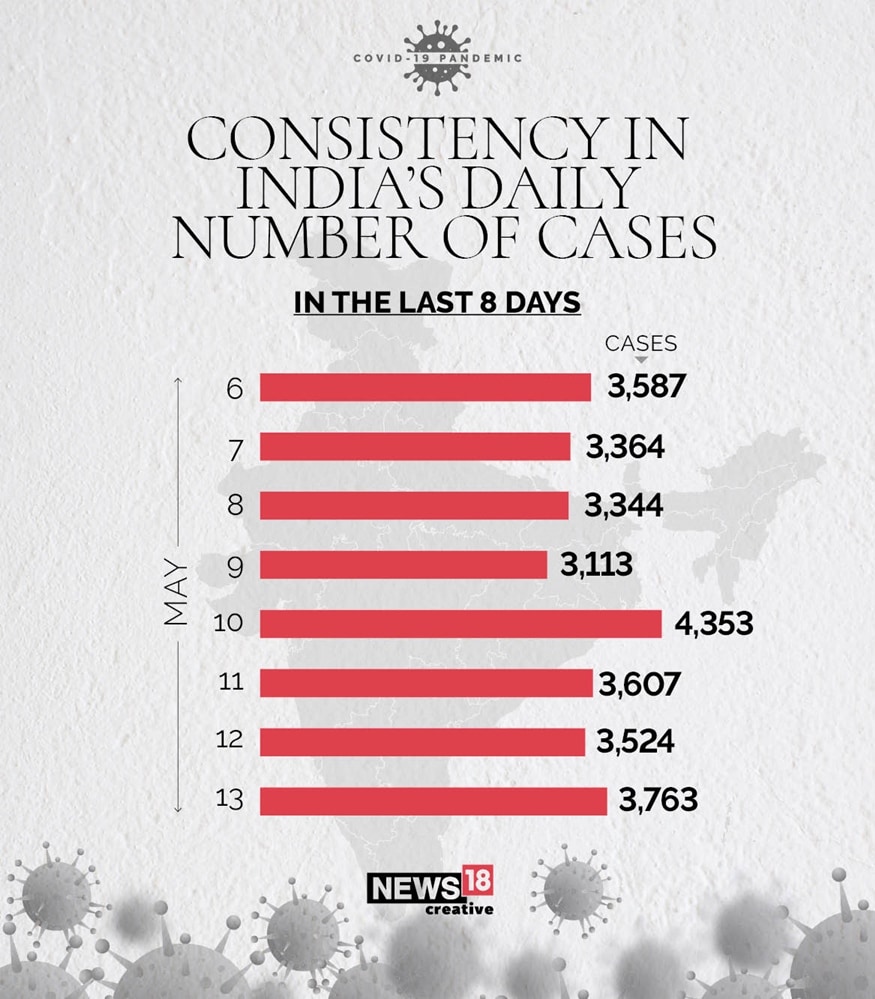 The uniformity has also meant that India’s daily percentage growth of cumulative cases has ranged between 4.98% and 6.93% over the course of the last week (May 7-13) with the weekly average of 5.69%. These numbers become significant when one views the corresponding stages of the coronavirus in India. The country relaxed norms and eased curbs on May 3, when the second phase of the lockdown ended.

This, coupled with the fact that India is yet to see the peak of the infection, many experts warned of an exponential rise in the number of cases and deaths from the May 10.

But curiously, and fortunately for India, that hasn’t happened. The average number of cases between May 4 and 8 was 3,438. This increased to 3,672 between the 9 and 13 – and that is no exponential rise.

It is interesting to compare India’s numbers with some other countries who have been severely affected by the Covid-19 pandemic.

A quick glance at the infographic below and one can see more fluctuations or higher deviations from the mean for all the above countries with the exception of Russia – irrespective of whether the countries have flattened the curve or are yet to reach their peak. All major Western European nations are past their peak and on a downward curve - Italy, France, Spain, Germany, Belgium and even the United Kingdom. The same is the case with USA.

Russia is the only exception among the European countries yet to reach its peak. The cases are rising in the southern hemisphere and it is not surprising to see the curves of Brazil and Peru on the upswing. 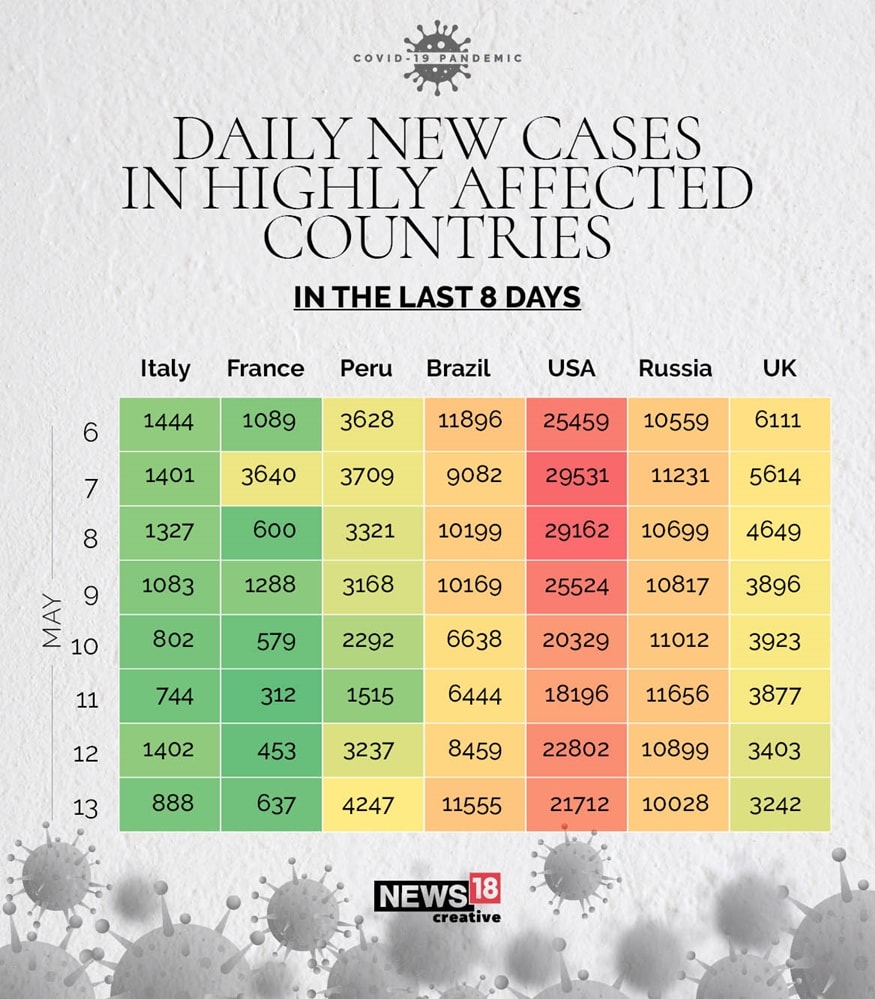 An analysis of the 14 worst-affected countries (in terms of number of cases; we did not take China as they hardly have any new cases in the last 8 days) puts India only in second position, interestingly after Russia, when one measures the deviation of daily cases from the average of the last 8 days. 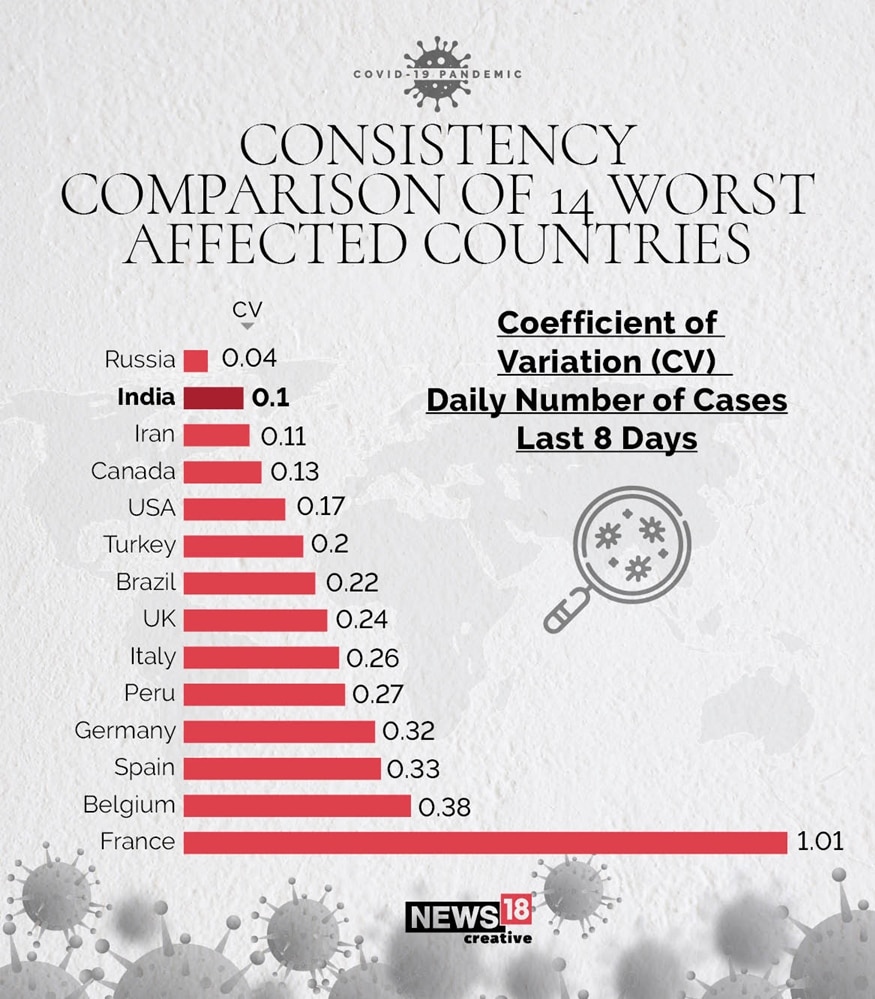 India seems to have been doing something right that it is not witnessing an alarming rise in the number of cases (and subsequently deaths) even after a number of lockdown restrictions have been lifted during the last week. Furthermore, the country is now testing 1 lakh samples a day and is fast moving towards its peak.

This uniformity in the number of daily new cases over the last week has remarkably slowed down the doubling of cases to 13.9 days as on May 14 in the last three days.

May be India is reaping the results of a stringent lockdown 1 and 2. May be we are closer to the peak than most experts have predicted.

Whatever the reason might be, the slower rate of growth than what was projected and this recent flattening of the curve (in terms of number of new cases) and the sheer timing of it is to India’s credit and advantage.