Bengaluru Rains LIVE Updates: A massive traffic jam was caused on Marathahalli-Silk Board junction road in Bengaluru amid severe waterlogging

Bengaluru Rains LIVE Updates: Karnataka’s Bengaluru is battling severe waterlogging with heavy rain lashing the city, leading to flood-like situation in several areas. Chief Minister Bommai said that the government would talk to IT companies and discuss compensation for losses due to rain-related damages.

IT industry veteran Mohan Das Pai uploaded a video on Twitter, titled “Pls see in Bengaluru,” that showed a man dressed up as Lord Ganesh and wading through near knee-deep water, even as vehicular traffic was seen crawling in the background. WATCH | Bengaluru Rains: Who's Responsible for Civic Mess in Bengaluru?

Who's responsible for the mayhem in civic mess in #Bengaluru? @nnarasimhan (Architect & Urban designer) shares his views

Listen to what the callers say

#BengaluruRains | City flooded after heavy rainfall, waterlogging cause traffic snarls; water supply to be hit for 2 days@harishupadhya with the upates

Bengaluru Rains | Is it because of the consistent lack of city planning that has led to this condition today?

WATCH | Bengaluru Rains: City Will Face Floods in September if Govt Doesn't Get Its Act Together, Says Activist

Bengaluru Rains |"I have warned that if the government doesn't get its act together, we will have floods in September." Activist S. Anirudhan answers.

Senior Journalist @bsarun24 explains the government's steps in this case. Parts of Bengaluru Water Supply to be Hit for 2 Days

Drinking water supply will remain shut for two days in parts of Bengaluru, according to a report by India Today. Heavy rains in the city led to several areas being inundated and water-logging on roads including arterial ones hit traffic flow while boats and tractors were pressed into service in certain parts.

The Bane of Bengaluru: Years of 'White Topping' is Drowning India's Tech Capital

It’s not just “nature’s fury”, but rampant corruption, indiscriminate construction and disastrous engineering that has left Bengaluru to drown. Overnight rains in the past week have once again left India’s technology hub exposed and crumbling, with its 12 million residents left at the mercy of civic apathy. READ MORE

Water-logging in localities like Rainbow Drive layout and Sunny Brooks Layout on Sarjapur Road among others were to such extent that tractors and boats were used to ferry students and office goers in the morning as several lakes in the city overflowed due to heavy rains. 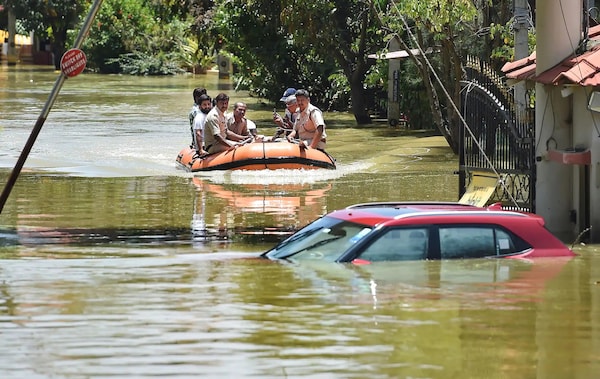 According to BBMP rainfall forecast, widespread very light to moderate rains with isolated heavy rains associated with thunderstorms are likely.

“30 places in Mahadevapura zone of the BBMP have been identified as worst hit and instructions have been given to the BBMP and BWSSB for draining water from the roads which have been water logged by creating temporary drains, ” the Chief Minister said as per Times of India.

Residents Rescued by SDRF on Tractors

Residents, including senior citizens and students, rescued by SDRF personnel and others on tractors at Yemalur near HAL in Bengaluru, as per Times of India.

The Whitefield Traffic Police Department on social media shared that thanks to efforts by their team, BBMP and local residents, water logging in the area has reduced.

Inspector Sir along with the area officer and team at varthur Kodi/manipal hospital varthur area.Water logging is reduced.

We thank the Helping hands from #BBMP along with the local residents & commuters. pic.twitter.com/jRerrFTNSQ

'Problem is That We've Had 3 Governments in 4 Years': Sr. Journalist RK Upadhyay on Waterlogging

#BengaluruRains | Problem is that we've had 3 governments in 4 years: Sr. Journalist RK Upadhyay

'City of lanes is fighting back'

Chief Minister Basavaraj Bommai said he will be visiting the T.K.Halli unit of Bengaluru Water Board in Mandya district that will manage the drinking water supply to Bengaluru City due to the rushing of water into the unit following heavy rains on Sunday night. “I am leaving for Mandya soon after Teachers’ day function to assess the situation”, he told reporters.

Parts of Bengaluru Water Supply to be Hit for 2 Days

traffic jam was caused on Marathahalli-Silk Board junction road in Bengaluru amid severe waterlogging.

Several areas in Mahadevpura and Bommanahalli have reported flooding during to heavy rains. The IMD has issued a yellow alert in the city and in several districts in Karnataka, and has warned of heavy rains until September 9.

Karnataka Chief Minister Basavaraj Bommai said, “There have been heavy rains in Bengaluru, I have spoken to the Commissioner (BBMP) and other officials. I have asked officials to depute two State Disaster Response Fund (SDRF) teams to Mahdevapura and Bommanahalli zones in the city that have been worst affected, with boats and other equipment..also engineers are there.”

He further said, he has instructed officials to see to it that water is drained out from the inundated roads at the earliest. “There is a plan on how to create a temporary drain and how to go about it (drain out water), it will be operationalised today,” he added.

Noting that due to heavy rains on Sunday, Bangalore Water Supply and Sewerage Board’s (BWSSB) unit that manages Cauvery water supply to city at T K Halli has been flooded and has caused damage to machinery there, Bommai said, he will be visiting there to inspect the spot.

“Already BWSSB chairman, engineers, Urban Development Secretary and other officials are there, work on draining out water is underway…probably by afternoon or evening things will be under control. All technical and emergency works are underway,” he said.