Bengaluru Will be Unliveable in Five Years, Warns IISC Study

A boy holds a dead fish in Lake Puttenahalli on the outskirts of Bengaluru. (Photo: Reuters)

D P Satish
Bengaluru: India’s Silicon Valley will be unliveable in the next five years screams an ‘alarmist’ headline in leading English newspaper "Deccan Herald". It has carried an article based on a study conducted by the reputed Indian Institute of Science (IISC), Bengaluru which presents a bleak picture for the city.

The IISC study claims that Bengaluru has witnessed an alarming growth of built–up area in the last 40 years. The growth has been a phenomenal 525%. It also says that the vegetation of the once “Green City” Bengaluru has seen a decline of 78%.

The city also known as "Lake City" has lost 79% of its water bodies during the same period.

"These are not just figures, but the lakes and trees that surrounded you have quietly disappeared as a result of the urban sprawl," says the IISC study.

According to Professor TV Ramachandra of the Centre for Ecological Sciences at the IISc the city is seeing a mad, senseless growth and its consequences can be disastrous in the near future.

He warns that Bengaluru, the most sought after city in India till a few years ago, will be unliveable and a dead city within the next five years. 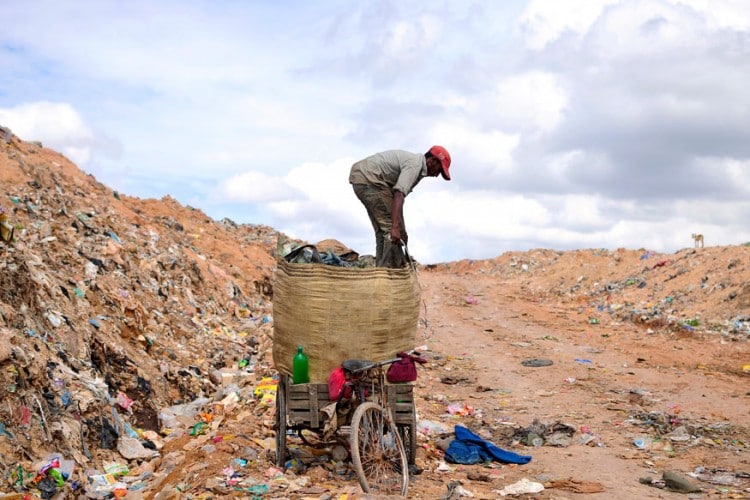 A rag picker prepares to pack a sack filled with recyclable materials at a garbage dump in Bangalore. (Photo: Reuters)

Till recently, Bengaluru was known as India’s only naturally air-conditioned city because of its pleasant weather all through the year. The British made it a garrison city after the fall of Tipu Sultan in 1799.

They liked the place so much and even started calling it a home away from home. Bengaluru was a small provincial town till the 1970s with a modest population.

Situated 3000 feet above sea level, Bengaluru has no rivers. Over 600 small and big lakes kept the city cool and green.

But the economic boom in the last two decades has destroyed most of them. The city gets water from Cauvery river which flows almost a thousand feet below and 100 KM away through giant pipes. If the Cauvery dries up, Bengaluru will turn into a desert.

The economic liberalisation of the early 1990s changed the city forever. In the last 25 years, its population has gone up by 150% - from a manageable 40 lakh to unmanageable 1 crore plus in 2016.

Bangalore Development Authority (BDA) is held responsible for the decline of a great city. BDA is accused of functioning like a real estate agency.

According to the Deccan Herald, former principal chief conservator of forests AN Yallappa Reddy, the government should use 40,000 acres of land reclaimed after evicting squatters for community benefits such as creating lung space, water bodies and playgrounds.

The study may be an alarmist one and Bengaluru may not become unliveable in just five years. But it is a fact that the future is bleak for a wonderful city.