On Tuesday, protesters were careful not to be seen as supporting any political party and extremely wary of saying anything about the Delhi assembly election results.

On the day of AAP's massive victory in Delhi assembly elections, women of Shaheen Bagh sat on a silent protest.

New Delhi: Anyone who has visited Shaheen Bagh in the last one month would vouch for the fact that women protesters there love to talk. Using chants, slogans and discussions as their weapons, they know how to make a case against the Citizenship Amendment Act (CAA) and the proposed National Register of Citizens (NRC) — the two key issues of the protest that began on December 15 last year.

No Words, Only Placard

But on Tuesday, an eerie silence enveloped the protest site as the most potent tools of the movement — slogans and poetry — were put aside and silence was embraced. The placards did the talking even as artistic expressions of the protest – a painting in progress and an art installation being given final touches – continued to find an outlet.

There were no chants of ‘Inquilab Zindabad’ or ‘Azadi’ and the only thing making a point was a huge banner of Mahatma Gandhi with ‘Maun Vrat’ printed on it. 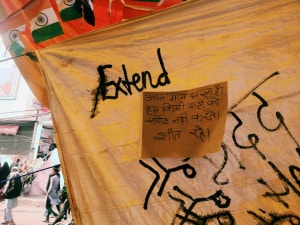 The Fatima Sheikh and Savitribai Phule library — set up at a pavement — had readers in full attendance as media poured in to get a sense of Shaheen Bagh on the day Arvind Kejriwal-led Aam Aadmi Party won the Delhi assembly elections with a massive mandate.

Women sat together in groups, showing scribbled notes to visitors and media persons whenever they wanted to pass on the message of silent protest. Some even had a black bands covering their mouth, while some were being nudged by others for engaging in conversations. No words of freedom were uttered but placards against the CAA, NRC and NPR put up a strong show.

“Please don’t gather around here, no woman will talk today. We don’t want to speak on any party’s victory or another party’s loss. Our battle is different,” said Shezi Khan, a volunteer who wore a saffron-coloured turban. A practicing Muslim, Khan recently started sporting a tilak and turban. “Prime Minister Narendra Modi had said, ‘Identify them from their clothes.’ So now identify me with my turban and tilak,” he told News18. Khan, along with a few other boys was manning the silence and ensuring no one gets the protesting women to speak on “politics.” He works as a brand promoter and has taken a break from work to participate in the stir.

On another side, two old men sat at the exit of the enclosure meant for women with a note saying, “Aaj maun dharna hai, hum kisi party ko support nahi karte. Shant rahein!” (Today is our silent protest, we don’t support any political party. Keep silence.) The same note was seen pinned to the curtains of the protest enclosure. Some women also help placards against the police attack in Jamia Millia Islamia and Tughlaqabad.

No Celebration of AAP Victory

The protesters were careful not to be seen as supporting any political party and extremely wary of saying anything about the election results as they felt it would “politicise” their battle and give it a partisan colour.

Tuesday was all about discipline. Any attempt by media persons to speak on AAP victory was either met with a cold shoulder or a shrug. Some of them uttered in discomfort, “Humse kya?” and “Hum kya karein? Ladaai toh jaari hai.”

In one group, women who were not participating in the silent protest but came for support were heard talking. “Ever since the Delhi election campaign began, women here have been at the centre of it. There were allegations of protesters taking bribe. Not just that, BJP leaders also accused our movement and fight to be supported, patronised by political parties. It is better to keep quiet today, and any act will be seen as political,” one of them said.

Hakeem Usmani, a Unani doctor who was there with his wife, discouraged the media from speaking to his wife, saying, “The day is important for Delhi as it has elected its government. We have cast our votes, our duty is done and we are continuing our fight against the CAA. The people of Delhi have given their mandate, they voted on issues of development. But silence is better today to continue this fight. It is better to do this than to be seen bursting crackers for someone’s victory or loss. The reasons for protest here are very different.”

Meanwhile, celebrations continued in the AAP headquarters as its candidate from Okhla, Amanatullah Khan, won with a huge majority. “Ab maloom hua Shaheen Bagh ka current kaisa hota hai,” said one of the woman protestors to her gang of women, who in return patted her back for the timely utterance.