LIVE Updates: At least nine persons were killed and hundreds injured today in violence across several states as protesters blocked trains, clashed with police and set fire to private and public properties, including police posts, during a nationwide bandh called by Dalit groups. Thousands were detained following widespread incidents of arson, firing and vandalism across over ten states, several of them being BJP-ruled including Madhya Pradesh where at least six persons died during the protests against the alleged dilution of the SC/ST (Prevention of Atrocities) Act. Two persons died in Uttar Pradesh and one in Rajasthan, according to officials there. Other states hit with violence included Punjab, Bihar, Jharkhand, Odisha, Gujarat, Haryana, Maharashtra and Delhi. Those arrested included a former BSP MLA in UP. Curfew was imposed in several places, while the Union Home Ministry, which rushed 800 anti-riot policemen to MP and UP, asked all states to take preventive steps and maintain public order to ensure safety of lives and property. The Army and paramilitary forces were also put on standby in Punjab. In Punjab's Firozpur, protesters openly brandished swords during the protests, while cars in UP were set ablaze. The agitation also reached the capital as angry Dalits blocked roads in Connaught Place. A few protesters were detained by Delhi police. Dalits have come out in heavy number across the country to protest against the dilution of the SC/ST Act by the Supreme Court. In the face of stiff pressure from both within the NDA and opposition, Union Law Minister Ravi Shankar Prasad has said that the government does not agree with the Supreme Court's decision and has filed a strong, comprehensive review petition against the apex court's order.

Alleging that Dalit atrocities have peaked in the country ever since BJP came to power in 2014 Congress’ Priyanka Chaturvedi on Monday said that the Centre had deliberately avoided dialogue with the aggrieved Dalits after the Supreme Court pronounced its verdict on SC/ST (Prevention of Atrocities) Act and it swung into action only after the agitation intensified and pressure was exerted on it.

MADHYA PRADESH | Curfew was imposed in some areas of Gwalior as well as in cities of Bhind and Morena districts in view of the violence witnessed during the bandh. Internet services have been suspended in the entire Chambal and Gwalior regions, besides the Sagar region which also saw protests. Six people were killed and several others injured in Madhya Pradesh on Monday. The minister said that the delay in filing the review petition against the SC order on SC/ST act was caused due to four-day public holiday.

DEATH TOLL 9 | Another person died in Uttar Pradesh during the violence that rocked the 'Bharat Bandh' on Monday. This takes the total death toll up to nine across three states. Six have died in Madhya Pradesh, one in Rajasthan and two persons in Uttar Pradesh.

AIRLINES WAIVE CHARGES | Jet Airways and Vistara today announced waiving cancellation and charges for change of dates for those passengers booked for flights operating to and out of airports in places affected due to Dalit protests. "Due to unrest in Chandigarh, Patna and Amritsar, we are waiving off penalties for date/ flight change, refund, no-show & fare difference (if any) on all confirmed tickets for flights to/out of these cities for travel on April 2," Jet Airways said in a tweet.

Smoke billows out of burning cars during the 'Bharat Bandh' in Muzzaffarnagar on Monday. (PTI Photo) JIGNESH MEVANI | Dalit leader and independent MLA Jignesh Mevani joined the protests in Ahmedabad and said the apex court verdict was against the Constitution. "The case before the SC was related to a single person charged under the Atrocities Act, who pleaded that he was not guilty. The petitioner did not ask for any revision of the entire SC/ST Act. "But, the apex court gave a verdict as if it is over and above Parliament or the Constitution," Mevani told reporters.

BJP ATTACKS CONGRESS | The BJP today underlined the government's measures for the development of Dalits and dubbed Rahul Gandhi a "political vulture" out to seek "advantage" after the Congress chief blamed the ruling party for the community's plight. Union minister Thawarchand Gehlot and Arjun Ram Meghwal, both Dalits, sought to turn tables on the Congress over its treatment of B R Ambedkar, an icon of the Scheduled Castes. Their attack on Congress chief Rahul Gandhi came following his remarks that it was in the DNA of the RSS and BJP to keep Dalits at the lowest level in the Indian society.

The Congress and the Left parties today blamed the Centre for the violence during protests by Dalit bodies against the alleged dilution of the SC/ST Act and accused it of not representing the case properly in the Supreme Court. Congress President Rahul Gandhi slammed the RSS and the BJP for the plight of Dalits.

TRAINS DISRUPTED | Over 100 passenger and mail train services were today affected, nine were cancelled and a few more short-terminated. As the protesters squatted on the tracks, hurled stones at the trains and wreaked havoc on the platforms, the railways cancelled the Amritsar-Jaynagar Saryu Yamuna Express, New Delhi-Amritsar Shatabdi Express, Jaipur-Chandigarh Intercity Express, Ajmer-New Delhi Shatabdi Express and the Sealdah-Varanasi Express, scheduled to have run today.

UTTAR PRADESH | One person was killed, over 70 others, including many policemen, injured while 448 people were arrested in Uttar Pradesh during the Dalit protests on Monday. Several towns in western UP saw violence and in Meerut, a former BSP MLA Yogesh Verma, was among those arrested, police said. There were several incidents of violence in Meerut, including the torching of a police post while in the neighbouring Muzaffarnagar, a man was killed and several vehicles were damaged, they added.

PUNJAB | Punjab Chief Minister Amarinder Singh today directed the security forces to stay on alert in view of the "volatile situation" prevailing in some of the neighbouring states during Bharat Bandh called by various SC/ST organisations. Singh urged the Scheduled Castes and Scheduled Tribes community to wait for the Supreme Court's decision on the review petition filed by the Centre and assured them of all possible efforts to address their grievances, both legally and administratively. 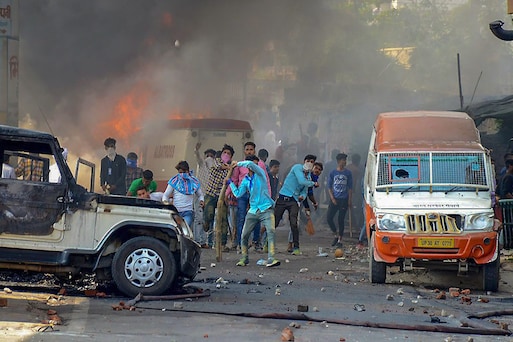 While six were killed in cross-firing in Madhya Pradesh alone, one each died in Uttar Pradesh and Rajasthan. Curfew was imposed in several places and thousands were detained. Bihar: Reports from Patna said that more than 3,000 people were held by the police across Bihar for disruption of public order during the bandh.

East India: Rail and road traffic got disrupted and properties vandalised across Bihar, Jharkhand and Odisha today as violence erupted during protests by Dalit and tribal organisations. Police arrested thousands of agitators in Bihar and Jharkhand during the day-long bandh.

The CPI(M) in a statement said the response to the call for a 'Bharat Bandh' by various Dalit organisations had been widespread in states like Punjab, Rajasthan, Madhya Pradesh, Bihar, Jharkhand, Odisha and Uttar Pradesh. "This shows the anger against the Supreme Court's decision to dilute the SC/ST Prevention of Atrocities Act", it said.

1700 PERSONNEL RUSHED IN | The Centre today rushed 1,700 anti-riot police personnel to Uttar Pradesh, Madhya Pradesh, Rajasthan and Punjab after violence erupted in the four states during a nationwide bandh called by Dalit outfits.

Bharipa Bahujan Mahasangh leader Prakash Ambedkar today said the Supreme Court and the Centre were responsible for today's violence in various states during the nationwide bandh called by Dalit outfits.

The Supreme Court declined urgent hearing on a writ petition filed by All India Federation of SC/ST Organisations against the verdict claiming that the entire nation has witnessed large-scale violence during today's 'Bharat Bandh'. The court said the plea would be listed and heard in due course.

CENTRE ON SC/ST ACT | As Dalit protests turned violent, the Centre today moved the Supreme Court seeking a review of its recent verdict on scheduled castes and tribes, saying it has led to "dilution" of some stringent provisions of law to prevent atrocities against them. Separately, Law Minister Ravi Shankar Prasad said the government "differs" with the reasoning given by the apex court judgment "virtually redoing the entire architecture of the Scheduled Castes and the Scheduled Tribes (Prevention of Atrocities) Act". 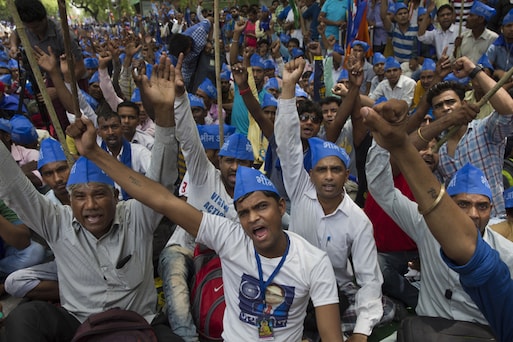 Former Union minister Sharad Yadav today termed the Centre's review plea in the Supreme Court against its ruling on a law on atrocities against Dalits an "eyewash" and demanded that the government should rather bring an ordinance. "The conviction rate under the SC/ST (Prevention of Atrocities) Act was anyway significantly lower than the national conviction rate for other crimes. Therefore, the government should bring an ordinance as an immediate relief," he said in a statement. "The review plea is nothing but an eyewash," Yadav added.

How then can we expect the BJP to work against dilution of SC/ST Atrocities Act? #BharatBandh

Siddaramaiah: They beat up poor Dalits for handling dead cattle, attack Dalits for celebrating at Bhima Koregaon memorial & their Ministers call Dalit activists protesting against attempts to change the Constitution as Dogs.

In a series of tweets, Karnataka Chief Minister Siddaramaiah criticised the Centre for not doing enough to prevent the alleged dilution of the SC/ST Act. He said, "The BJP led NDA Govt has not taken steps to prevent the dilution of the SC/ST Atrocities Act. The BJP does not care for the Dalits. They try to appease them with Jumlas & at the same time deploy Ministers like Anant Kumar Hegde to say they are here to change the Constitution."

Madhya Pradesh CM Shivraj Singh Chouhan, says, “Some people are trying to disturb peace in Madhya Pradesh. We will take strict action against them. I appeal for peace. The government will take all measures to maintain peace.” A total of six people died in Madhya Pradesh as Dalit protests turned violent during Monday’s Bharat Bandh.

DEATH TOLL 8 | Death toll in Madhya Pradesh goes up to six while the total count across states now stands at 8. One person has died each in Rajasthan’s Alwar and Uttar Pradesh’s Muzaffarnagar.

Over a dozen Dalit people were killed and hundreds were injured when peaceful rallies across several places in the country turned violent.