Home » News » India » 3 Arrested and 9 Minors Detained in Jharkhand Over CBSE Paper Leaks: All You Need to Know
3-MIN READ

3 Arrested and 9 Minors Detained in Jharkhand Over CBSE Paper Leaks: All You Need to Know

Superintendent of Police in Jharkhand's Chatra.

The minors will be produced before the Juvenile Justice Board, Jharkhand Police said.

New Delhi: The leak of Class 10 Mathematics and Class 12 Economics exam papers has left the CBSE and HRD ministry red-faced, and the students with a hectic calendar before competitive tests. Though fresh dates for both re-examinations have been announced, students have taken to the streets, while the opposition Congress has demanded the sacking of minister Prakash Javadekar and CBSE chief Anita Karwal.

Here are the top 10 developments on the issue:

1. 9 detained in Jharkhand: According to a report, Jharkhand police have detained nine minors in connection with the paper leaks. The minors will be produced before the Juvenile Justice Board. “Three people have been arrested under provisions of Indian Penal Code while nine, who are underage, have been detained under Juvenile Act. Probe by our SIT is still underway,” news agency ANI quoted Superintendent of Police in Chatra district as saying.

Three people have been arrested under provisions of IPC; Nine who are underage have been detained under Juvenile Act. Probe by our SIT is still underway: Superintendent of Police Chatra, #Jharkhand on #CBSEPaperLeak pic.twitter.com/gAg1TrmALP

2. Protests in Delhi: Angry students protested against the leaks in Delhi’s Preet Vihar and blocked traffic in the area on Saturday. A day earlier, school children and Congress youth leaders held protests in several parts of the national capital against CBSE board papers being leaked. 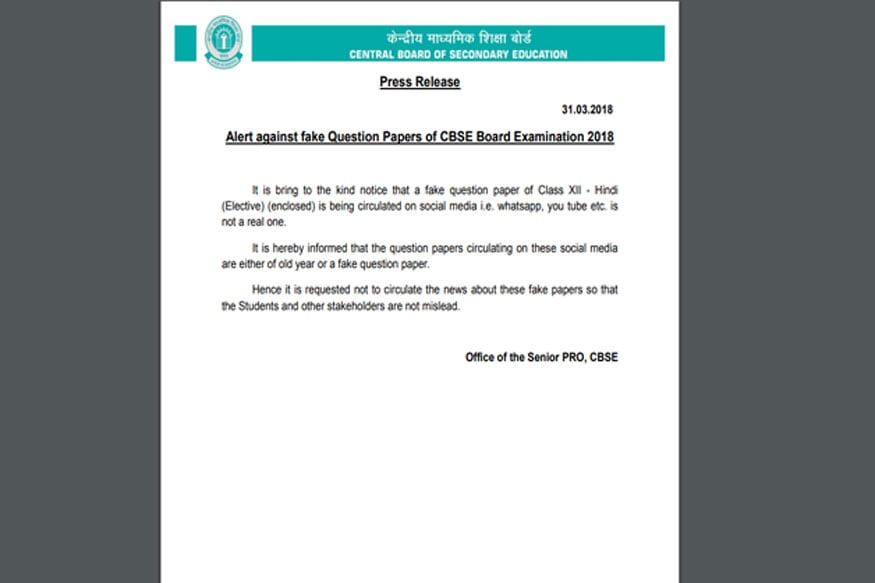 6. ‘Maths paper leaked only in Delhi, Haryana’: The education secretary said that the leak of the Maths paper was restricted to only Delhi and Haryana, but a retest, if conducted, would not be held before July.

8. Parents’ Association to file petition: The All India Parents Association said it would file a petition in the Delhi High Court on Monday seeking a court-monitored probe into the matter.

9. Opposition on CBSE papers leak: Maharashtra Navnirman Sena (MNS) chief Raj Thackeray asked students and parents to boycott re-examination and said that it was government’s mistake and they should pay for it, not the students. Rahul Gandhi had earlier attacked the PM, saying that he is a "weak watchman" as there were leaks in everything.