Prime Minister Narendra Modi reached the Palam airport here on Thursday and paid his homage to Chief of Defence Staff General Bipin Rawat, his wife Madhulika Rawat and 11 other armed forces personnel who lost their lives in the military chopper crash near Coonoor in Tamil Nadu on Wednesday. At 7:46 pm, the mortal remains of the crash victims were brought to the Palam airport from the Sulur air base near Coimbatore. Indian Air Force chief Air Read More

PM Pays Tribute to Gen Bipin Rawat, His Wife, 11 Others

3 Service Chiefs Pay Last Respects to CDS Rawat and Others PM Modi arrives at Palam airport to pay respect to CDS General Bipin Rawat and others killed in chopper crash.

Rajnath Singh Meets Families of CDS Bipin Rawat and Others 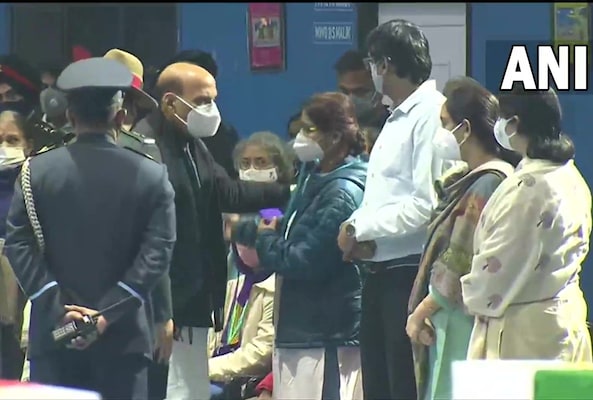 Bodies of Gen Rawat, Wife and 2 Others Identified So Far

Defence Minister Rajnath Singh has arrived at Palam airport to pay tributes to the families of Gen Bipin Rawat and 12 others who lost their lives in helicopter crash.

National Security Advisor Ajit Doval at Palam airbase, where mortal remains of CDS General Bipin Rawat, his wife Madulika Rawat and 11 others who lost their lives in military chopper crash yesterday, have been placed. 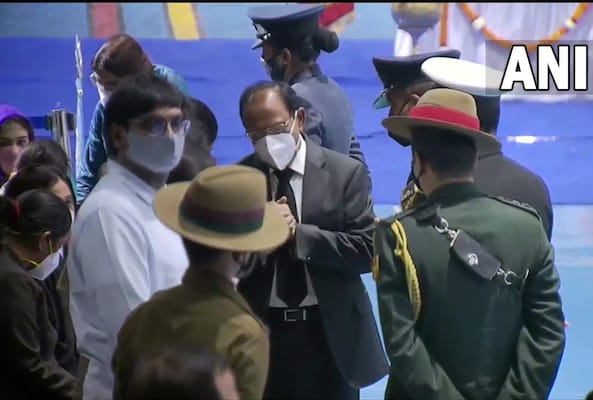 Families Pay Tribute to CDS General Bipin Rawat and Others

The mortal remains of #CDSGeneralBipinRawat, his wife Madulika Rawat and 11 others, who lost their lives in #TamilNaduChopperCrash yesterday, placed at Palam airbase. Their families pay last respects. pic.twitter.com/SZz2vn7K6p

Here is the schedule of the last journey of CDS General Bipin Rawat:

The mortal remains of Lance Naik Vivek Kumar being kept at Palam airbase. 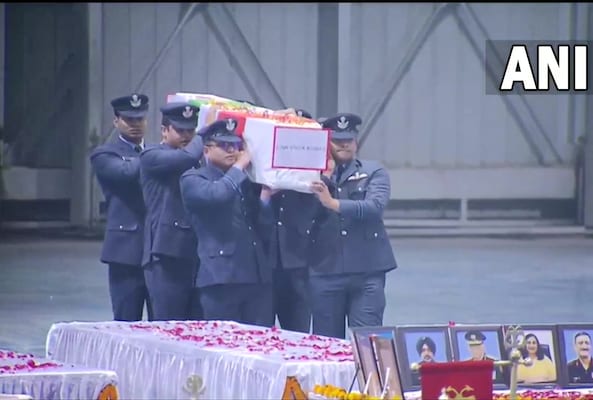 Mortal Remains of Madhulika Rawat Being Kept at Palam Airbase

The mortal remains of Madhulika Rawat, president of the Army Wives Welfare Association and wife of late CDS General Bipin Rawat, being kept at Palam airbase.

#TamilNaduChopperCrash | The mortal remains of Madhulika Rawat, president of the Army Wives Welfare Association and wife of late #CDSGeneralBipinRawat, being kept at Palam airbase. pic.twitter.com/e2KHDaEuwU

Oppn Suspends Dharna for Day, Condemns Govt for Not Allowing Them to Pay Tribute

Opposition parties on Thursday suspended for a day their dharna at Mahatma Gandhi statue inside Parliament complex against the suspension of 12 Rajya Sabha MPs in view of the death of Chief of Defence staff Gen Bipin Rawat and 12 others in a chopper crash. Leaders of the parties, however, condemned the government for not allowing them to pay tribute to the top-most defence officer in the country inside Parliament after Defence Minister Rajnath Singh briefed both the Houses about the Wednesday incident. The Trinamool Congress also staged a walkout in the Rajya Sabha in protest as its MPs were not allowed to speak and pay tribute to Gen Rawat in the House.

Last rites of Brig LS Lidder are planned at the Brar Square Crematorium, Delhi Cantt at 9am on Friday.

As the nation mourns the sudden demise of Chief of Defence Staff (CDS) General Bipin Rawat in a military helicopter crash, the question of who will fill Rawat’s big boots is on everyone’s minds. Top sources had told News18 that the post will be filled in the next seven to ten days and the frontrunners for the same are Chief of Army Staff (COAS) General Manoj Mukund Naravane and former IAF chief Air Chief Marshal RKS Bhadauria (Retd). As per the rules, any Commanding officers or flag officers of the armed forces are eligible for the position.

3 Service Chiefs Pay Last Respects to CDS Rawat and Others

Rajnath Singh Meets Families of CDS Bipin Rawat and Others

Bodies of Gen Rawat, Wife and 2 Others Identified So Far

PM Modi to Pay Respects to Bipin Rawat at 9pm

A team of Forensic Science Department Arrives at Crash Site

Spoke to Them Only Last Evening, Says CDS Rawat’s Brother-in-law as Family is Asked to Reach Delhi

Gen Rawat Was Strong Pproponent of India-US Defence Partnership: US

Chief Marshal VR Chaudhari brought the mortal remains of all the deceased.

The military aircraft carrying the mortal remains of CDS General Bipin Rawat and twelve others has left Sulur Air Force Base and will be reaching Delhi at 7:30pm. Prime Minister Narendra Modi and Defence Minister Rajnath Singh will be present at the Palam airport. The families of the deceased personnel have also arrived in Delhi, army sources said. Meanwhile another aircraft carrying Group Captain Varun Singh is headed for Bangaluru.

Defence Minister Rajnath Singh today informed Parliament about the demise of Chief of Defence Staff Bipin Rawat, his wife and 11 other defence officials in a helicopter crash in Tamil Nadu. Addressing the Lok Sabha, Singh said the CDS was on a scheduled visit to Defence Services Staff College, Wellington, to interact with the student Officers. “The Air Force Mi 17 V 5 helicopter took off from Sulur Air Base at 11:48 AM yesterday and was expected to land at Wellington by 12:15 PM. Air Traffic Control at Sulur Air Base lost contact with the helicopter at approximately 12:08 PM. Subsequently, few locals spotted a fire in the forest near Coonoor and rushed to the spot where they observed the wreckage of military helicopter engulfed in flames. Rescue teams from the local administration in the vicinity reached the site and attempted to recover the survivors from the crash site,” he added.

The mortal remains of the Chief of Defence Staff (CDS) Bipin Rawat and his wife, Madhulika Rawat are expected to arrive in Delhi on a military plane by Thursday evening.

Over the sudden demise of India’s chief of defence staff, the Uttarakhand government has declared a three-day state mourning from December 9. Meanwhile, Congress President Sonia Gandhi has appealed to the party workers to not celebrate her birthday on Thursday and leaders from across the globe-. The United States, Russia, China and Pakistan expressed their condolences over the demise of Gen Rawat.

The plane crashed 10 minutes before, which was on its way to the Defence Services Staff College in Wellington to attend a programme. The Chief of Defence Staff had left the Palam airbase in an IAF Embraer aircraft at 8:47 am and landed at Sulur airbase at 11:34 am. He took off from Sulur in a Mi-17V5 chopper at around 1148 am for Wellington, PTI reported. The chopper crashed around 12.22 pm. Rawat had survived a helicopter crash six years ago, in 2015, when he was a Lt General.

The IAF has also ordered a probe into the crash as there is no information on what led to the crash. The Mi17V5 helicopter is an advanced military transport chopper with the Indian Air Force since 2012. Wing Commander Prithvi Singh Chauhan was the pilot of the chopper.