The senior-most judge of the Supreme Court is appointed by the CJI, and Justice Ranjan Gogoi by virtue of his seniority, is next in line.

On Saturday, CNN-News18 was the first to report about Justice Misra having endorsed the name of the senior-most judge Justice Gogoi, putting to rest all speculations around the next CJI. Justice Dipak Misra, in line with the principle of seniority, has cleared Justice Gogoi as his successor.

Sources confirmed that the formal letter of recommendation has now been sent to the Union Law Ministry for further processing of the file, in line with the convention. According to the convention, the senior most judge of the Supreme Court is appointed by the CJI, and Justice Gogoi by virtue of his seniority, is next in line.

Last week, the law ministry had sent a formal letter to Justice Misra, seeking the name of his successor. Justice Misra retires on October 2. As per the convention, the outgoing CJI has to send his recommendation around a month before the end of his tenure.

In the Second Judges Case in 1993, the majority had held that appointment to the office of the CJI should be of the senior-most Judge of the Supreme Court "considered fit to hold the office".

Justice Gogoi was one of the four Supreme Court judges who held the unprecedented press conference in January this year, raising concerns about the administration of the apex court and the independence of the judiciary.

This unparalleled event fuelled the speculation if Justice Misra, who was tacitly under attack for administration of the Supreme Court, would still recommend Justice Gogoi as his successor. There were speculations in the legal circle that Justice Gogoi could be superseded. 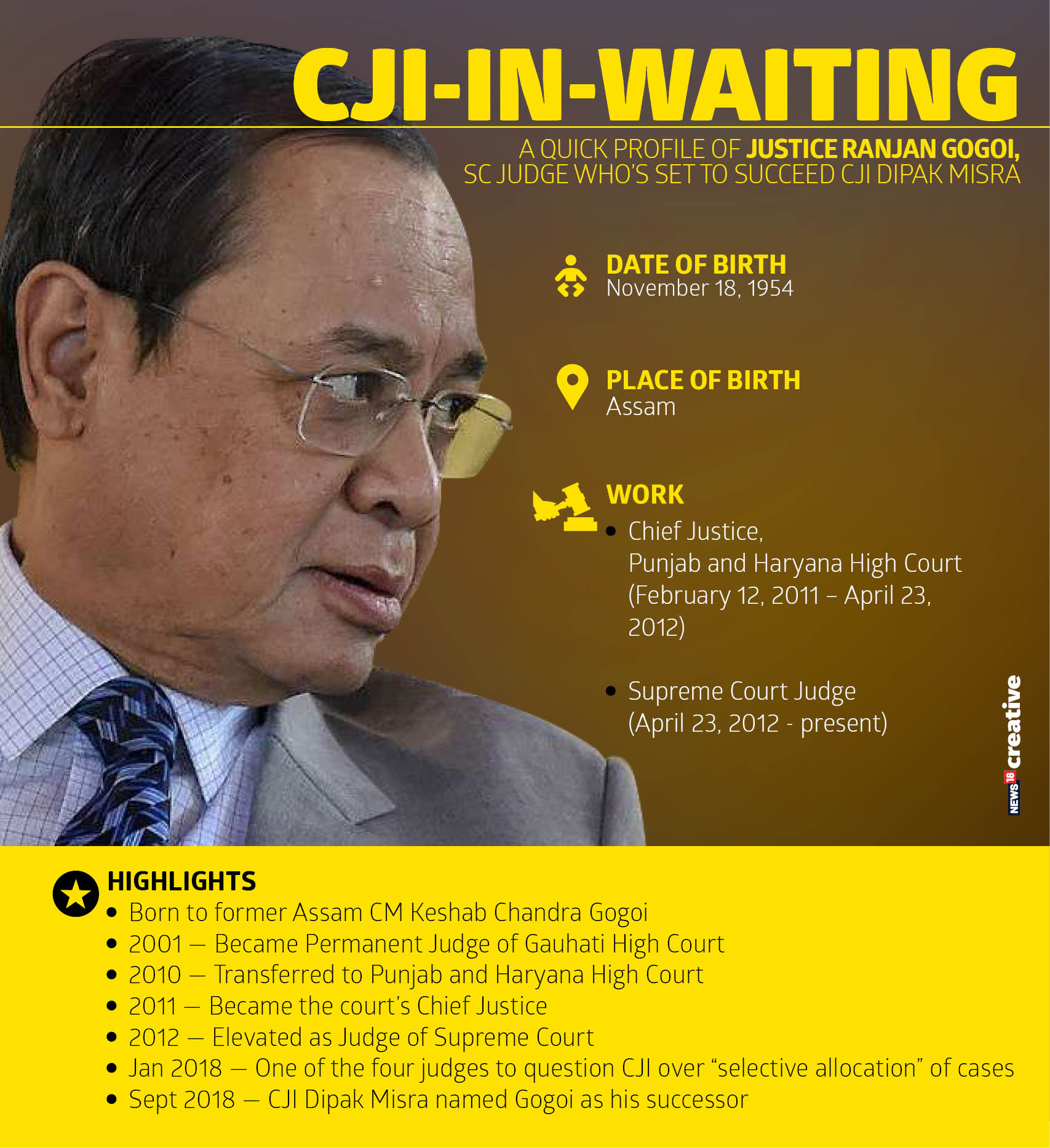 Justice Gogoi is from Assam and headed the special bench that is monitoring the updation of National Register of Citizens to identify citizens and weed out illegally settled foreigners. He has been part of a body of important judgments and orders in the top court.

His bench has been taking stock of the progress being made to appoint the Lokpal and Lokayuktas. In one of his rulings, Justice Gogoi put curbs on public advertisements for glorifying politicians and laid down new norms.

In Justice Karnan's contempt case, Justice Gogoi, along with Justice (since retired) J Chelameswar, had highlighted the necessity of revisiting the existing system of appointing changes and bringing in necessary reforms to keep the public confidence intact in the judiciary.

Justice Gogoi, in another verdict, had also implored upon the government to redefine parameters of determining backwardness so that those really underprivileged and economically poor get the benefits.