Coronavirus Pandemic LIVE Updates: As Coronavirus cases climbed to 396 on Sunday, India prepared for an extended lockdown as 13 states announced a complete lockdown till the end of the month and the Centre announced a lockdown in 80 of the most affected districts across India.

The shutdown is part of an effort to break the chain of transmission, said the Health Ministry even as the death toll rose to seven as three patients – one each in Gujarat, Maharashtra and Bihar died.

Nagpur police took action against 878 persons for various violations during Sunday's Janta curfew. The owners of 35 establishments were booked for keeping them open despite lockdown orders, police said.

No More Than 2 People to Gather in Germany | Germany bans gatherings of more than two to control virus spread, says its chancellor Angela Merkel.

West Bengal medical officers examined passengers of two special trains from Maharashtra at the Howrah and Kharagpur railway stations. Chief Minister Mamata Banerjee had on Saturday alleged that the Railways was not ensuring proper screening of passengers entering the state through long-distance trains.

3,938 Under Observation in J&K | Jammu and Kashmir has reported four positive coronavirus cases so far, while 3,938 people including those who returned to the Union Territory from outside and those who came in contact with individuals suspected of having the infection have been put under observation, the local government said.

Envoy to UK Reassures Indians | India's envoy in the UK on Sunday called on Indian citizens stranded in Britain due to the travel restrictions back home to fight the coronavirus pandemic and act responsibly during these "trying times". High Commissioner Ruchi Ghanashyam sought to reassure Indians worried about their immigration status due to expiring visas, saying that the Indian authorities have been in contact with their UK counterparts, who have said that no one will be "unfairly penalised" for events beyond their control as a result of COVID-19.

Andhra Govt Announces Economic Relief | For all those who depend on daily wages to make ends meet will receive a sum of Rs 1,000 from the government in order to help them cope with the testing times and loss of income. A total of Rs 1,500 crore has been sanctioned for the same.

Punjab CM Writes to Centre | Punjab chief minister Amarinder Singh seeks an economic package from the Centre to mitigate the effect of COVID-19 on the vulnerable. He writes to Narendra Modi, Finance Minister Nirmala Sitharaman for support to MSMEs, business enterprises and organised and unorganised labour. He urges the Centre to double and immediately distrubute food grains under the National Food Security Act.​ He also calls for guaranteed wages for MNREGA workers, extension in GST return dates and a cut in industry rates, etc.

Kolkata Airport confirms that it will be operational for all domestic flights.

Parliament to be Adjourned Sine Die Tomorrow: Sources | The Parliament will be adjourned sine die tomorrow, without fixing a future date on which it will reconvene. Both Lok Sabha and Rajya Sabha will pass the Finance Bill tomorrow and will convene at 2pm tomorrow. Government sources said, "We are forced to shut the Parliament and with lockdown in most states, we have no option."

Buses of Uttar Pradesh Roadways will neither go out from UP nor will buses from other states will arrive to these districts. All the services for supplies of food grains, milk, vegetables and medicine will remain open during lockdown. Perform religious rituals at home, avoid visiting the temples, mosques and gurudwaras: Uttar Pradesh CM Yogi Adityanath.

Kudos to @airindiain and their valiant staff for working selflessly and tirelessly in the face of adversity, every time the country needs them!#CoronavirusPandemic #CoronavirusIndia https://t.co/8KojQ4OcsP

Beijing to Divert All International Flights | China will redirect all arriving international flights from its capital Beijing to 12 other cities from Monday to control the surge of imported coronavirus cases as the country reported its first domestically transmitted COVID-19 case after a gap of three days, officials said.

The Gorakhpur and Meerut medical colleges have been authorised by the Indian Council for Medical Research to conduct tests for coronavirus infections in the state, Uttar Pradesh Health Minister Suresh Khanna said.

Pak Rules out Complete Lockdown | Pakistan Prime Minister Imran Khan ruled out complete lockdown in the country, saying it will create chaos and urged people to self-quarantine to curb the spread of the coronavirus, which has so far claimed four lives and infected 646 people in the country. He reiterated that lockdown will create chaos as more than 25 per cent people were living below the poverty line and their lives will be shattered.

From one case to 300+, how COVID-19 infection cases have spiked in India: 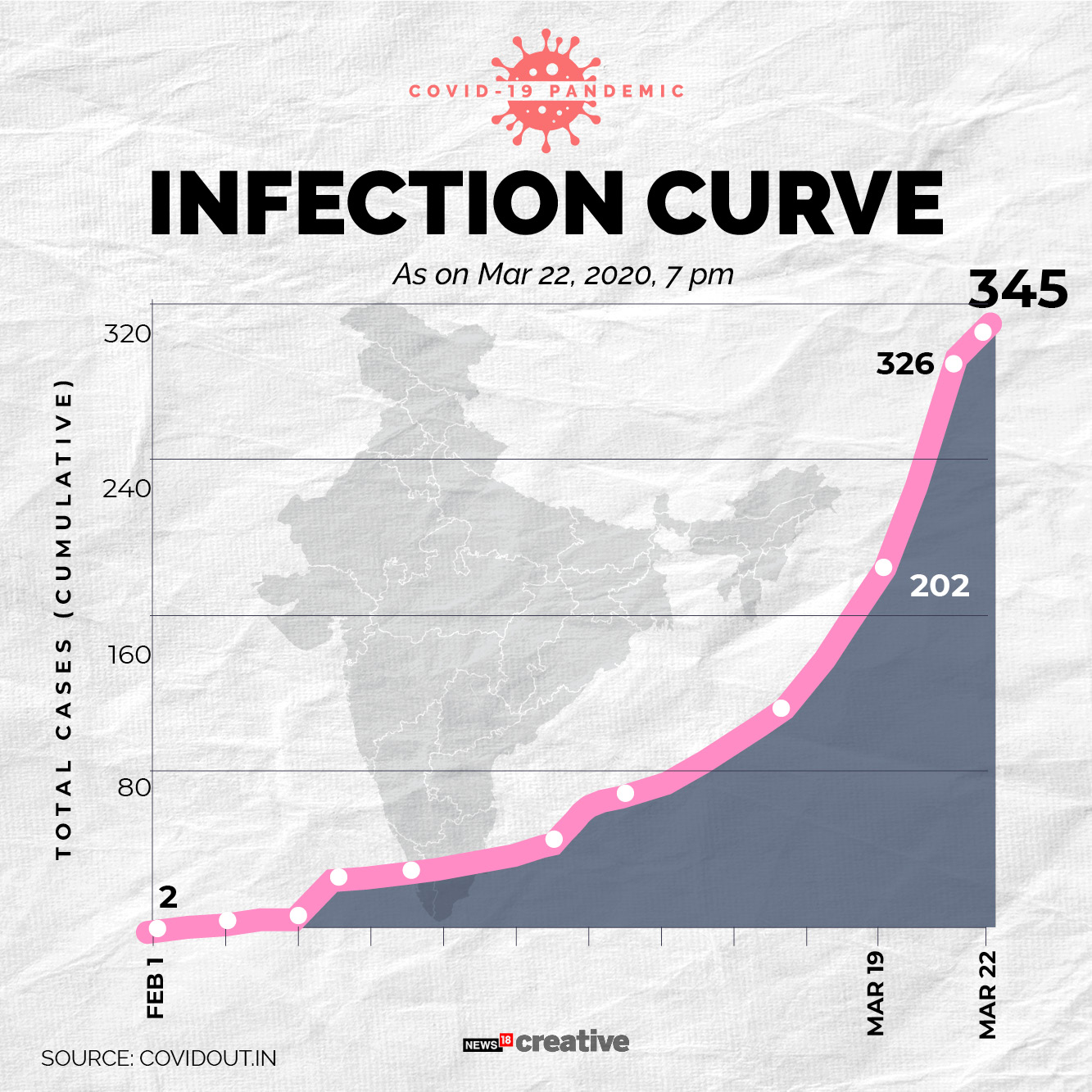 Bangladesh Pledges $1.5 Mn to SAARC Fund | Bangladesh pledges to contribute $1.5 million to the SAARC Emergency Fund for coronavirus proposed by Narendra Modi with an initial offer of $10 million from India to help combat the fast-spreading COVID-19 pandemic in the region.

Domestic Flights To & From IGIA to Continue: DGCA | Domestic flights to and from the Indira Gandhi International Airport in Delhi will continue to operate and the airport will remain functional, the Directorate General of Civil Aviation said.

Pope Francis said he will this week deliver an extraordinary "Urbi et Orbi" (to the city and the world) blessing - normally given only at Christmas and Easter - and called for worldwide prayer to respond to the coronavirus crisis. Francis made the surprise announcement in his weekly Angelus message, which he has been delivering from inside the Vatican over the internet and television instead of before crowds in St. Peter's Square.

People clap and bang utensils from their balconies to cheer for emergency personnel and sanitation workers who are on the frontlines in the fight against coronavirus, in Mumbai. (Reuters)

We will decide on nominal rates for groceries, vegetables and dairy products. If some vendor is found selling items for a higher rate than the prescribed one, stringent action will be taken against them: Jagan Mohan Reddy.

IAF HQ Reduce Manpower by Around 50% | Indian Air Force has reduced manpower in IAF Headquarters by almost 50% in view of the coronavirus pandemic. The number of officers would also be reduced by 25-30%: Indian Air Force officials.

Andhra Moving Towards Lockdown: Jagan Reddy | Andhra Pradesh is moving towards a lock down. All Public Transport will be shut, unless in emergency cases. Non essential and commercial shops will be shut till march 31: Andhra CM Jagan Mohan Reddy.

Six New Cases in Karnataka Today | Karnataka reported six new cases today. Three were from Bengaluru, and one each from Mangalore, Chikkaballapur and Dharwad. Except the Chikkaballapur case, all others had returned from abroad.

A young Buddhist nun is measured the body temperature by a member of Yangon City Development Committee during a public awareness for prevention of the novel coronavirus at a market in Yangon, Myanmar. (AP photo) 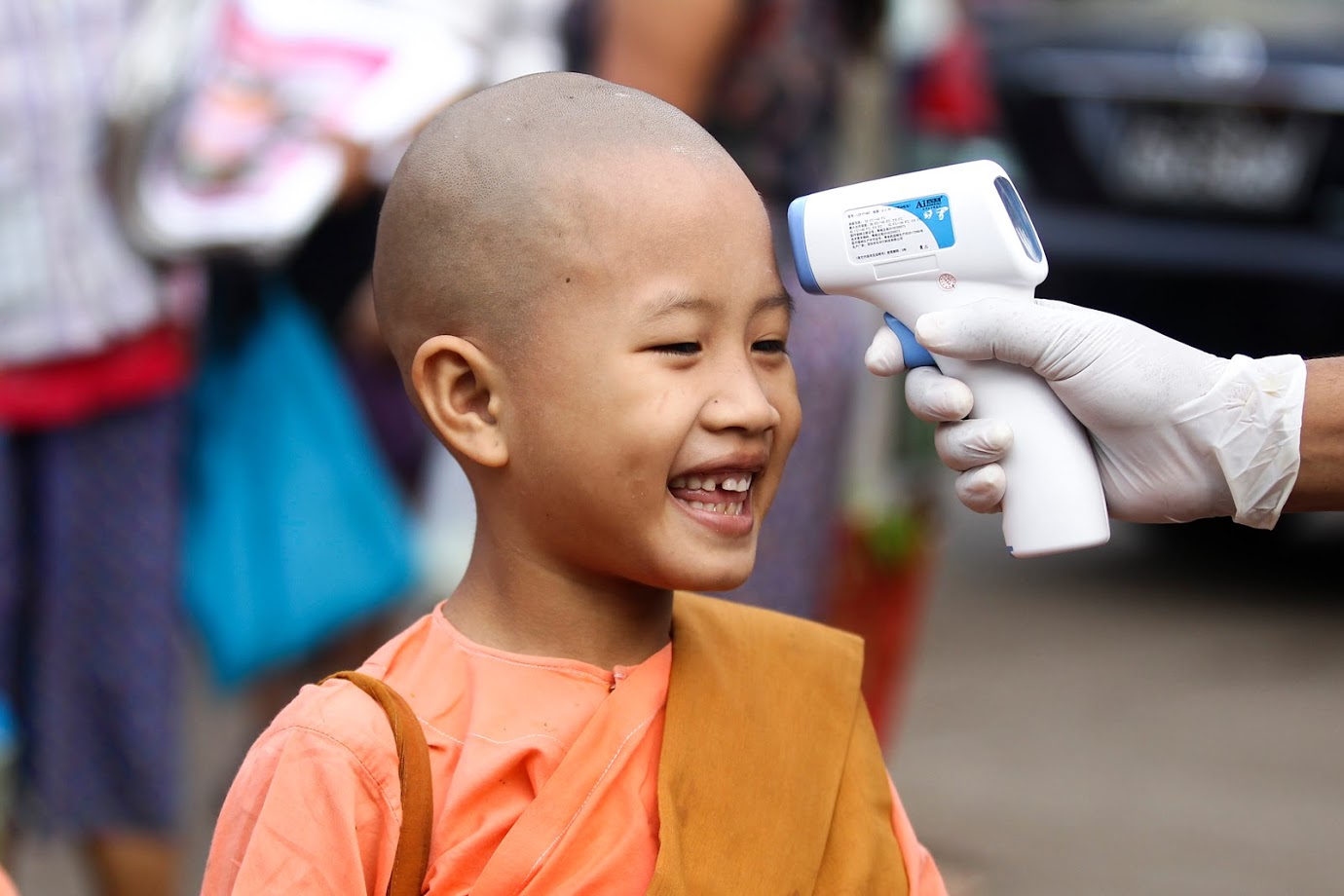 Priyanka Gandhi thanks doctors, nurses, technicians, bio- technicians, medical workers, support staff & healthcare volunteers who have worked on the frontline of the fight against coronavirus.

Both Government and Private sector should pay it's employees the salary during the lock down period. We are shutting down Anganwadis. However, we're working on how to get meals to the kids: Telangan chief minister KCR

A deserted gateway of India in Mumbai.

Nearly one billion people around the world have been confined to their homes on Sunday, as the coronavirus death toll crossed 13,000 and factories were shut in worst-hit Italy after another single-day fatalities record.

The raging pandemic has forced lockdowns in 35 countries, disrupting lives, travel and businesses as governments scramble to shut borders and unleash hundreds of billions in emergency measures to avoid a widespread virus-fuelled economic meltdown.

More than 300,000 infections have been confirmed worldwide, with the situation increasingly grim in Italy where the death toll spiked to more than 4,800 -- over a third of the global total.

Prime Minister Giuseppe Conte announced a closure of all non-essential factories in a late-night TV address on Saturday.

The Mediterranean nation of 60 million is now the epicentre of the disease, which first emerged in central China late last year before marching out to the rest of the world.

Italy has now reported more deaths than mainland China and third-placed Iran combined, and it has a death rate of 8.6 percent among confirmed COVID-19 infections -- significantly higher than in most other countries.

Across the Atlantic, more than a third of Americans were adjusting to life in various phases of lockdown, including in New York, Chicago and Los Angeles. Other parts of the United States are expected to ramp up restrictions as well.

"This is a time of shared national sacrifice, but also a time to treasure our loved ones," US President Donald Trump said. "We're going to have a great victory."

As world leaders have vowed to fight the pandemic, the number of deaths and infections has continued to rise, especially in Europe -- now the main coronavirus hotspot.

Spain reported a 32 percent spike in new deaths on Saturday, with Prime Minister Pedro Sanchez warning that the nation needs to prepare for "very hard days ahead".

Fatalities in France jumped to 562 as police officials said helicopters and drones were being deployed to boost the government's attempts to keep people in their homes.

The unprecedented measures to counter the spread of COVID-19 have shredded the international sports calendar, and pressure is mounting on Olympic organisers to postpone the 2020 Tokyo Games.

The pandemic has bludgeoned global stock markets, and the United States -- the world's biggest economy -- is preparing a huge emergency stimulus package that could top $1 trillion.

Millions have been ordered to stay home in the United States.

And in neighbouring New York, Governor Andrew Cuomo warned that the disruption is likely to last for months, not weeks.

"I don't think it's possible in a city of this size for people to maintain it for much longer than three weeks before they start losing it," Yona Corn, a 35-year-old singer, told AFP.

"I think there's going to be a big mental health crisis. I worry about what's going to happen to people." The US Food and Drug Administration also approved the first coronavirus test that can be conducted entirely at the point of care for a patient -- and deliver results in 45 minutes.

Vice President Mike Pence and his wife tested negative for the coronavirus, his press secretary tweeted Saturday. The couple had taken the test after one of Pence's staffers contracted the illness.

The drastic confinement measures follow the example of China, where the lockdown of Hubei province appears to have paid off. Wuhan, Hubei's capital, is where the virus was first detected.

France, Italy, Spain and other European countries have ordered people to stay at home, threatening fines in some cases, while Australia on Sunday told citizens to cancel domestic travel plans.

Britain has told pubs, restaurants and theatres to close and warned citizens to stop panic-buying.

China reported its first local infection in four days on Sunday. While the number of cases in the mainland has slumped dramatically since the crisis began, there are fears in Asia of "imported" cases from other hotspots like Europe.

Thailand on Sunday reported its highest daily rise in cases, taking its total to nearly 600, while India went into lockdown with a one-day nationwide "self-imposed curfew".

While the elderly and those with pre-existing medical conditions are the hardest hit by the virus, the WHO has warned that young people are also vulnerable.

Accurate COVID-19 figures are difficult to reach because many of the victims suffered from other illnesses, and infection rates are uncertain because of a lack of testing in many countries.

The coronavirus has infected more than 1,000 across Africa too, where healthcare systems are limited and social distancing measures are difficult in crowded cities.

The Middle East also remains on high alert, where Iran -- which suffered a major outbreak -- reported 123 deaths on Saturday. But the Islamic Republic has refused to join the rest of the world in imposing heavy restrictions.