»»»India Reports 9,419 Cases in 24 hours; Omicron Now in 57 Countries, Could Have Major Impact on Pandemic, Says WHO

India Reports 9,419 Cases in 24 hours; Omicron Now in 57 Countries, Could Have Major Impact on Pandemic, Says WHO

As the Omicron variant of Covid-19 spreads, WHO officials say that boosters aren't useful in countries with large vaccine supplies but where up to 50% of people have not gotten vaccinated. 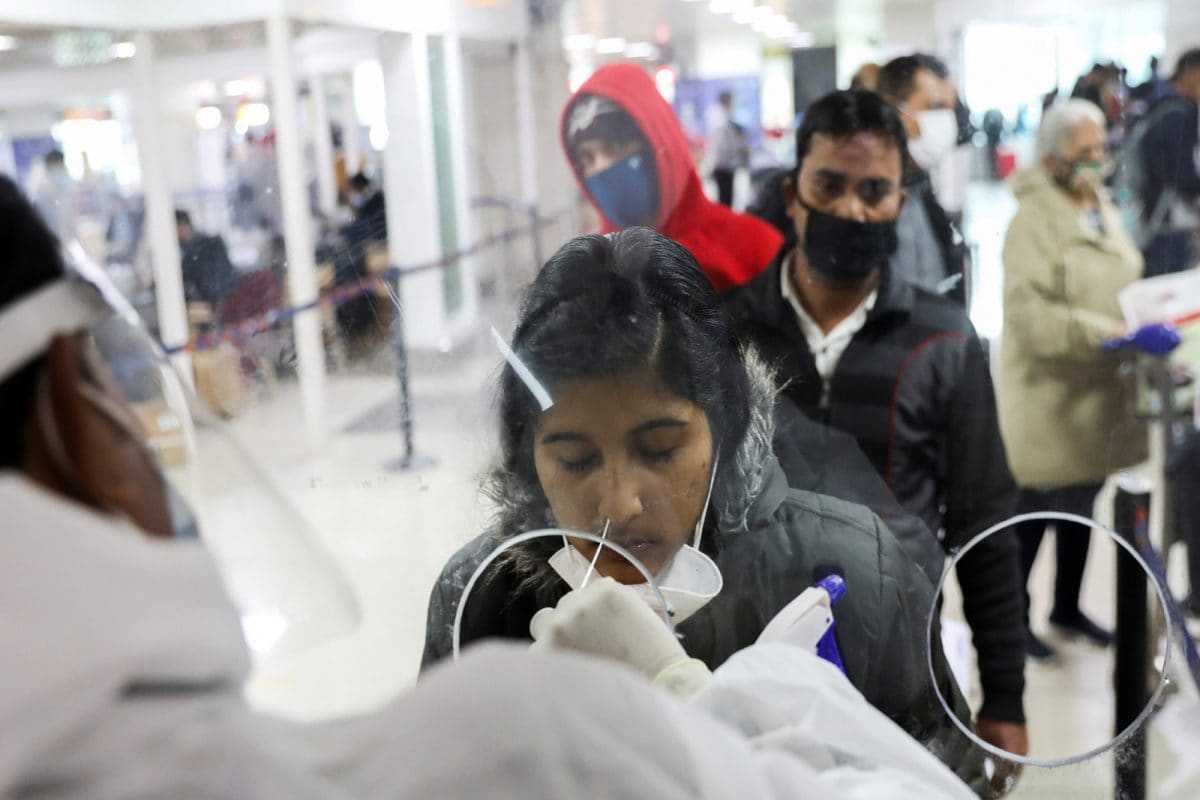 The World Health Organization says early evidence suggests the omicron variant may be spreading faster than the highly transmissible delta variant but brings with it less severe coronavirus disease though it’s too early to make firm conclusions. The comments come among swirling concerns about the new variant that first emerged in southern Africa last month, prompting some countries to shut their borders and rattling stock markets fearful of Read More

Biopharmaceutical multinational AstraZeneca on Thursday said it has initiated engagements with Indian health authorities to provide the latest evidence of Evusheld, its COVID-19 prevention drug for people with weakened immune system which has received emergency use authorisation (EUA) in the US. The long acting antibody combination has been granted the EUA in the US for COVID-19 prevention in adults and adolescents (above 12 years and weighing 40kg or more) with moderate to severely weakened immune system who may not have an adequate immune response to COVID-19 vaccination, as well as those individuals for whom COVID-19 vaccination is not recommended, the company said.

Singapore removed from the list of 'at risk' countries

Singapore removed from the list of ‘at risk’ countries from where travellers would need to follow additional measures on arrival in India, including post-arrival testing. 12 countries including South Africa, Botswana and China are on the list. 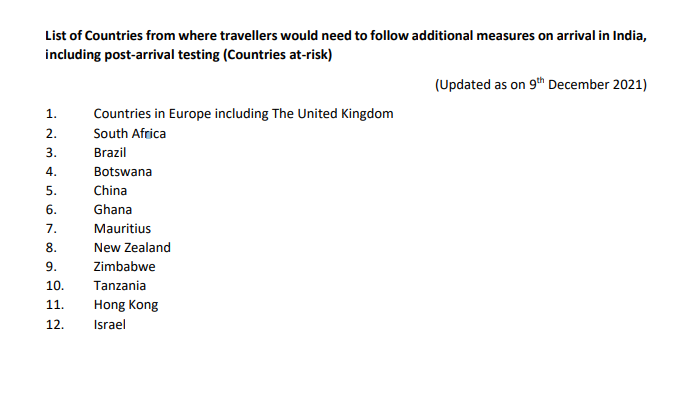 Union Health Secy today reviewed public health response to COVID-19 in light of the emergence of Omicron & progress of vaccination with States/UTs. He also urged the States to ensure to maintain adequate buffer stock for 8 critical drugs identified in clinical treatment COVID19.

WHO vaccine director Kate O’Brien says as we head into omicron, there is risk that global supply will revert to high-income countries hoarding vaccine.

Press Briefing on Vaccine Rollout and Impact of Omicron Variant

📺 LIVE: Watch this @WHOAFRO press briefing on vaccine rollout and impact of the #Omicron variant on the #COVID19 pandemic in Africa. Dr @RichardMihigo is joined by Dr @christian_happi. https://t.co/cRCE6e0Irb

Despite providing more than 130 crore doses of Covid-19 jabs, India is set to miss the deadline to vaccinate all eligible population by the year-end. Adding to the woes is the fear of a fresh wave with the Omicron variant detected last month. Amid all this, several local bodies across India are giving a push to the vaccination drive by offering incentives ranging from free electronics and mobile phones in lucky draws to discounts in petrol and medicine prices.

In the wake of new COVID-19 clusters emerging and the threats of the new Omicron variant of coronavirus, the Karnataka government on Thursday decided to focus on cluster management and to issue fresh guidelines to hostels, aimed at controlling spread of the infection. Not wanting to take any “hasty decision” regarding imposing curbs, it said, a decision regarding such measures like night curfew and restrictions on Christmas and New Year celebrations will be taken after analysing the situation for a week.

Odisha logged 195 new coronavirus cases, taking the tally to 10,50,955 on Thursday, a Health Department bulletin said. The COVID-19 toll rose to 8,428 as a person each from Khurda and Kendrapara districts succumbed to the pathogen. Fifty-three other Covid patients have died due to comorbidities so far, according to official data.

Uncertainty Over Omicron Spread: What Are WHO's Major Concerns Over New Coronavirus Variant?

The World Health Organization, in its latest epidemiological update, said there was early evidence that the Omicron variant of the novel coronavirus might be spreading faster than the highly transmissible Delta variant. But, it was, however, too early to say if it was as deadly. READ MORE

Antibody levels are higher when people receive the COVID-19 vaccine in the afternoon as compared to the morning, according to an observational study. The research, published in the Journal of Biological Rhythms, demonstrates that our internal 24-hour circadian clock regulates many aspects of physiology, including the response to infectious disease and vaccination. “Our observational study provides proof of concept that time of day affects immune response to SARS-CoV-2 vaccination, findings that may be relevant for optimising the vaccine’s efficacy,” said study co-senior author Elizabeth Klerman from Massachusetts General Hospital (MGH), US. The researchers noted that symptoms of some diseases and the action of numerous medications vary by time of day.

Mizoram’s COVID-19 caseload mounted to 1,37,377 on Thursday with 320 new infections, while one more death pushed the toll to 509, a health department official said. The latest fatality was reported from Saitual district, where a 99-year-old woman, who had been placed under home isolation, succumbed to the virus, he said. The number of active cases now stands at 3,049, and 1,33,819 people have recovered from the disease so far, including 309 since Wednesday.

#OnThisDay a year ago 🇬🇧 made history by administering the first approved #COVID19 vaccines, a scientific and public health feat. But many #healthworkers and at-risk individuals still await primary doses around the world. Let’s stand up for #VaccinEquity!

Australia's Deputy Leader Tests Positive for Virus in the US

Australia’s Deputy Prime Minister Barnaby Joyce said Thursday he’d tested positive for the coronavirus while traveling in Washington D.C. Joyce, who is fully vaccinated, said in a Facebook post that he’d been experiencing mild symptoms and decided to get tested. He said he would remain in isolation while seeking further advice. He said the remaining members of his traveling delegation had tested negative.

Three more persons tested positive for COVID-19 in Arunachal Pradesh on Thursday, raising the caseload to 55,298, a senior health department official said. The death toll remained unchanged at 280 as no fresh fatality was reported in the past 24 hours, State Surveillance Officer (SSO) Lobsang Jampa said. The frontier state now has 29 active cases, while 54,989 patients have recovered from the disease, including five since Wednesday. West Kameng district has the highest number of active cases at 13, followed by the Capital Complex Region comprising Itanagar, Naharlagun, Nirjuli and Banderdewa areas (9), and Tawang (4).

The global coronavirus caseload has topped 268 million, while the deaths have surged to more than 5.27 million and vaccinations to over 8.28 billion, according to Johns Hopkins University. In its latest update on Thursday morning, the University’s Center for Systems Science and Engineering (CSSE) revealed that the current global caseload and the death toll stood at 268,091,135 and 5,278,886, respectively, while the total number of vaccine doses administered has increased to 8,284,831,624.

As many as 23 persons have tested positive for Covid-19 at the Tibetan Lama Camp in Bylakuppe in Mysuru district in the last 24 hours. The residential camp has been sealed and all the Covid positive patients have been isolated. Health Officer Dr Sharath visited the Tibetan camp to take stock of the situation. Directions have been given for the officers at the settlement to initiate further precautions to contain the spread of the Coronavirus in the camp.

As India achieves the feat of administering more than 130 crore vaccine doses to its eligible adult population, most of the northeast districts are still lagging in inoculating even 50% of their people with the first dose of Covid vaccine. Since the beginning of Covid vaccination drive in January, more than 85% of Indians have been partially vaccinated. READ MORE

Bruhat Bengaluru Mahanagara Palike (BBMP), the civic agency of Silicon Valley, is worried as people are not responding and turning out to get Covid vaccination done in spite of the repeated appeals being made by various government authorities in the wake of Omicron variant concerns. The BBMP, which had set an ambitious target of jabbing 4.5 lakh people in Bengaluru on Wednesday, was able to administer only 71,302 people. The health department sources said that the people of Bengaluru are aware of the prevailing Covid situation and suffered most during the outbreak of the second wave. Despite this, they are being negligent in getting vaccinated.

The daily rise in new coronavirus infections has been recorded below 10,000 for 13 straight days and less than 50,000 for 165 consecutive days now. The active cases have increased to 94,742 comprising 0.27 per cent of the total infections, the lowest since March 2020, while the national COVID-19 recovery rate was recorded at 98.36 per cent, the highest since March 2020, the Health Ministry said.

WHO Says Emerging Data on Omicron Suggests Risk of Reinfection

the long-term impact of a possible new variant of the virus that has already infected at least 267 million people and killed more than 5.2 million.

Meanwhile, WHO officials stuck to their stance that giving booster shots to people who are already vaccinated should be a secondary priority to getting first doses into the arms of people in places that have relatively little vaccination coverage.

Dr. Rochelle Walensky, director of the Centers for Disease Control and Prevention, told Associate Press that the data is very limited and the agency is working on a more detailed analysis of what the new mutant form of the coronavirus might hold for the U.S. But the disease is mild in almost all of the cases seen so far, she said, with reported symptoms mainly cough, congestion and fatigue. One person was hospitalized, but no deaths have been reported, CDC officials said.

Maharashtra’s first patient of the Omicron variant of coronavirus, who resides in Thane district, was on Wednesday discharged from a hospital after testing negative for the infection, a civic official said. The patient, a 33-year-old marine engineer from Kalyan Dombivli municipal area, had arrived at the Delhi airport from South Africa via Dubai in the last week of November. The state now has 10 cases of Omicron variant.

Britain recorded 131 new cases of the Omicron COVID-19 variant on Wednesday, taking the total to 568, as it emerged that government ministers are in discussion about plans for tougher rules in an effort to slow the spread of the highly transmissible variant first detected in South Africa.

According to reports emerging from ministerial quarters, Prime Minister Boris Johnson may decide to move the country to the so-called Plan B winter strategy of dealing with COVID-19 which would see people being directed to work from home, compulsory face masks in all settings and vaccine passports for entry to most venues. The government has so far stopped short of enforcing Plan B and issued guidelines for compulsory face masks on transport and some indoor settings, such as shops.