Coronavirus Pandemic LIVE Updates: External Affairs Minister S Jaishankar on Tuesday said that the mantra for economic relief is "be vocal about local". His tweet came minutes after emphasized on self-reliance.

Coronavirus Pandemic LIVE Updates: External Affairs Minister S Jaishankar on Tuesday said that the mantra for economic relief is "be vocal about local". His tweet came minutes after emphasized on self-reliance. "Corona crisis has also taught us the importance of local supply chains, local markets has stepped into help us. Time has taught us that we have to now think local. Even global brands were once local. When people used it, branded these products, marketed them, those products became global from local. We need to be vocal for our local products. Not just buy but also publicise them," he said.

"Whenever I have asked anything of you , you have always responded, as in the case of when I asked you to buy Khaadi. Very quickly sales peaked. It is a small example but important on what can be done. This crisis is big but we cannot allow Covid-19 to define us," the prime minister further said.

Consider Kerala's Request on Reduced Quarantine for Returnees: HC to Centre | The Kerala High Court directed the Centre to consider without delay the request made by the state government for departure from the Standard Operating Protocol set in place on the period of institutional quarantine prescribed for people travelling to Kerala from overseas and from other states. It gave the direction while considering a plea alleging that the Kerala government has diluted by seven days the Centre's directive of compulsory 14 days quarantine period.

ICMR to Conduct Survey to Estimate Prevalence of Infection | The Indian Council of Medical Research in collaboration with other key stakeholders is conducting a population-based sero survey to estimate the prevalence of coronavirus infection among the Indian population. The survey would be conducted in 69 districts of 21 states and Union Territories, the apex health research body said in a statement.

Nepal PM Calls for Strong Vigil Along Border with India | Nepal Prime Minister KP Sharma Oli has instructed authorities to intensify the vigil along the country's southern border with India due to a sudden spike in the number of coronavirus patients and directed the officials to properly manage the lockdown, Cabinet sources said.

PM Modi made an unprecedented announcement of economic package to deal with the extraordinary situation we are in today. The economic package of Rs 20 lakh crores really promises to place India back into the path of economic recovery: C Banerjee, DG, Confederation of Indian Industry.

Reservations Issued to over 1.6 Lakh Passengers | By today evening, 90,331 tickets (PNRs) had been generated and reservations were issued to 1,69,039 passengers for all the 30 trains: Railways official.

By today evening, 90,331 tickets (PNRs) had been generated and reservations were issued to 1,69,039 passengers for all the 30 trains: Railways official.

Mass Quarantining Permissible, Says Bombay HC | Individual interest must yield to larger public interest and if a situation like the outbreak of a contagious epidemic demands, then mass quarantining is permissible, the Bombay High Court said. Justice A S Kilor of the Nagpur bench of the HC was hearing a petition filed by a local resident claiming that Nagpur civic authorities had illegally detained 1,408 people from Satranjipura and Mominpura areas on the ground that they were high-risk contacts of COVID-19 patients.

Wuhan to Tets Its Entire Population | Wuhan, the Chinese city where the deadly novel coronavirus emerged in December last year, has decided to test the city's entire 11 million population after new cases were reported for the first time in weeks, sparking fears of the second wave of the virus attack.

Information on Lockdown Extension before May 18 | Based on the suggestions by states, information about the extension of lockdown will be given before 18th May. We will fight Corona and we will move forward: PM Narendra Modi. 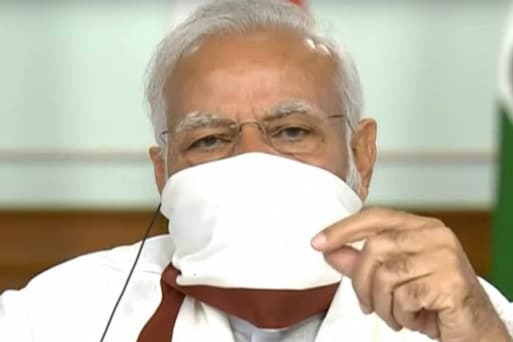 PM Modi had earlier said that the biggest challenge for the country will be to ensure that the infection does not spread to villages.

Local Has Saved Us: Modi | PM Modi propagates the use of local-made products. "Local has saved us. It is not only a necessity, it is our responsibility. Local has to become our 'jeevan mantra'. Today's global brands were once local. We should use local products and also promote them vocally," he says.

Local Has Saved US: Modi | PM Modi propagates the use of local-made products. "Local has saved us. It is not only a necessity, it is our responsibility. Local has to become our 'jeevan mantra'. Today's global brands were once local. We should use local products and also promote them vocally," he says.

Rs 20 Lakh Crore Package for Self-reliant India | An economic package of Rs 20 lakh crore in, equivalent tp 10% of India's GDP will help aid the Aatma Nirbhar Bharat Abhiyaan. Land, labour, liquidity and law has been looked at closely. MSMEs, small business, co-operative business have been given special attention in the package: PM Modi.

It has been more than four months since the world  is waging a battle against Covid-19. One virus has brought the world down to its knees. This crisis is unprecedented  but human race cannot be defeated. We must save ourselves and at the same time progress: PM Modi.

Judges May Hear Cases from Courtrooms Via VC: SC | The Supreme Court said that as part of a pilot project, the judges may come to courtrooms in the apex court premises from next week to hold judicial proceedings through video conferencing. A bench, comprising Justices L Nageswara Rao, S Abdul Nazeer and Sanjiv Khanna, was conducting hearing when Solicitor General Tushar Mehta enquired as to whether the judges were holding the proceedings from the apex court premises itself.

Not Getting Any Funds from Centre: Mamata | There are expectations during meetings with PM, but we return with an empty basket every time. There is no income since last 2 months but we are not getting any alternative from Centre. We are supposed to get Rs 52,000 crore. Covid-19 is here to stay but what about the income? We requested the Centre but it did not give us anything at all. Centre should give us at least what we deserve such as social schemes, GST. Forget about special package, we did not even get normal package: Mamata Banerjee.

As part of ‘Mission Sagar’, INS Kesari entered Port of Male, Maldives today. It carries 580 tons of food provisions for the people of Maldives: German Stranded at Delhi Airport for Over 50 Days Departs | A German national who was stranded in the transit area of the Delhi International Airport since March 18 departed early Tuesday morning to Amsterdam on a repatriation flight of the KLM Airlines, officials said. The German, who has a criminal record in his home country, was heading from Hanoi to Istanbul via Delhi on March 18.

46 New Cases, 1 Death in Dharavi | Dharavi slum sprawl in Mumbai reported 46 new COVID-19 cases and one death, taking the case count to 962 and the number of fatalities to 31, a Brihanmumbai Municipal Corporation (BMC) official said.

NHRC Issues Notices over Alleged Negligence in Police Constable's Treatment | The National Human Rights Commission has issued notices to the Chief Secretary, Government of Delhi and Union Home Secretary after taking suo motu cognizance of a complaint accompanied by a media report alleging negligence in the treatment of Delhi Police constable Amit Kumar who died due to Corona infection.

Ex Gratia of Rs 2 Lakh for Kin of Migrants Run Over by Train | PM Modi approves ex gratia of Rs 2 lakh each to the next of kin of 16 migrants who were run over by a goods train near Aurangabad in Maharshtra.

Ex Gratia of Rs 2 Lakh for Migrants Run Over by Train | PM Modi approves ex gratia of Rs 2 lakh each to the next of kin of 16 migrants who were run over by a goods train near Aurangabad in Maharshtra.

Siddaramaiah Alleges RSS Giving Communal Colour to COVID-19 | Former Karnataka chief minister Siddaramaiah alleged the RSS was giving a communal colour to the coronavirus issue in India by blaming the Tablighi Jamaat for the COVID-19 spread,prompting a strong rebuttal from the BJP. CBI Alerts State Agencies about Narco-trafficking using PPE Consignments | The CBI has alerted state police and central agencies about possibility of narco-traffickers using consignments of COVID-19 protective equipment to conceal their contraband after an Interpol input in this regard, officials said. The central agency has received inputs from the Interpol that international drug-traffickers are taking advantage of the pandemic scenario to conceal their possible shipments in protective equipment consignments.

3-month Plan Needed to Deal with Crisis: Mamata | An early relief from the COVID- 19 crisis is unlikely, West Bengal Chief Minister Mamata Banerjee said on Tuesday, and underscored the need for a three-month plan to deal with the situation. Banerjee also claimed that people were facing problems since the imposition of the lockdown on March 25 as the move was "poorly planned".

Civil Aviation Ministry Issues Guidelines | Ministry of Civil Aviation issues SOP to all aviation stakeholders including airlines and airport operators before flight resumption. People above 80 years of age to be restricted from travel in phase I of flight resumption. No cabin baggage in initial phase, checked-in baggage to be only one piece(<20 kg). Passengers and staff showing any symptom, Aarogya Setu app not showing “green” are not to be allowed to enter the airport terminal building.

2 Trains Depart from New Delhi Station | As the Indian Railways resumed its passenger services, two trains chugged out of New Delhi on time carrying 2,299 passengers on board. The New Delhi railway station saw the departure of two special trains for Bilaspur and Dibrugarh, around 50 days after the nationwide lockdown caused suspension of all passenger train services.

Meanwhile, Prime Minister Narendra Modi is set to address the nation at 8pm today, a day after he spoke to chief ministers of various states through video conferencing on the strategy to be adopted once phase 3 of the lockdown ends on May 17. The last time the prime minister had addressed the nation was on April 14.

India today crossed the 70,000-mark for Covid-19 cases while the death toll jumped to 2,293 with 87 fatalities in 24 hours. The active cases in the country stand at 46,008, while those cured are 22,454. The numbers come on a day when the country takes the first steps towards normalising public activity with the Indian Railways resuming passenger services on restricted routes.

The services will resume initially with 15 pair of trains, or a total of 30 journeys, the national transporter said, 51 days after the services were halted. Passenger trains will depart from New Delhi Railway Station and connect to Mumbai, Secunderabad, Bengaluru, Chennai, Ahmedabad, Howrah, Thiruvananthapuram, Patna, Jammu, Dibrugarh, Agartala, Bilaspur, Ranchi, Bhubaneswar and Madgaon.

The novel coronavirus has infected over 4.1 million people and led to the deaths of more than 2.8 lakh.

The United States recorded 830 coronavirus deaths in the past 24 hours, bringing the total to 80,352. The figure followed Sunday's toll of 776, the lowest daily tally since March, though major concerns remain over the number of deaths continuing to climb as some US states relax their lockdowns.

The country -- hardest hit by the pandemic in terms of the number of fatalities -- has now confirmed a total of 1,346,723 cases, the Baltimore-based school reported.