India does find itself in a better situation compared to many other countries, but there is a huge degree of variation in the mortality rate for different states.

While the number of Covid-19 cases in India is now rising at a quick rate, there is a big positive statistic which has gone largely unnoticed amid all the chaos and panic. The country’s mortality rate (deaths/cases as a percentage) is still among the lowest in the world when compared with other major countries gripped by the pandemic.

The mortality rate is, by far, a more significant ratio as it measures the actual loss of lives and while questions might be raised about India not testing enough, it is practically impossible to hide (in this day and age of media and social media) a high number of deaths.

Among the 22 countries with 10,000-plus cases, India’s mortality rate places it at the 14th spot. If we divide the countries into different clusters according to severity of death (depicted by colour) we see that India groups in with Ireland, Portugal and Canada and is in Cluster 6 of 8. 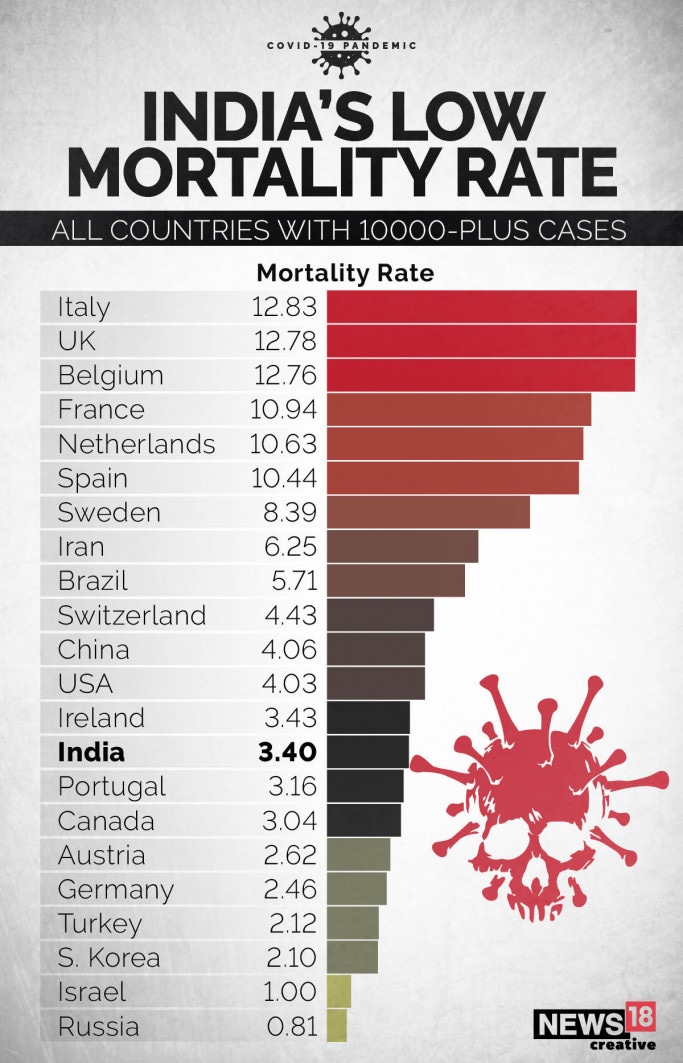 India has reported, approximately, 29 cases per death. This number hovers around 8 for countries like Italy and the UK. It also has a favourable tests/death ratio of 576 – the fourth-best among these 22 countries only after Russia, South Korea and Israel.

It is also logical to conclude that if and when India increases its testing the mortality rate and the tests/death rate will only improve (progression of increase in cases and testing is much higher than deaths).

While India would be hopeful that it can flatten the curve (with respect to number of cases) towards the end of the extended lockdown, the low mortality rate is very significant and a major success – whether due to strict policy measures and a stringent lockdown and a comparatively low percentage of above 65 population (6.18% in 2018) – whatever the reasons might be, the country does find itself in a better situation compared to many other nations.

However, a closer analysis within India tells us that there is a huge degree of variation in the mortality rate for different states/regions.

KERALA HAS THE LOWEST MORTALITY RATE IN INDIA

Kerala has been a model example for India. Not only has the state managed to flatten the curve for confirmed cases but also has the lowest mortality rate of just 0.53% among all states in India (with at least one death). Kerala has reported just 2 deaths despite Kasargod emerging as a super spreader and accounting for more than 40% of the state’s cases. 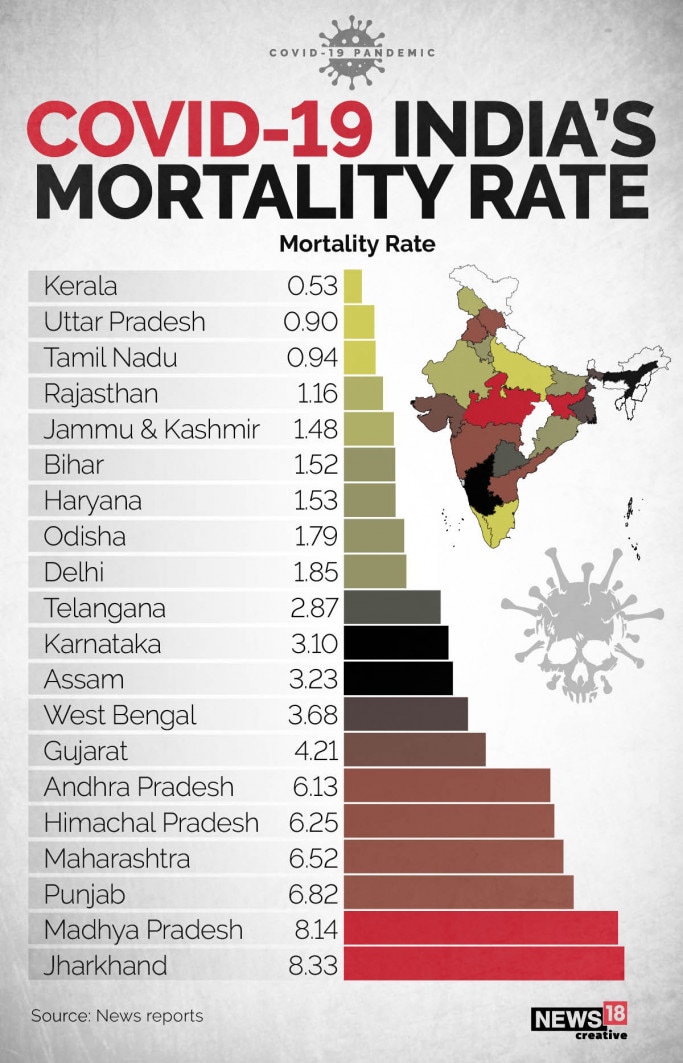 The state acted early, was proactive and adopted a slew of measures including contact tracing, isolation and surveillance. It had faced a similar crisis in 2018 with the outbreak of the brain-damaging virus Nipah, which, like Covid-19, had originated in bats and transferred to humans. Patient consulting, tracking their movements and putting in quarantine anyone in the chain of symptoms, top-class nurses and healthcare facilities, cooperation of civil society, religious leaders and media and aggressive and early checking at airports and the full support of the state machinery – the plan worked and Kerala seems to have won its second battle against a deadly virus in two years.

The Kerala health minister, KK Shailaja, has played a pivotal role in containing the pandemic in the state. In an interview to Gulf News, she said, “The primary level health network connects each and every person in the society. At the secondary level there are community health centres, taluk hospitals, district hospitals and general hospitals with speciality treatments. At the tertiary sector, there are medical college hospitals with super speciality facilities and sector-specific research and treatment centres like regional cancer centre, etc.”

Uttar Pradesh (UP) and Tamil Nadu are the other states which have fared well in containing the number of deaths in India with a mortality rate of under 1. The UP government has been particularly praised for its Agra model of containment where 1,200 teams screened over 9 lakh people in their homes, innovative technology methods such as use of drones was introduced and CCTV cameras monitored the infected people.

Tamil Nadu has relied on surveillance, containment and rapid testing. Chennai, which saw a surge in cases in April, conducted door-to-door surveys for every household in the city – a process which will last for 90 days. The state government also converted bus stations into farmer markets to ensure social distancing.

MADHYA PRADESH AND MAHARASHTRA AMONG THE WORST IN MORTALITY

The picture has been quite contrasting when one analyses the state of Madhya Pradesh. With 614 cases and the worst mortality rate of 8.14 among all states with at least 50 cases (Jharkhand has reported just 24 cases), the central-most state in India is in a critical situation.

Indore has reported 49 new cases in the last 24 hours, taking the total tally of confirmed cases in the city to 411 – more than half of the state’s cases have been from just one city. Even more worryingly, Indore accounts for 35 of the 50 deaths in Madhya Pradesh, i.e., 70%. Its mortality rate of 8.52% is the worst for any city in India. Just for perspective, the corresponding rate in Mumbai is 5.76% and Delhi is 1.85%.

Indore was declared the cleanest city in India for a third time in a row in the central government’s Cleanliness Survey last year.

Maharashtra has the highest number of cases in India – almost 1,000 more than the second-worst on this count, Delhi, whose 70% cases have a direct or indirect link to the Tablighi Jamaat Markaz in Nizamuddin. Coupled with that is the high mortality rate of 6.52% and this is giving nightmares to the administration in Mumbai. Extreme congestion and co-morbidities are emerging as the major reasons for the high number of deaths in the state. More than 85% of Covid-19 deaths in Mumbai had co-morbidities such as diabetes, hypertension and heart disease.
Tags: